The Council motion is for Seaford Foreshore Activation - does that mean activation for development? Is it seen as an 'idle' asset - not useful or valuable as it is? It would seem so. As the proposal being put to Council is as follows

Why is this being done? The budget for this - just for the proposal - is $40,000. Why are Councillors initiating these sorts of projects when many people in Frankston are experiencing financial hardship? There is little doubt by economic commentators that we are entering a recession. Why are we spending money on this rather than looking to address the far more serious problems of homelessness, children going to school without breakfast and lunch?

Asking DELWP to remove protections from the Foreshore opens up major risks for the foreshore and is something that should be discussed with the community first - and only proceeded with if it has overwhelming support and even then only if other safeguards and protections are in place instead.

What is driving this and where does it come from? Certainly not the community, as requests by the Seaford Community committee to be involved in discussions were met with the following response:

This is a very concerning move by Councillors - I personally would be interested to know in what sense this proposal is representing the wishes of the community, and where on earth it came from. Is this just one Councillor's agenda? Is there a group of developers acting behind the scenes? Why has this suddenly emerged - above all the other pressing concerns of Council - as an item worthy of spending ratepayers precious money on?

The specific things that 'in-principle' approval would sought for from DELWP include:

Why do I think the preservation of a working fifty-year old bluestone toilet block, in the face of its unnecessary replacement by a production-line designed one, so important that I can bring myself to promote a change.org petition to save it? Because somehow this blocky polylith has shown the capacity to unite us, where we can agree on little else. We live in a very atomised society, suburbanites here in Australia, victims of change and population engineering. People find it difficult to agree on complex politics, but the toilet block is an obvious example of something that does not need fixing, but that someone is fixing to fix. It should be too small for the council to fight us over it, but since the council intends to replace all bluestone blocks, stopping this would obviously frustrate a significant financial transaction. Someone is benefiting financially from this overkill, but not us.

Somehow the threatened removal of the sturdy bluestone toilets symbolizes important elements of our disempowerment. Some of these are our resentment at impermanence, our growing lack of local self-determination, lack of real consultation in favour of manufactured consent, industrial design over artisanship, synthetics over stone and trees, abuse of authority, planning facism, consumerism, delocalisation of decisions, spin replacing argument, and corporate beneficiaries taking over local employment and manufacture.

Our state-ruled local government has different values from many of the locals. These values are for the imposition of unnecessary new infrastructure of banal style and flimsy construction in place of something that anyone can see is durable and which has taken on the thermodynamic patina of age and locality – a sign that it belongs. Somehow this toilet block seems the right place to make a stand. See the petition here or republished below. Frankston City Council plans to replace ALL bluestone toilets, rather than refurbish to make them compliant with new regulations.

The Seaford Community Committee (SCC) is supporting the many residents who have contacted us saying they do not agree with Frankston City Council’s plans to replace ALL bluestone toilet blocks with a new cheap-looking style. Together, a campaign has been launched to save bluestone toilet blocks in Seaford/Frankston, particularly on the foreshore.

Instead of demolition, please:
- retain & refurbish Frankston bluestone toilets (including those in the planning phase) to make them compliant with new regulations
- replace those already demolished
- include a shower or somewhere to wash sandy feet in refurbished toilet blocks

We wish to express our strong disapproval of the decision to demolish ALL bluestone toilet blocks in Frankston and to replace them with entirely inappropriate and offensive alternatives.

Perhaps you could accuse us of doing a 'dunny spit', but the replacement block opposite McCulloch Ave is an expensive eyesore that should not be repeated elsewhere along the Frankston-Seaford foreshore.  Indeed, we implore Council to reverse its decision and to reinstate the former bluestone toilet block opposite McCulloch Ave (as closely as possible to its original state), and terminate any plans to demolish and replace other remaining bluestone toilet blocks.

We have been contacted by many residents who feel the same.  Together, a campaign has been launched to save bluestone toilet blocks in Seaford/Frankston, particularly on the foreshore.

- http://www.seafordcc.org/forum/viewtopic.php?f=4&t=411 - Visit our Forum for more information and/or to download the paper version of the Petition to collect & return signatures
- http://candobetter.net/node/5476 - Opinion
- http://www.frankston.vic.gov.au/Your_Council/Media_and_Publications/Latest_News/Old_toilets_flushed_out - "Public toilets that no longer meet safety requirements are being progressively replaced with new facilities by Frankston City Council"

(Please only sign either this online petition or the paper version, so that we don't get duplicate names.)

In our view, the bluestone toilet blocks should be retained on heritage, environmental and economic grounds, as follows:

Heritage: the bluestone toilet blocks were built at least 50 years ago and form part of the collective experience and memories of families who have been enjoying the unique and distinctive bush-and-beach character of the Frankston-Seaford foreshore, often over two or more generations.  More widely, the 'dunny' has a special place in Australian culture and the bluestone toilet blocks are arguably one of the best examples of seaside lavatorial architecture in the post-WW2 era.  As such, the bluestone toilet blocks should be preserved as an important part of our local and national cultural heritage.  Conversely, their replacement block opposite McCulloch Ave, Seaford has no architectural merit whatsoever and neither it nor any replicas will ever attain the iconic status of their bluestone betters.

Environmental: the scale and colour of the bluestone toilet blocks are in complete sympathy with the surrounding indigenous seaside vegetation, as they nestle below the main tree canopy and blend in closely with the typically grey-green trees and shrubs.  Unlike their replacement block opposite McCulloch Ave, which is ugly and offensive to the eye, the bluestone toilets have no disruptive or deleterious visual impact on the attractive foreshore vista whatsoever.  We are also deeply dismayed by the excessive and unnecessary removal of surrounding coastal banksias and other indigenous trees during and after its construction.

Economic: the bluestone toilet blocks are rock solid, low-maintenance and long-lasting constructions that require a minimal allocation of Council/ratepayer resources to maintain.  They are largely immune to vandalism.  Conversely, replacement blocks (e.g. opposite McCulloch Ave) involve an unnecessarily large outlay to construct and will undoubtedly attract vandals and generally be a more expensive facility to maintain.

It seems we are losing our natural foreshore by a process of stealth. The Seaford community has fought for years to retain the beautiful natural bush land along the foreshore. It is, and has always, been at risk. I have spoken to people who would like to see the bush removed and grass and palm trees planted all along there. But we have resisted this. We have also resisted repeated pushes for hard paths through the bushland (for bike access). But not-so slowly we are seeing the foreshore change, gradually more and more of it is being developed, paved and covered with boardwalks, and even street-lighting in the bush area: 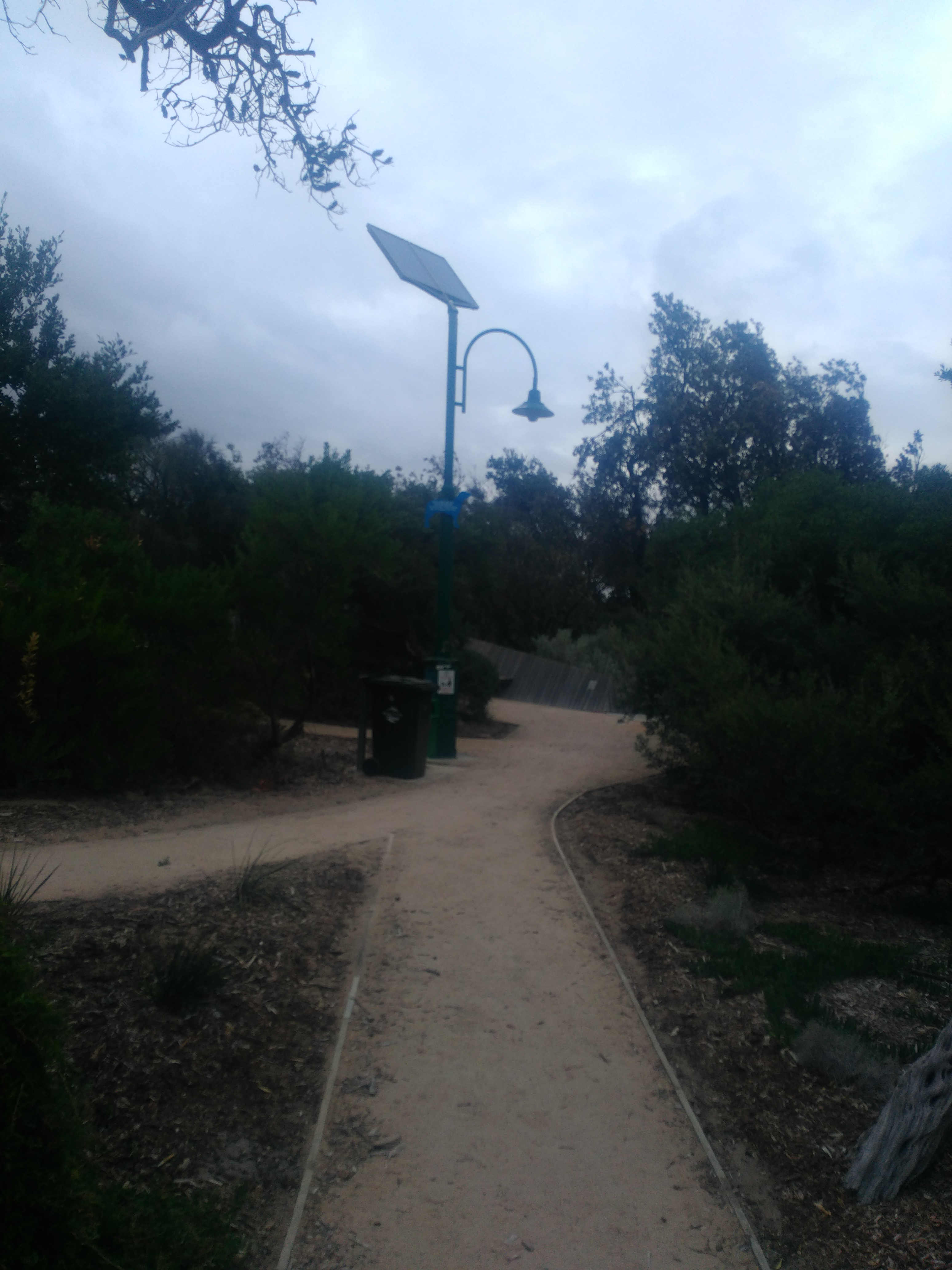 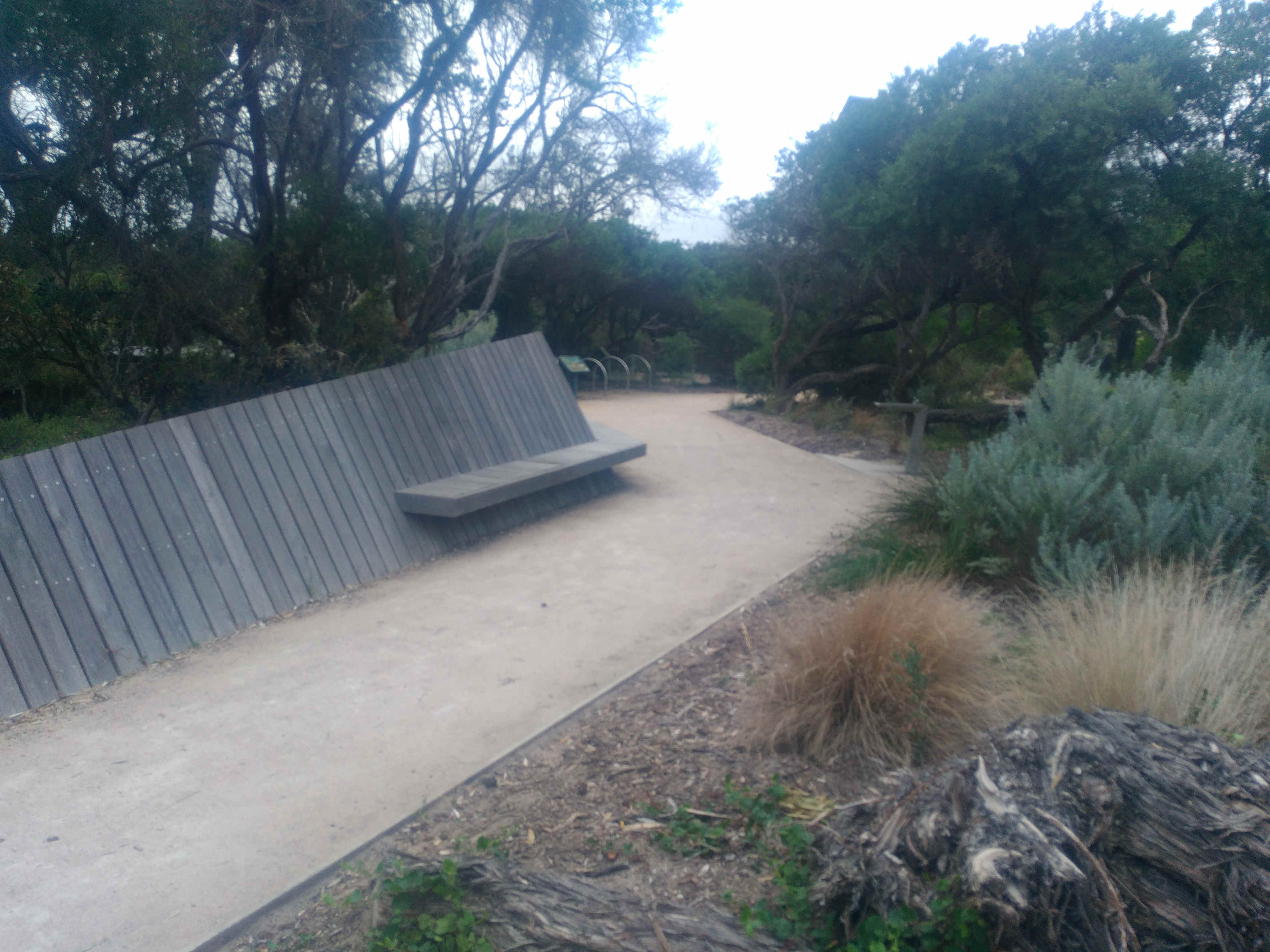 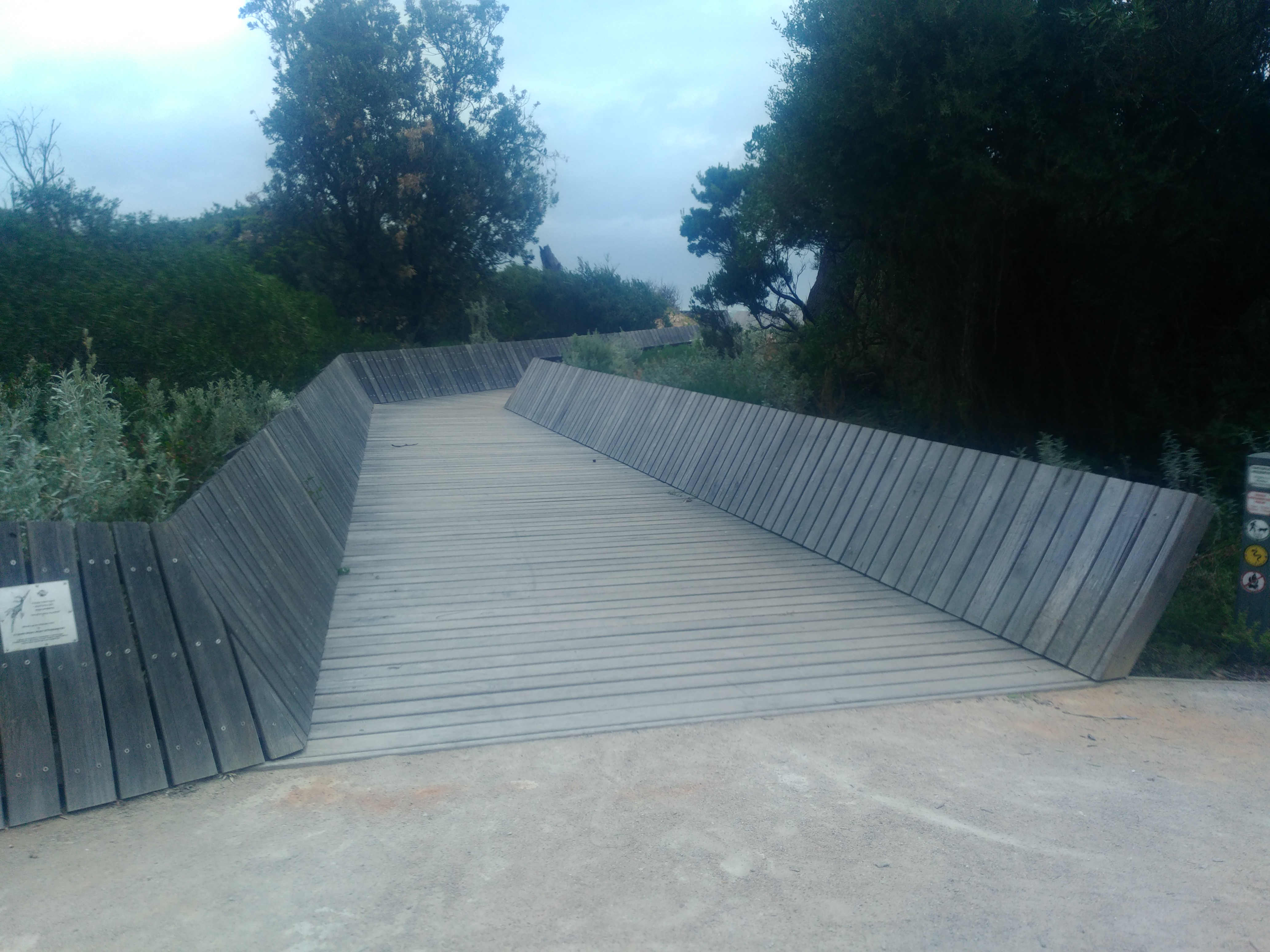 Much of this onslaught is by our own Council, who now are replacing the blue stone toilet blocks - which sit naturally and unobtrusively in the bush: 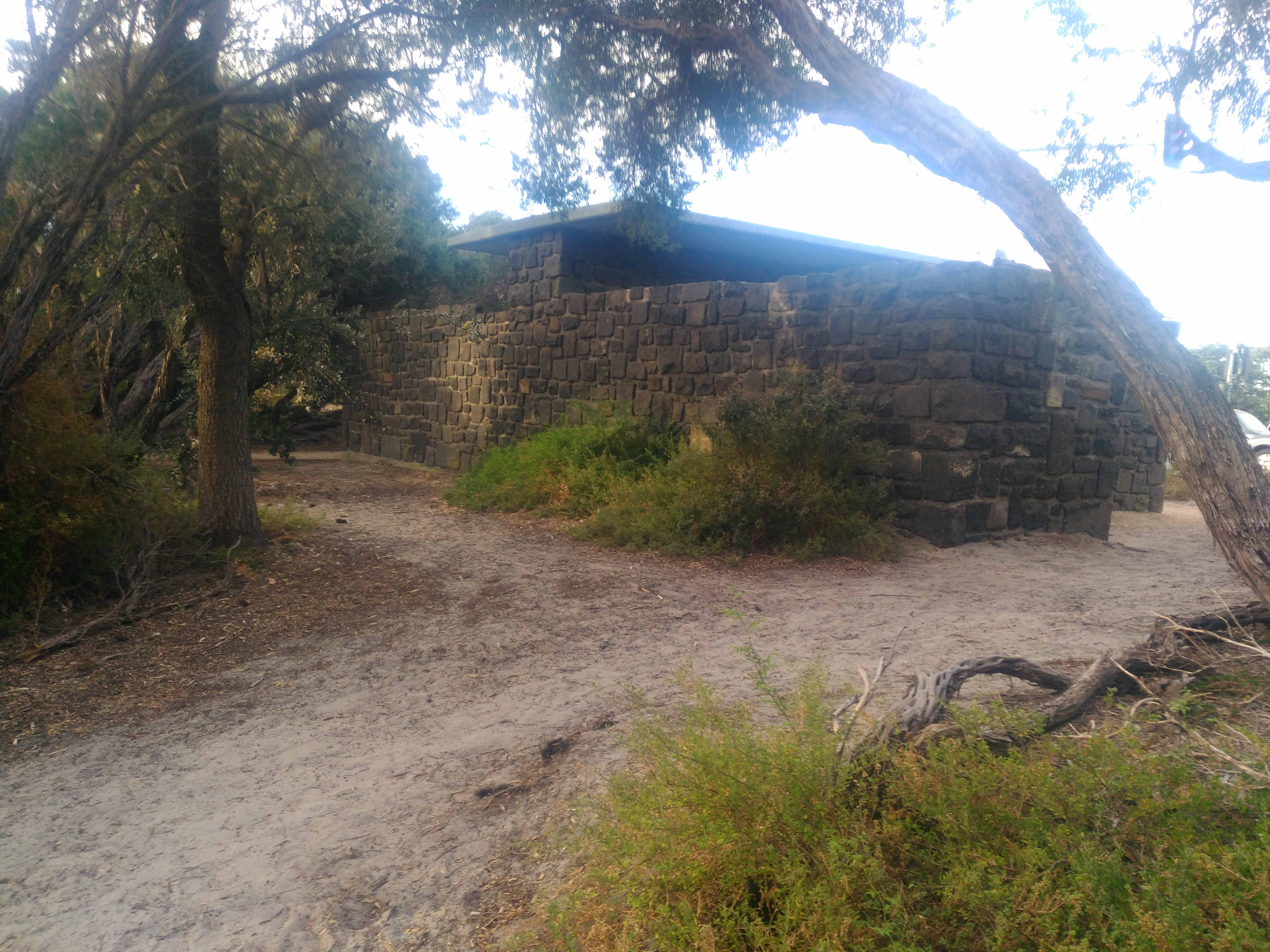 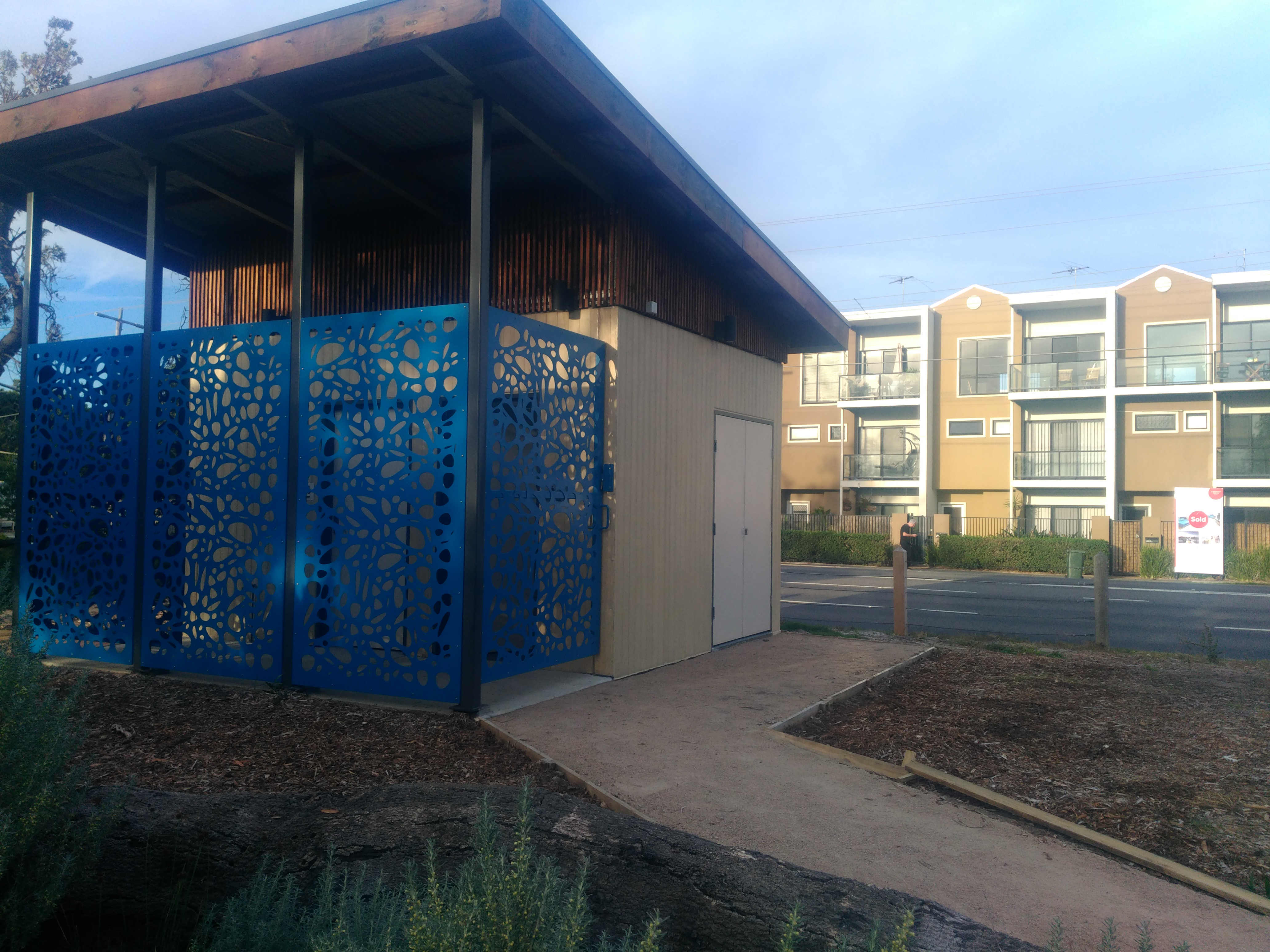 Which seem to need a large amount of bush to be cleared around them: 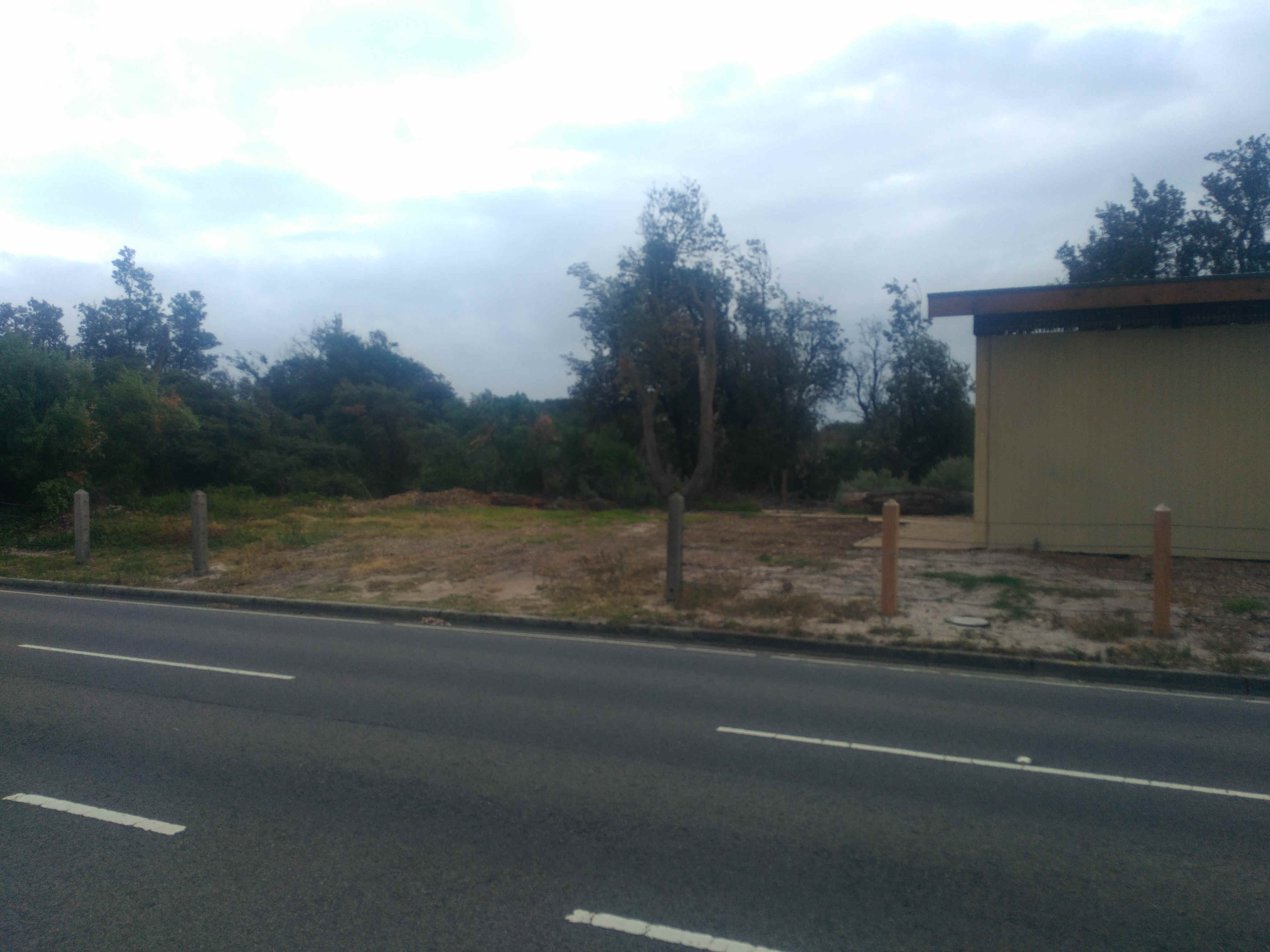 I communicated with Council about this (see extract below) and I was told that in large part this was to allow access for disabled people - this sounds very noble, except if you go to the new toilet already built (opposite the caravan park) you find the DISABLED TOILET LOCKED (i.e vacant, but inaccessible) - so much for the lip service of caring for the disabled! 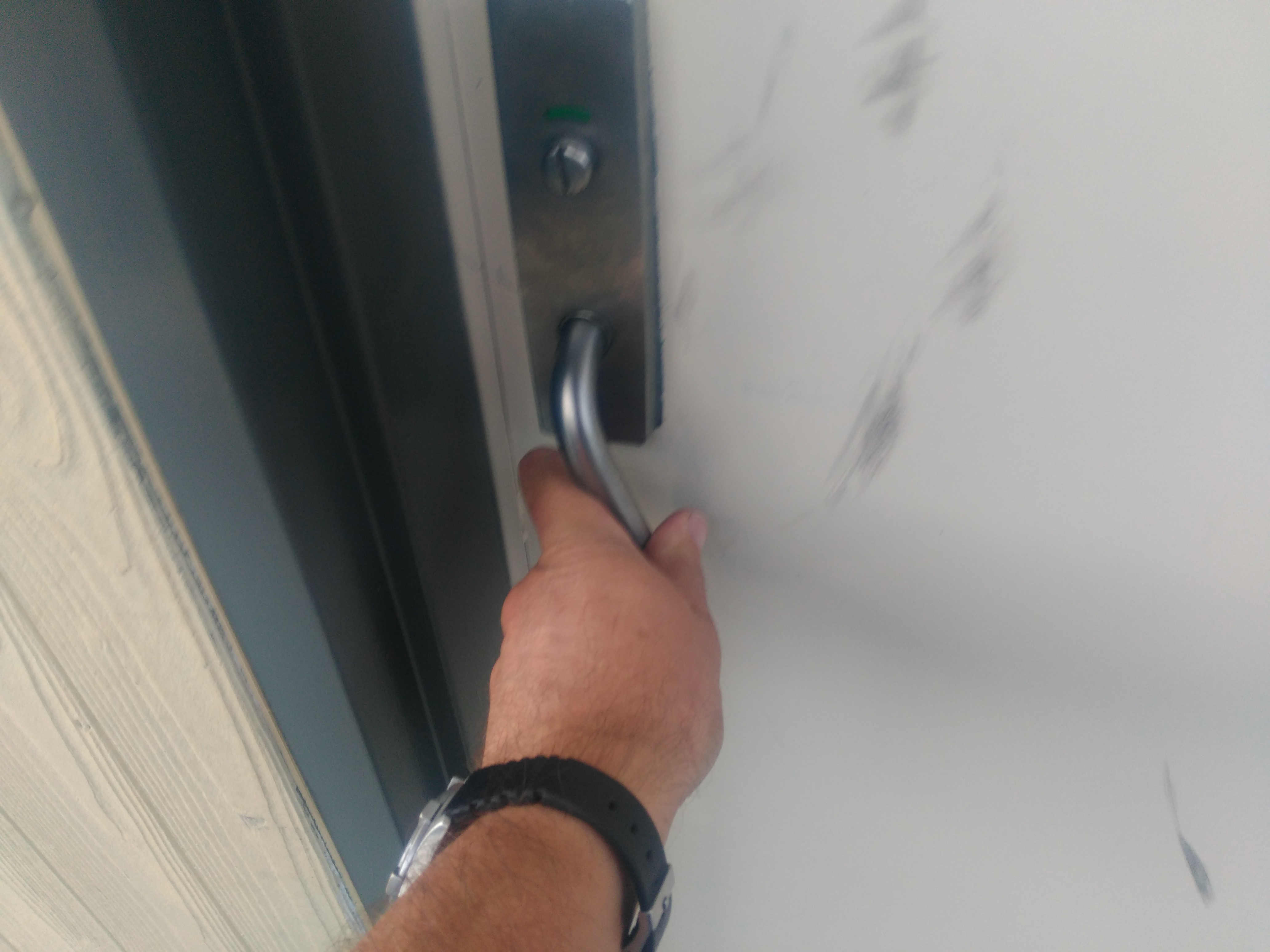 The second issue was regarding cleanliness and graffiti resistance. The current bluestone toilet blocks have very little graffiti, and it is never been bad enough for me to really notice - so either it is not happening, or it can be removed. 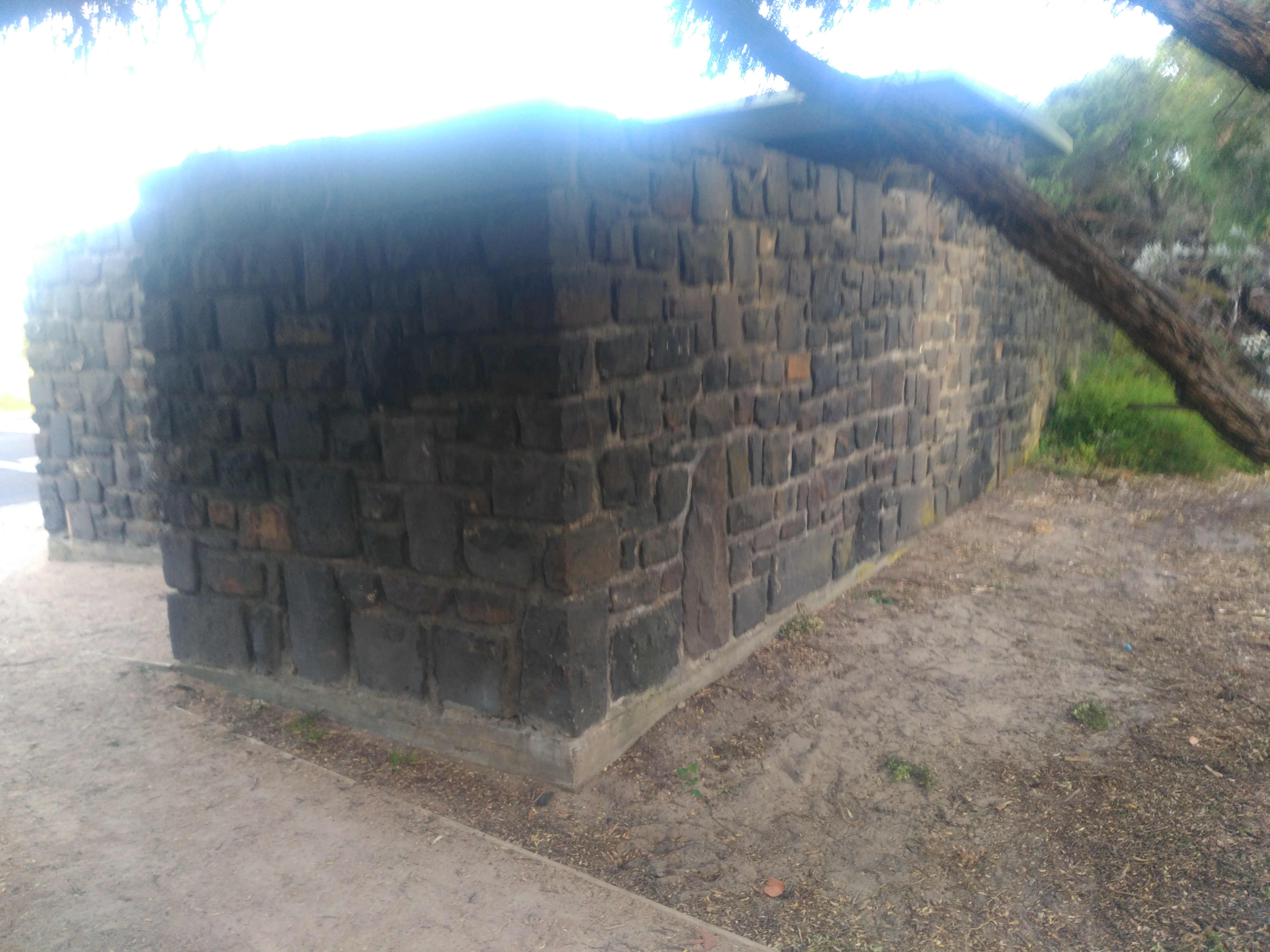 As for cleaniness, the toilets are at time of writing quite unclean. One resident even reported the cleaner arriving while she was there photographing the mess, but the cleaner just left after looking in the toilet, and didn't bother to unlock the disabled toilet. 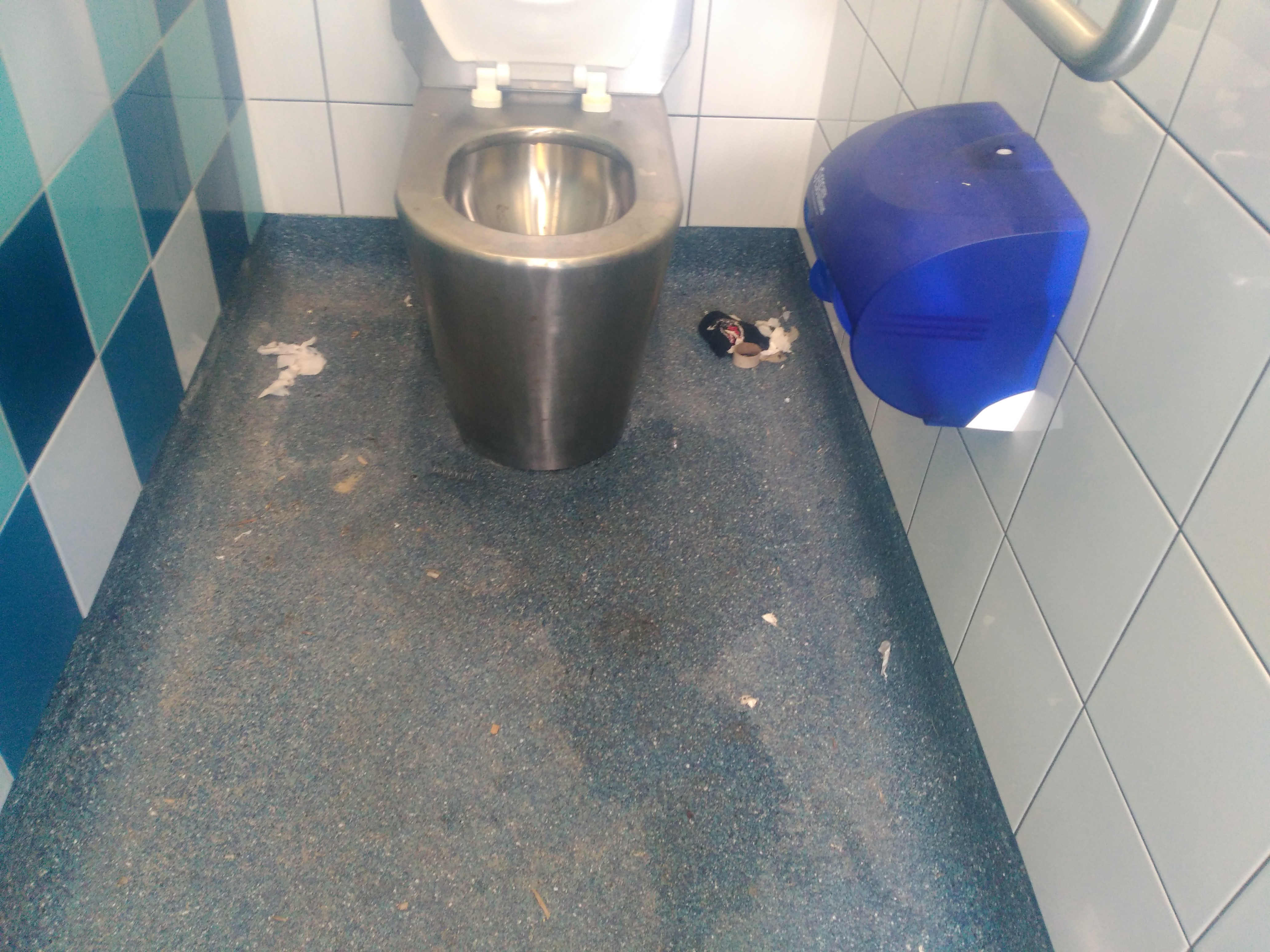 So we are seeing our beautiful historic toilets being removed, under these pretexts. I would appreciate it if anyone could let me know if they have connections to representatives of the disability community - because I really do wonder if we need ALL the toilets on Seaford foreshore to have disabled access? Currently there is disabled access at:

I know people who have needed disabled access, and they have said they only would expect (and need) only one or two places to access the beach.

Here is Council's justification for the works:

As previously mentioned, Council want/need to cater for all abilities, provide safe, inviting and user friendly/comfortable facilities which are easy to clean and maintain. While also presenting a universal design language with modern and compliant facilities throughout the Municipality. In 2011 Frankston City had over 60+ public toilets, with a large number of these amenities requiring replacement, removal or upgrade to meet Australian Standards as well as the future needs and expectations of the community.

The public toilet action plan which covers all of the existing public toilet amenities across the municipality, this informs our capital works program over the coming 10-20 years to ensure public toilets are prioritised.

The facility at Armstrongs Rd is listed as being removed and replaced and at this stage is on our program during FY19/20.