It is likely to be just as nasty as the one on same sex marriage with all sorts of accusations that target people rather than immigration policies. There will be a rash of claims made against Asians, Muslim, Middle East, and African migrants matched in venom by attacks on the WASP (White, Anglo Saxon Protestant) Rednecks who dared to question their suitability to be citizens. Just like the SSM debate very few people will be persuaded by the opposing claims and instead will only be entrenched further in their own beliefs. 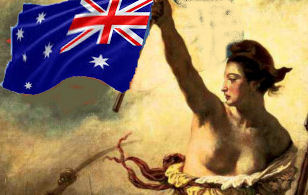 Some of the opening salvos from politicians have already been fired - Scott Morrison has said cutting immigration will cost the economy more than a billion a year which seems like small beer alongside his proposed $64b in tax breaks. Tony Abbott, perhaps sniffing the wind, has called for a cut of 80,000 per year which would bring the rate down to that set by John Howard. Bob Carr wants the present immigration number halved, the Greens want it increased by 50,000, the Sustainable Population Party wants it cut back to the pre-Howard level of 70,000 and the Scientific community say we have already overshot our sustainable numbers - but then nobody listens to the science. However, perhaps the most insidious pro-immigration argument – one that has been aired many times – is the claim that Australia is the best in the world when it comes to accepting different cultures. It’s the sort of feel good statement that appeals to our vanity, a bit like being told we are the best sporting nation, so consequently very few people bothered to challenge Chris Bowen MP the former minister for immigration when he said were indeed the world’s most successful multicultural nation. So while we all sat back and marvelled at how wonderful we are, no one remembered that the other major culture in our society is our indigenous population who, given the level of disadvantage they experience, have good grounds for disagreeing with the statement.

And they would not be alone. Bowen's appeal to our good nature was probably an attempt to detract from the negative comments made earlier by German Chancellor Angela Merkel, who said Germany's attempt to create a multicultural society had failed completely, while Dutch Interior Minister Piet Hein Donner presented a bill in parliament that read:

“The government shares the social dissatisfaction over the multicultural society model.... A more obligatory integration is justified because the government also demands that from its own citizens. It is necessary because otherwise the society gradually grows apart and eventually no one feels at home anymore.”

It was a sentiment echoed by Britain's former Prime Minister David Cameron, France's former President Nicolas Sarkozy, Spain's former leader, Jose Maria Aznar, and Belgium's former PM Yves Leterme. Indeed most of Europe is of the same mind with many seeing the rise of extreme right wing political parties as a direct result.

In fact MC has had a dismal record almost everywhere around the globe. Czechoslovakia fell apart and it’s not going well in Ireland. Scotland is not happy in GB, and the US, once the poster boy for immigration, seems to be on a race-related downward spiral. China spends an estimated 1.24 trillion yuan ($193 billion) on its domestic security system mainly in areas with major populations of religious and ethnic minorities; an amount that is more than its spending on external security.

However, while there are many MC problems in Europe, they pale in comparison to those countries that have fallen into internal conflict, the result often descending into ethnic cleansing. This is a relatively new term that originated in 1992 when, in the former country of Yugoslavia, the Serbians tried to drive out the Muslims of Bosnia-Herzegovina. The process is, however, as old as human history and the number of victims as large as human diversity. Even if you don't believe the biblical account of the Passover the Jews have been persecuted at least since the Roman era, a process that continued intermittently in most nations, culminating in the holocaust, an event in which most of the Nazi-occupied nations participated. More recent atrocities such as those in Myanmar, Rwanda, Tibet and Sri Lanka have received much media attention but the murder of about one million Armenians, Assyrian’s and Greeks during the chaotic collapse of the Ottoman empire was largely ignored by a world lost in its own troubles. Unfortunately other such crimes, like the actions of Indonesia in east Timor and Papua, which are ongoing in the latter, are ignored for political reasons.

One list of the 10 bloodiest civil wars of the twentieth century (Sarkees 2000), half of the cases were ethnic conflicts and these all involved minority groups that were identifiable by religion, color, language or culture. The outbreaks of violence were usually triggered by factors such as unemployment, food prices, exploitation or repression, problems that are increasing in Australia. Over the last decade or so, Australian governments have considered it necessary to respond to a perceived terror threat by increasing ASIO's budget 471 per cent over 9 years.[1] Athol Yates, executive director of think tank the Australian Security Research Centre, has calculated that Canberra has spent about $10.5 billion on homeland security, while state and local governments plus private industry have forked out another $5.5 billion, taking the total domestic security bill to about $16 billion. Oddly enough this expenditure increases our GDP allowing politicians to boast about the economic benefits of Multiculturalism but in reality the real success for governments has been the division it has created in the population, enough apparently to divert attention away from our absurdly high immigration rate.