On the nights of February 11, 12 and 13, 2020, the ABC has shown three related 15 minute pieces in its 7.30 Reports, on the subject of housing. These segments have stressed the cost of housing and the gulf that exists between those who are able to afford or who own their house, comparing the situation of people who cannot afford a house, and who are thus obliged to rent. These programs have, however, completely failed to talk about Australia's extremely rapid population growth, which now requires the construction of the equivalent of a Canberra every year, [corrected 15.2.20] just to preserve the ratio of housing supply to housing demand. Most flagrant omission of all, the ABC says nothing at all about the fact that this is intentional government policy. We publish a letter of complaint which was sent to the ABC on this matter. 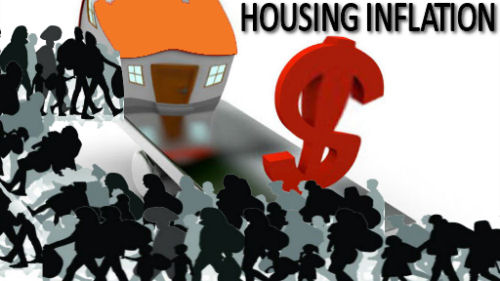 I am one of the Renter underclass. The 7.30 series that you ran this week was biased and extremely cruel to someone like myself. I pay higher than average rent so am luckier than those lower down on the income spectrum, although I live extremely frugally. The problem is that because I don't yet have a deposit for a home loan, which I could easily be paying off instead of rent I am locked out of the property market while filling the pockets of my wealthy overseas landlord. Due to my mature age I may never have secure housing and the risk of homelessness is a glaring reality for me. You did not mention overpopulation as one of the major causes of high property prices. I'm not surprised because the ABC, as far as I can see, has a policy of never uttering the O word. Secondly why is it fair that someone who already has a home can be helped by the government to build their private wealth while those of us in the underclass are hindered from attaining housing security and endure every privation that accompanies that situation?

The property developers build housing and make sure that the government allows hundreds of thousands of non humanitarian immigrants in each year so that property prices don't fall. Furthermore one of your guests accused certain people of nimbyism. That is unjust. Many people who oppose overdevelopment and the environmental and social damage that it causes oppose overdevelopment everywhere. Another of your guests said that high rise buildings are the answer to more affordable housing because they are more environmentally friendly due to their smaller foot print and they are better socially. Wrong, high rise buildings are more energy intensive and damage the environment. Socially, they generally isolate residents from one another. The ABC needs to be more balanced in it's reporting because the consequence of being narrow in who you represent allows injustices to continue. Talking about overpopulation is not racist as is explained in Katherine Betts' book "The Great Divide".

B. Wildered (Not real name.)

House prices are higher in Sydney and Melbourne than in almost all other developed-nation cities with the result that most young households cannot afford to buy a detached house. Why? Part of the explanation is a combination of generous tax benefits to investors and upgrading home owners. This has prompted massive investment in dwellings, but mostly in established detached housing. This investment drives up prices without adding to supply. New research report, 3 July 2018Bob Birrell and Ernest Healy, Immigration and the Housing Affordability Crisis in Sydney and Melbourne

However these investors and upgrading home owners are competing for detached housing with large numbers of young resident and migrant households. Tax advantages together with high levels of immigration-fuelled population growth have meant that there has been only one way prices could go; that is up.

The Greater Sydney Commission along with the Grattan Institute and the Reserve Bank (as well as most planners and commentators) assert that the solution to the affordability crisis is to abolish zoning constraints on medium-density housing in existing suburban areas.

This study indicates that the abolition of zoning constraints will not solve the affordability problem. This is because the price escalation Allfor detached houses has simultaneously pushed up the site costs for potential new medium-density housing. The result is that developers cannot produce affordable family-friendly units or town houses on these sites.

In the recent past, in both Sydney and Melbourne, zoning constraints in established suburbia have been relaxed. However, the study shows that this has not led to significant increases in medium-density housing, for precisely this reason. We argue that a further relaxation of zoning rules will not work in the future.

The encouragement given by both the NSW and Victorian state governments to the construction of high-rise apartments has also not worked to solve the affordability crisis. This is despite the jump in the number of such apartments in both cities over the past few years. This supply has not solved the problem because apartments do not meet the needs of most new resident and migrant households, needs which are primarily for family friendly housing.

A cut back in migration has to be part of the solution to Sydney and Melbourne’s housing affordability crisis.