We republish the article below from Freenations net which reports that US and British 'advisors' and 'instructors' to the Syrian opposition forces are trapped in Idlib. There are frantic attempts by the USA and Britain to ask Turkey or Russia to help evacuate these troops. But Britain has refused to co-operate with the Russians! [Article first published 7 September 2018 at http://freenations.net/200-british-and-us-troops-trapped-in-idlib/.] We have placed a video discussing this article from Israeli News Live channel on youtube at the beginning of it. Note that Israeli News Live is religious and finishes on a bunker mode, but the discussion preceding is not religious.

Sources in Russia and Syria, some known indirectly to me through a reliable contact, have reported that US and British “advisers” and “instructors” to the Syrian opposition forces are trapped in Idlib. There are frantic attempts by the USA and Britain to ask Turkey or Russia to help evacuate these troops. But Britain has refused to co-operate with the Russians!

The local opposition forces in Idlib include tens of thousands of extreme Al Qaeda related elements like Hay’at Tahrir al-Sham (HTS) many of whom were given safe passage out of other parts of Syria recaptured by Government forces. Turkey which backs the National Front for Liberation has asked Russia for time to isolate HTS in order to forestall an attack.

he also admitted that the farcical western policy of sending

“tens of thousands of tons of weapons and looking the other way as foreign fighters come into Syria may not have been the best approach. Al Qaeda has taken full advantage of it and Idlib now is a huge problem.”

The fall of Idlib would be the end of the last rebel held province and would open up the main highway through Syria from Jordan to Turkey. Syrian Government troops are massing for an attack, Russian ships have gathered off the coast at Tartous and the final phase of the Syrian war looks imminent.

There are 200 British and US instructors, doubtless with important weaponry and intelligence, are trapped and the UK wants the Turks to evacuate them to the Incirlik airbase In Turkey. This was apparently refused.

So now the US is begging Russia to help – just as the US and UK representatives at the UN attack Russia on the Salisbury poisoning!! But the British army contacts are not cooperating with the Russians – why?

Russia has been warning for weeks of yet another false flag chemical weapons attack organised by the (UK Intelligence services founded) “White Helmets” and there are rumours that Russia has the names of chemical weapons handling specialists amongst the British trapped in Idlib. The reason why the British army has refused to co-operate with the Russians might be that some of these British specialists have embarrassing “specialisms”!

This is not the first time that the USA and the UK have asked for Russian help to save their troops in Syria. Freenations reported in December 2016 that 230 US Army instructors and 54 British troops, 8 French and two Dutch artillery specialists were trapped in Aleppo with ISIS jihadists by Syrian and Russian forces. http://freenations.net/british-us-troops-alongside-jihadists-aleppo/

I have other sources who can not be disclosed.

Candobetter.net Editor: see the map below from the New York Times, which shows how close the 'official' if illegal US military presence is to Idlib. 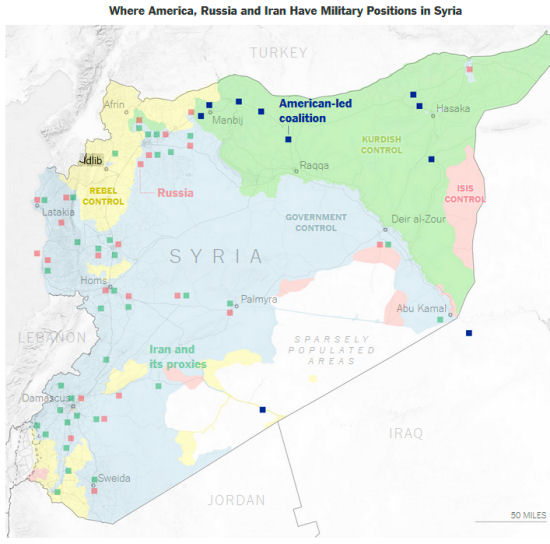