On Saturday 4 November 2017 Saudi Prince Mohammed bin Salman placed “30 of Saudi Arabia’s most senior figures, among them blood relatives of senior rulers,” as five-star prisoners at the Riyadh Ritz-Carlton, “accused of corruption”. [1] A year later most, possibly more, remained locked up and shaken down.[2] Many of them were billionaires. This must be the only country that locks up billionaires, especially if they are relatives of the ruler. The ‘corruption’ charge may be true, but it also serves as an excuse to control the activities of rivals to the throne and their supporters. Although such practices are not unknown in elites outside Islam,[3] this it is very traditional in the Ottoman Empire sense. Before the 16th century Ottoman rulers used to execute all their rivals. When Suleiman came to power in 1520 he commuted this to simply locking princes up in a big harem, where, “they were kept in a perpetual state of preadulthood, denied the right to marry or to father children by concubines.”

I quote from some of a fascinating history of such practices in the Ottoman Empire – part of a much larger multi-author anthropology book on palace women [and men] all over the world. The quotes below come from Leslie P. Prince, “Beyond Harem Walls, Ottoman Royal Women and the Exercise of Power,” in Anne Walthall, (Ed.), Servants of the dynasty, Palace women in world history, University of California Press, 2008, p.85-86)

Harems were not confined to women; they were private spaces in households and sometimes men were kept there. 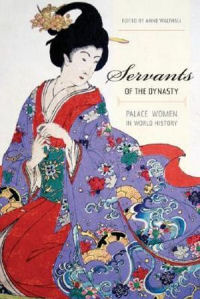 “The system of succession that prevailed in that period [before Suleiman’s accession in 1520] – all princes were considered eligible for the throne and the heir was the one who could eliminate all other claimants – inevitably rendered them rival foci of political factions. Each prince was accompanied to his provincial post by his mother, who was expected to support her son’s efforts to win the throne. The practice of fratricide (whereby, in the interests of security, a new sultan executed his defeated brothers and their sons) meant that both a prince and his mother had as their highest priority his political survival. Only a mother of a victorious prince would return to the imperial capital, as queen mother to the new sultan. The fate of a royal wife or concubine thus depended almost entirely on that of her son. [...]

[In the 16th century, with the accession of Suleiman in 1520] The last support in the edifice of dynastic decentralization – the princely governorate – was dismantled by Suleiman’s son and grandson. With the demise of their political role, princes became faceless individuals, strictly confined to the palace; there they were kept in a perpetual state of preadulthood, denied the right to marry or to father children by concubines. By the end of the sixteenth century, no members of the royal family except the sultan left the capital. Indeed, the only members of the family to leave the palace residence were married princesses. As a consequence, the imperial harem expanded greatly in size as it absorbed the suites of mothers and sons and acquired the requisite administrative structure."

[1] Phrasing and documentation of this incident from Martin Chulov, “How Saudi elite became five-star prisoners at the Riyadh Ritz-Carlton,” 7 November 2017, https://www.theguardian.com/world/2017/nov/06/how-saudi-elite-became-five-star-prisoners-at-the-riyadh-ritz-carlton
[2] https://www.washingtonpost.com/world/a-year-after-the-ritz-carlton-roundup-saudi-elites-remain-jailed-by-the-crown-prince/2018/11/05/32077a5c-e066-11e8-b759-3d88a5ce9e19_story.html?utm_term=.6b3dd97cff44 and https://www.tatler.com/article/ritz-carlton-in-riyadh-arrests-saudi-princes
[3] One is reminded of Trump vs Hillary, "Lock her up!" and we are also seeing a bit of this by anti-Trump aspirants in the Mueller Russia probe in Washington at the moment. Anyone studying the history of ruling classes understands the utter corruption of power, with rulers knocking off their rivals all through history, although not usually ALL their relatives, then proceeding to substitute slaves and immigrants.