Each spring I feel a tinge of grief when magnolia buds appear.
For I never see the glorious display I yearn for every year.
I might see a hint of pink withstanding every storm
But the elaborate blooms I see next door on my tree are still- born.

I know who is responsible, a possum small and shy,
I feed him in the vain hope that he will my tree pass by,
Although my ploy has never worked I keep it up from habit
And I never In my wildest dreams would take my knife and stab it! 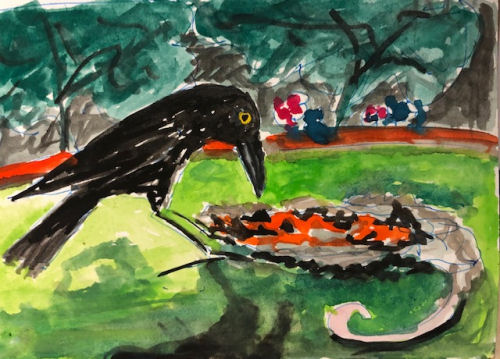 I met him one night on the fence; he froze upon his feet
What right had I to stand right there when he was passing on his beat?
In all the years I've felt the need to leave him something yummy,
He never speaks and never looks, just puts it in his tummy.

From today at start of spring my blooms may have a chance,
I saw some fur upon the lawn and from my window looked askance,
Oh what awful savagery has happened in my tame garden?
I must go outside and know the truth, my feelings I must harden!

Yes, torn and ripped my possum lies all spread out on the grass
His stomach, full is tossed aside, no use to he who broke his fast
Looking up, a butcher bird with innocent expression
Too small is he to do this deed but will not say no to its digestion!

Minutes on I saw a large black crow alighting on the scene
Pulling apart from near the heart the meat that had once been
Little ring tail quiet and shy, no personality to speak of
But meant the world to his family who now can only think of.........

I have just learned, regretfully, of the death of Jay Hanson. My first report was that it occurred in a diving accident. Subsequently it has been clarified that he fell ill after diving, and died that night. Jay Hanson lived in Hawaii. He was the founder of multiple energy resources or peak oil lists from the 1990s, starting with the incredibly popular Dieoff website and DieOff list which looked at peak oil, population numbers, and scarcity. An intermediate list was Killer Ape-Peak Oil. The last list of which we are aware was [America2Point0] which Hanson closed 'until further notice' on 20 December 2016. Hanson was teetotal for many years and studied evolutionary psychology. He believed that humans would be ultimately unable to deal with resource scarcity or human induced climate change because they could not cope with major environmental and evolutionary problems involving themselves. 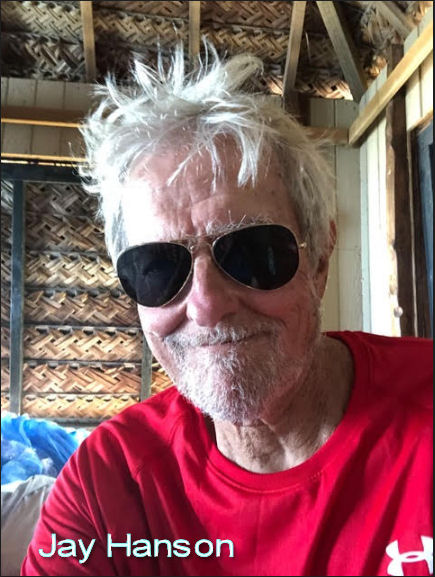 His list gave rise to a number of other lists, such as EnergyResources and ERT, as people formed different views on the energy resources and human survival outlook.

Jay Hanson's dieoff page can be found in its old and new forms by clicking on the links: http://www.jayhanson.org/oldindex.htm and http://www.dieoff.org/. There is a 2003 interview by Scott Meredith at http://www.oilcrash.com/articles/hansn_02.htm. It was my own participation in the DieOff list and subsequent ones, especially EnergyResources, and then the Australian Running on Empty one (roeoz) that caused me to edit two editions of a multi-scientist authored book called The Final Energy Crisis, Pluto Press, UK, 2005 and 2008. The first edition was initiated and partly edited by Andrew McKillop, and finished by me, Sheila Newman, and the second edition, in 2008, was entirely edited by me, with mostly new articles.

The whole 'peak oil' and energy resources debate or story or study is not over by any means. Fracking is a desperate and ruinous sort of pause, which has been used to crank up demand. It seems that we have already entered the oil wars, however most of the public have little ability to understand this, due to the influence of the corporate press and similar on our education systems, which focus less and less on science and history. US-NATO activity in the Middle East, the East and South America - notably threats towards Venezuela - are signs of this.

Jay Hanson was a charismatic internet figure, and it seems odd today that his death is not being widely reported. He was likable, trenchant and a little despotic, with many avid and admiring acolytes and friends.

This article and obituary is a very quick response to the sad news. My condoleances to his family and close friends, and to the movement he began.