There is an accepted truism that when it comes to politics what appears to be a conspiracy is usually just the result of poor government decisions. It is a logical conclusion given that conspiracies require clever conspirators and politicians are generally not seen as being clever. This of course is not correct, its a belief acquired because politicians are continually criticized by the media and even more so by their colleagues.

Like or loath him John Howard was a smart politician – he did after all survive 10 years as PM and won an election after involving us in an illegal war in Iraq. Having said that, how many bad decisions can be made on one issue before we have to conclude that no government could be that incompetent without intent? 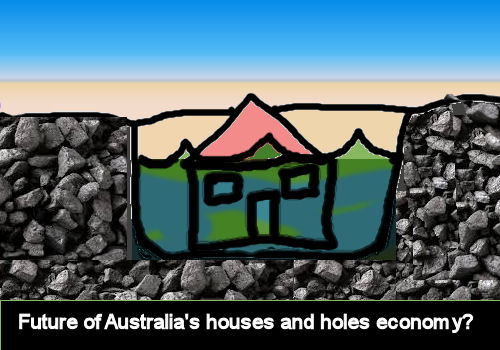 And how many bad decisions are allowed to continue because there has been a conspiracy of silence enforced by the need for party unity and the lack of whistle blower protection? Malcolm Turnbull managed to delay an inquiry into the banking sector, perhaps the only time he ever had the support of his entire party colleagues.

The fact that the then government was hounded by the opposition to hold the inquiry is seen as a vindication that a multi party democracy is self regulating and cannot provide the cross party cooperation needed to sustain a conspiracy.

However there have been instances when such cooperation feeds mutual self interest such as political donations or adherence to a mutually shared doctrine like market economics, something that occurred when Keating embraced the market ideas of Milton Friedman.

This meant there was no political party able to challenge the dangers of free trade or the reliance on an economy dependent on growth. Markets are about money, not morality.

In 1970 475,000 cars were made in Australia, the 10th highest rate in the world producing an export industry which saw cars shipped to Asia, NZ and the US. Australia was one of only 13 countries with the capabilities to design and develop mass market cars from scratch.

Much the same applied for rolling stock, buses, tractors and shipbuilding, which contributed $1.7 billion directly in value added to Australia’s Gross Domestic Product. At its peak, the ship construction industry employed approximately 14,600 people across a variety of occupations such as shipwrights, engineers, and naval architects, and supplied a defense industry as well as the local shipping industry, that is now almost all foreign owned.

Shipbuilding, like any manufacturing industry is a driver of innovation and we became the worlds best at producing fast ferries one of which (Incat) held the coveted Blue Riband award for the fastest crossing of the Atlantic ocean and was later acquired by the US navy, where they were built in the US under license.

We were also the 3rd nation to launch our own satellite from our own country because we had at that time a space industry.

Australia has now become a resource mine for the rest of the world, which leaves it unable to wean itself away from a resource based economy, and highly vulnerable to price swings in just a few commodities. This switch from a diverse economy was achieved through a number of economic decisions, which had the cumulative effect of limiting export opportunities and exponentially increasing our demand for imports.

In 2018 our total imports came to $A314.0b or about $A12,560 per person. But these were made up largely of goods we once manufactured in Australia: Machinery, cars, white goods, furniture, bedding, lighting and electrical components necessary to supply the 221,877 houses we build every year.

Australia now imports over 1million cars at a cost of US $29.4 b as well as $4.4b in spare parts which could have been made locally, all of which has to be paid for by exports, which are are predominately resources with coal, ores, precious metals and gas making up the majority, while Food (grains, meat & primary products) make up only another 13.9%. We are now one of the world's biggest exporters of non renewable resources with Newcastle as the worlds biggest coal port.

How dumbing down our manufacturing sector affects action on climate change

So if we want to take action on climate change we must buy the solar panels that were once made here, as well as the wind turbines and much of the electrics. We will have to pay for these with our resource exports by increasing mining or land clearing and then pay again for the machinery to dig out the minerals. And for every increase in population we will need to pay for that extra $12,560 he or she takes in imports. With a population growth of 395,100 last year this is obviously impossible. We have been conned by economists who used GDP as a indicator of success while aware that it remained insensitive to poverty, unemployment, mortgage debt and balance of payments.