The late Michael Crichton was partially right. The environmental movement in an increasingly secular society has assumed the mantle of Christianity. This is most particularly true, I would submit, in its obsession with motivations and intentions, as if nature gave a damn what we "intended". Too often those in the "environment justice" coalition choose politically correct pursuits and ignore their ecologically incorrect consequences. 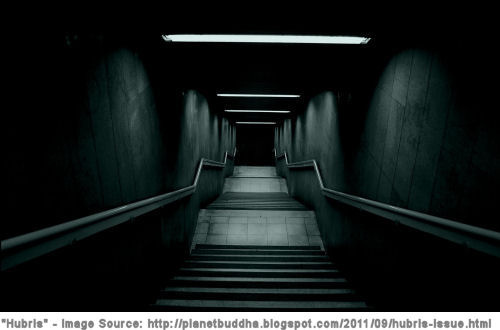 "Noble intentions are a poor excuse for stupid actions. Man is the only species that calls some suicidal actions 'noble' ".
Garrett Hardin

Noble intention: Encourage people to cut their personal waste and consumption.
Stupid action: Oppose effective measures to reduce the number of people who are doing the wasting and consuming.

Noble intention: To concentrate on ending income and wealth disparities within nations and between hemispheres.
Stupid action: To allow that focus to be exclusive of concerns about the total human footprint, which is largely unaffected by wealth redistribution. The equal distribution of rations on an overloaded lifeboat facing a Perfect Storm far off shore will not suffice to save it.

Noble intention: To fight racial injustice.
Stupid action: To assuage white guilt by assigning all responsibility for overshoot to the rich "North" and relieving the global poor of any responsibility for their irresponsible fecundity and its resultant environmental degradation.

Noble intention: To fight 'Islamophobia' and ensure that all Muslims are not categorized and treated as 'terrorists'.
Stupid action: To frame concerns about the impact of Islam on women's rights, democracy and most importantly, fertility rates, as "Islamophobic" and off the table.

Noble intention: Not to be sidetracked from the main task of reducing global population by religious or ethnic mud-slinging.
Stupid action: To let the Catholic Church in particular, and other denominations in general, off the hook for their criminal responsibility in pushing humanity to the brink of ecocide by fighting against birth control measures. Culture matters. And harmful cultural practices must be mercilessly attacked---whomever practices them.

Noble intention: To keep people focused on issues, not personalities or blame.
Stupid action: To let environmental organizations off the hook for their collusion with corporate donors who have paid them "not to understand" the role of immigration-driven population growth in environmental degradation. Ignorance is one thing, corruption is another. Nor is it smart or ethical to not to call green NGOs and fem-green left out for their despicable race-baiting, McCarthyist tactics in smearing and isolating those who try to put the "P" back into the IPAT equation where it belongs. Their tactics must not be rewarded with silence. Bullies thrive on passive non-reactions. I am from the east end of town. If Sierrans and Hartmanites push me, I push back. Only twice as hard.

Noble intention: To serve the interests of all humanity.
Stupid action: To frame the effort to restrict migration, control borders, and prevent national population overshoot as "parochial", "trivial", "selfish", "nativist", "xenophobic" or "racist" when open borders are a proven fertility stimulant to nations who treat North America, Australia and Western Europe as a safety valve for their burgeoning population and as a source of remittances. It is also supremely stupid to ignore the fact that migrants to North America---a major resource glutton----on average quadruple their GHG emissions upon arrival and similarly multiply their consumption to the cost of the whole world.

Noble intention: To worry about climate change.
Stupid action: To make climate change such a fixation that it hogs the stage so that more imminent catastrophes (overpopulation, Peak Oil, Peal Soil, water shortage, biodiversity collapse, atomic/chemical or biological war and terrorism) do not get the attention that they need. Systems collapse is consequence of all these disasters acting upon each other, but why nominate climate change as the only meaningful metric of overshoot when other unfolding disasters are poised to kill us first?

Noble intention: Foster women's rights.
Stupid action: Support only 'voluntary' family planning even though that alone won't get us to sustainability, and even though nothing is more coercive of women's rights than making women live in an overpopulated environment. That is, an environment of inadequate housing, inadequate water, inadequate food and nutrition, poor air quality, poor educational opportunities, and more violence. No Chinese Communist Party apparatchik could be as tough on procreative "rights" as the environment would be on us if there had been an extra 400 million Chinese people born because the Chinese government lacked the resolution to enforce a One-Child-Per-Family law. That's 1.8 billion metric tonnes of GHG emissions per year not added to the global atmosphere and billions of barrels of oil and tonnes of coal not consumed thanks to the OCPF law. Still wish that the Chinese government had not infringed on women's 'rights'? Would you prefer extinction to a curb on procreative rights? Species suicide is noble? And you call your position "ethical" while my prescriptions are "monstrous", "inhumane", "intrusive", "undemocratic" and "disrespectful of women's rights"?

Noble intention: To tell me how to write. To tell me to “tone it down a little”, not to be so “abrasive” or "caustic", to walk on egg shells and tip-toe around people’s sensibilities so that my message will be received by a wider readership.
Stupid action: To promote the idea there is a “one-size-fits-all” writing style that appeals to everyone. Wrong. It takes a variety of approaches to reach different people with the same message. One writing style may not be to your taste, but it may well be what grabs the attention of others. Instead of trying to drive one style off the stage, concentrate on getting the message out in a different way--- your way. There is room for all styles and approaches, and many are complementary. If you don’t like playing the “Bad Cop”, then by all means, be the “Good Cop”----but don’t pretend that we don’t need bad cops. There is a time and a season for being undiplomatic. Especially when the stakes are so high and danger so imminent.

The green left often advocate opening up the borders of Australia or Canada to the world's poor to relieve overpopulation. Australia is not an island! Population growth is inevitable and we just have to deal with! etc. They know full well that isn't going to happen. Australia and Canada promote immigration, and do allow in far too many to be blunt. But the truly poor are carefully excluded except in tiny numbers. Generally the only ones allowed in fairly wealthy, or skilled - those who would do more good in their home countries. Anyhow to make any meaningful difference, Australia and Canada would have to allow in tens of million of poor immigrants, immediately. Anything less is a meaningless token. The trendy leftists wouldn't like that one little bit. Cities turned into refugee camps. Their taxes raised through the roof to provide for the newcomers. Remaining wilderness destroyed to provide resources. And many of them losing their jobs, unable to compete. So the leftist "environmentalists" can advocate throwing open the borders, while at the same time safe in the knowledge their governments will never actually do it.