The Green Leap Of Faith 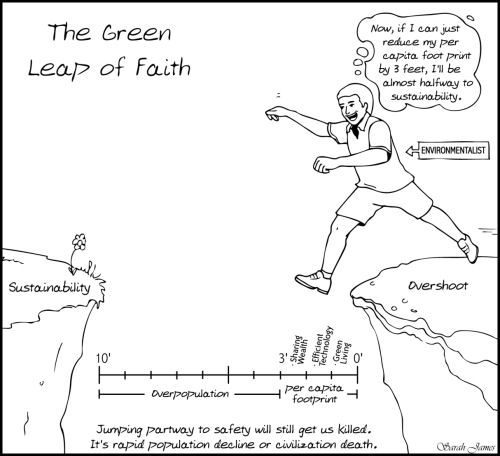 There are many problems such as climate change, famine, ethnic strife, women’s rights, inaccessible health care and education, which command more attention than the underlying forces which drive them. However, if those underlying forces are not addressed, then any solutions to those problems can only be seen as half-solutions, and any focus on them as distractions. If jumping half-way across a chasm doesn’t get you to the other side, it is better to abort the launch and plot another course.

It must be understood that in an economy such as ours, which is so heavily dependent on non-renewable resources, zero-sum game conditions apply, and the decisive factor in determining scarcity is the number of people who are making a claim on that diminishing supply. It is much like a teeter-totter. As the number of people goes up, the amount of resources per person goes down--- except for one thing. Even if the number of people remained the same, the per capita supply on of non-renewable natural resources would continue to diminish---a ‘negative’ sum game condition which would eventually undermine even the most equitable distribution of resources and erupt in lethal conflict. Clearly then, standing pat with a human population level that is already unsustainable is not a solution. Mere population stabilization will not get us to our desired destination. Not by a country mile. The reality is, the scale of overshoot is such that we may have passed several tipping points already, and the planet will not wait for us to conduct modest population reductions at the leisurely pace some would prescribe.

Living Smaller Is Not A Significant Offset To Overshoot

One answer---currently fashionable in affluent societies----is “green living” or living smaller. It is a message that has gained currency even in commercial circles. As Al Gore advised us in his documentary, “The Inconvenient Truth”, if we all resolved to reduce our personal impacts and made more responsible consumer choices, the sum total of our sacrifices would add up to a sustainable society.

Thus many of us, in the developed world, heeding this call for personal responsibility, resolved to conserve and recycle, change to more efficient light bulbs, and drive more fuel-efficient cars, to reduce our personal footprint. Little attention was given, unfortunately, to the number of “feet” that have erased the gains made by this behaviour. As Kate Galbraith reported in the New York Times, if a hypothetical American woman who switches to a more fuel-efficient car, drives less, recycles, installs more efficient light bulbs, replaces her refrigerator and windows with energy-saving models has two kids, “her carbon legacy would eventually rise to nearly 40 times what she had saved by those actions.” (“Having Children Brings High Carbon Impact”, August 7, 2009) She cited a study conducted by Paul Murtaugh and Michael Schlax of Oregon State University that was published in a peer-reviewed journal called “Global Environmental Change19 in 2009 (pp 14-20). Murtaugh, a statistics professor, and Schlax, an oceanic and atmospheric science professor, both at OSU, found that having children greatly swells the acreage of one’s footprint.

“Clearly, the potential savings from reduced reproduction are huge compared to the savings that can be achieved by changes in lifestyle. A woman who adopted the six non-reproductive changes in Table 3(as summarized by Galbraith above) would save about 486 tons of C02 emissions during her lifetime, but if she were to have two children, this would eventually add 40 times that amount of C02 (18,882 tons) to the earth’s atmosphere.” (p. 18)

In other words, not having a child dwarfs all other green “lifeway” shifts. They added that using the “constant” emissions scenario between more pessimistic and more optimistic projections of future C02 emissions,

“...an extra child born to a woman in the United States ultimately increases her carbon legacy by an amount (9,441 metric tons) that is nearly seven times the analogous quantity for a woman in China (1,384 tons), but because of China’s enormous population size, its total carbon emissions currently exceed those of the United States.”

While acknowledging that “lifestyle changes” are essential, they emphasize that they “must propagate through future generations to be effective and...enormous benefits can be gained by immediate changes in reproductive behaviour. They conclude that “ignoring the consequences of reproduction can lead to serious under-estimation of an individual’s long-term impact on the global environment.”

“P” is the decisive variable in IPAT

In the so-called “IPAT” equation, the foundational formula of the environmental movement, where “I” (environmental impact) equals “P” (the population level) times “A” (or per capita consumption) times “T” ( for technological inputs), the conventional wisdom is that the “P” factor carries equal weight with the “A” factor. The Murtaugh/Schlax study, however, demonstrates that “P”, our population level, is by far the decisive variable. Murtaugh even noted that their calculations are “relevant to other environmental impacts beside carbon emissions-for example, the consumption of fresh water, which many feel is already in short supply." The fact is, climate change is not the only metric of overshoot, nor necessarily the most urgent. Our crushing population level drives and magnifies every one of the multitude of synergistic disasters that are building into “the perfect storm”. This is the real “inconvenient truth” that the environmental establishment is wilfully ignorant of. More than that, some so-called environmentalists like the “Hartmannites” and the “Eco-socialists” have not only downplayed the role of population in environmental degradation but denied it. This is a sin of omission and denial of even greater scale than that of the climate sceptics they revile. And it is a sin that cannot be expiated simply by acts of self-righteous self-abnegation, frugality or “green living.”


“...we do not know if these ‘responsible’, ‘green’ behaviors, when combined with all our other behaviors, actually reduce our footprint.  3000 miles of airplane travel per seat consumes the petrol an efficient car consumes in 4 months. Take three or four family members on the plane and your family’s footprint is the same as if you drove an extra car.  Take three family trips a year and your family burns enough petrol to run four cars. If we do not increase the size of our homes or take more energy intensive vacations, and we take aggressive conservation measures, we can indeed reduce our personal footprint---by a few percent. However, if we eat a more healthful diet and exercise, and it extends our life by that same percentage – how then would we reduce our footprint at all? If we capped the consumption of all individuals; if each person in the world, accepted ‘middle American’ limits to his or her consumptive practices; if we limited the number of children so global population stopped growing; if we changed to a coal economy and sequestered all the carbon dioxide, total human footprint would still increase by a factor of four to allow the "have-nots’" consumption to catch up with that of middle class "haves".   We would empty our reservoirs, diminish our forests and fisheries, and poison and destroy our environment 4 times faster than we are today.”

It should become apparent that curbing personal consumption will not prevent rapidly expanding scarcity, dislocation and, conflict and an ensuing dark age. We must reduce the human population as quickly and radically as we can to preserve the human experiment by allowing human ingenuity the time it needs to buy the time we need to achieve a more graceful transition to our ultimate destination. To believe that we can jump across the chasm to a sustainable existence without rapid population decline is more than a leap of faith. It is suicidal.

I agree that socialist are missing the point, though may be fewer are advocating further population growth. The debate is also very polarized in France, for instance, with the official position of the degrowth movement regularly pretending to debunk population bomb and malthusian approaches. Their claim is that the main problem is conssumption and not population. There arguments on the question are rather shallow and they usually oppose an ethical stance that closes all debate. They usually cite the case of the african continent that, has a so low footprint per inhabitant that their overall footprint are negligeable- However they never mention the asian case, with a rapid switch of consumption pattern, fail to detail the notion of footprint and do not quantify the impact of emigration for work that induces a rapid change from rural to urban or western consumption patterns as migrants settle in high consumptons zones. Ideology is pervading the whole debates, from christian ideological remains to optimist good willthinking that is supposed to be more uniting. The truth all these people have a short memory and seem to forget that fighting high birth rates among the poorest had been a difficult fight led by progressist neo malthusian, a powerful popular leftits and anarchist movement in Spain and France, that confronted states and religious authorities and were sued for "pornography" and forbidden. The taboo surrounding this all issue is in fact a victory of the most conservative forces in the european politic arena that happened during the war and managed to impose family as a central value in post war politics with social aids encouraging large families, special privilges and a the famous mother day that was inaugurated by french collaboration and kept official until today. But on the other side, this fixation on the population issue seems as naive to me and fail to render the powerful mechanism that is behind the extension and reinforcement of modern globalized civilization. To say it briefly, it is incorrect to believe you can decorrelate conssumption and overpopulation, those two issues are linked historically. Our pattern of conssumption is fostering overpopulation by shattering traditional societies via forced trade, land expropriation and by disconnecting populaton from the necessity of local production. As a result they live in the same false paradigm as ours, of a wealth happening through technology and not directly connected to land production. This is why they can indulge in continuing to have large family, as the surplus migrate to towns and towns are connected to the international network via trade of commodities or service. Eventually these surplus fills the need for flexible cheap labour in western countries that is growing as growth is also occuring. Through our consumption we are pumping the surplus, and thus maintain it. This has always been like this, from the beginning of industry in europe, that fed on overpopulated european peasant communities, then sattelite non industrialized countries, than colonnies and finally the whole world. Reversely, as the density of people, the lack of space, the necessity to commute, the obligation to work for both man and woman and the increased time devoted to consumption of good and service in an industrial world, the "insider" population become less fertile, and only constant immigration can maintain the constant need of a cheap servile labour force. It is quite clear that most african cannot decrease their consumption. This is thus our task in the western world to focus on our consumption pattern, because this is what, on our side fuel the machine. If , here, we would go back to fields (probably after some violent confrontation to obtain this concrete option) like amishs, the whole globalized economy would collapse, migration would cancel out and local communities in fertile places would have to reduce birth rates because they would face the return of they migrants, both from regional urbanisation and remote western world ones. From our point of view it is more important to focus on a switch to simplicity and an active fight against globalized economy rather than advocating a rapid decrease of population in the west,because we are not any longer a significant source of the increase of consummers, though it is clear that many european countries (france, the netherlands, germany, england, italy) have a dangerously high density of population, that is by no way sustainable without oil.