What Being Radical Means Today

"(There is) a fatal bias of the publishing world toward optimism. It is a bias that is commercially rewarding because it panders to our cultural and neurological need for false hope. The problem is, while optimism may be a good coping strategy on a personal level, it could be a calamitous approach for humanity to take on a collective level. If the crises we face are as challenging as the science indicates, we need first to fully understand how challenging they really are, as opposed to what we are comfortable with acknowledging. In other words, we need realism, not optimism. Before there can be a ‘call to action’, we have to understand the scope and nature of the problem we want to solve." Tim Murray 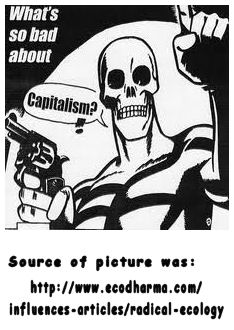 "To be truly radical is to make hope possible,
rather than despair convincing. "
Raymond Henry Williams

Is there any better summation of the environmental "justice" coalition than this? Need there be any further question about why "progressive" publishers like New Society Publishers and Clarity Press demand manuscripts that end with a happy ending---even if it contradicts the logic of the evidence presented by the author? Their mission is not to seek the truth, but offer hope that through activism "we" can "make a difference". This is the prevailing ethic in Sierra Disney World, the island of flakes, the community where I live.(Slogan, "Make a wish upon a star...."). The attitude here is, "If you can't offer a solution, then shut up". Every problem MUST have a solution. No wonder "Solutions" is such a popular website. To say that there is no solution, no "fix" for industrial civilization is tantamount to treason. I am letting the side down by undermining morale. I am the Tokyo Rose and Lord Haw Haw of Greendom, preaching defeatism. The possibility that the facts agree with me is irrelevant. It is The Cause which is important.

I would make the same point that Steve Kurtz made. "I do not believe that fantasizing is a solution except in one's mind. The hundreds of people I've encountered in 25 years of population-environment are not doing nothing if they debunk false hopes and strategies. They are also doing something if they soldier on with politically correct, but non-effective career paths: they are wasting time and energy and money. If there were no expanding problem, they might be out of a job."

The most disturbing possibility that emerges from the recent spate of doomsday books with absurdly happy endings is that authors may even be customizing their conclusions to fit the requirements of publishers rather than fit the reality of our predicament. A case in point would be Dale Pfeiffer’s article, “Eating Fossil Fuels, which formed the basis of a subsequent book of the same title published by New Society Publishers.

I make this point not to be critical of Pfeiffer---a brilliant mind who has written a great many outstanding essays in addition to the one referred to---but to illustrate what I think is the fatal bias of the publishing world toward optimism. It is a bias that is commercially rewarding because it panders to our cultural and neurological need for false hope. The problem is, while optimism may be a good coping strategy on a personal level, it could be a calamitous approach for humanity to take on a collective level. If the crises we face are as challenging as the science indicates, we need first to fully understand how challenging they really are, as opposed to what we are comfortable with acknowledging. In other words, we need realism, not optimism. Before there can be a ‘call to action’, we have to understand the scope and nature of the problem we want to solve. Or do mass demonstrations and Occupy protests address geological constraints? What set of demands can we present to Mother Nature that would persuade her to yield more low-hanging fruit?

What progressives don't get is that by definition, being 'radical' ---as opposed to being 'militant', 'committed', 'passionate' or 'progressive'----is to be determined to find the "root" cause of our predicament. If it is found there are no solutions to address the root cause, then anyone who shies away from this conclusion is not being 'radical', but being in denial. Attacking the symptoms and manifestations of the root cause because of an unwillingness or inability to address it can only be regarded as displacement behaviour, 'busy work' to assuage anxiety. But that essentially is what "environmentalism" today is all about. Polishing the wooden furniture while the house is burning down. Dashing around trying to put out brush fires while ignoring the major conflagration. "OK, maybe you can't save the world but you feel good about yourself". Anything to banish all the guilt we must feel for being white, privileged and greedy. Sin, guilt and expiation---it was the successful Christian formula for millennia, and so it makes sense that it should work for Christianity's heir apparent, the new secular religion of environmentalism.

Here's a newsflash for true believers and anyone else who works exclusively from their right brain:

Nature doesn't care about our emotional state, and objective reality is not a function of my "mood". Optimism and pessimism are not material to the issue of overshoot. "Morale" has no impact on EROIs. Just as religion has no place in a science class, the Human Potential Movement has no place in ecological analysis. The "you-can-do-anything-if-you-put-your-mind-to-it" philosophy has no relevance to our problem. Nevertheless, it seems that the environmental movement is being guided by the shibboleths of Wayne Dyer ("The Sky is the Limit") rather than the insights of William Catton.

One wonders how Dyer's "lifestyle coaching" could help people deal with the collapse or incineration of industrial civilization. I know, that mushroom cloud could be "perceived" differently. A mass die-off from starvation, disease and conflict doesn't have to be my reality if I can focus inward. Reality can be anything we perceive it to be. Ad nauseam. It is amazing that Self-Help gurus have made so much money for so many years preaching this bullshit. But then, look at Greenpeace and the Sierra Club or Nature Conservancy. There is big money to be had in promising false hope and salvation. The trick is to tell people (and corporate donors) what they would like to hear. Soothing lies.

Perhaps I do have at least one 'solution'. I have a scheme to generate money for a book publishing house that would print the unwelcome truth. I would set up a "progressive" publishing house to rival all others called "Dis-Connect Press" ("Connecting all the dots except the last one"), whereby steady-staters, volunteer family planning-only advocates, "Eco-socialists", Hartmannite feminists, and environmentalists could publish books that end on a note of idiot optimism ( “Yes there is a 14 foot gash on the starboard side, yes the pumps can't keep up with the incoming water, yes the ship will go down in two hours, BUT there is hope if we....”) . Since the market for false hope is insatiable, I would expect that sales would be brisk, and the money would roll in. With that money, "Reality Press" would be up and running......Its slogan? "Reality is socially unacceptable and the truth seldom politically correct".

I don't really agree that "it panders to our cultural and neurological need for false hope." I think it panders to a taught approach that comes from big business that was cultivated in NGOs by the corporate world from the late 1970s. NGO's got the idea that big business, government and grass roots environmentalists were all going to be friends and, furthermore, that NGO workers would become respected, salaried folk. They became open to lessons from their big brothers in the corporations and swallowed the idea that people will only read and think about something if you tell them everything will be alright. So my disagreement is with how this came about.

I see that the expanding human world that engulfs nature, destroys our fellow creatures and causes the decline of other life forms cannot keep expanding and in fact will come to an end. There is no "hope" of it continuing the path it is used to. To me, this coming end is the reprieve that the Earth's crust and the biosphere so sorely needs. I am optimistic that this will happen. I hope it is not too late for life other than human. I like the term "unwelcome truth" in your article, Tim. Might that not also be a nice name for a publishing house? It could be like the Puffin arm of Penguin.