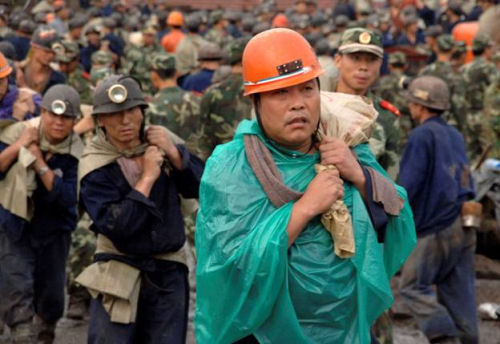 'Diversity' drives down wages in Canada

Government and industry tell us that we don’t have enough trained workers of our own. But maybe the real problem is that our workers are not trained to accept substandard wages for hard, dangerous work, that neither government nor industry has taken a serious inventory of our labour needs or resources, and that they are gripped by a quick-fix mentality that looks overseas rather than investing in the training of our own people, particularly of native youth.

And there is another elephant in the room. The primary question. Why the mad rush to “develop”, mine, drill and transport every resource in sight? Whose agenda are we following? The long term needs of Canadians, or the shareholders of foreign corporations and revenue-hungry debt-addicted governments? What becomes of the extra millions we import in a generation, when the ‘gold rush’ is over?

Nothing so permanent as a "temporary" worker

These miners are being brought in as “Temporary” Foreign Workers. A labour category whose numbers have tripled in just six years. But as the saying goes, there is nothing so permanent in Canada as a “Temporary Foreign Worker”. The trade union establishment, in fact, wants to smooth their transition into formal immigrant status. This reflects the ambition to “bring them into the union”, rather than to protect Canadian workers by demanding their expulsion. One often gets the impression that unions care more growing their dues-paying membership base and about exploited temporary workers than about the jobs of Canadians that those workers have displaced. Whatever happened to the ancient understanding that the best friend of the working man (or woman) is a tight labour market?

Until recently, it was the cross-party consensus that Canada should have a ‘tap on, tap off’ immigration policy. That is, Canada would open the gates wider when times were good and foreign workers were needed, but close them when times were tough, as they are now. That consensus was blown apart two decades ago when the Mulroney government dramatically jacked up immigration quotas to unprecedented levels, motivated not by economic considerations but by political ones. Namely, the desire of the Conservative government to woo ethnic voters away from the Liberal Party by expanding immigration. Since then, successive governments have kept up that unwarranted intake for fear of chasing ethnic voters away into the embrace of the opposition parties eager to capture their loyalty.

The aim of public policy should not be to get rich quick, but secure economic stability over the long haul. The word “sustainable” has been abused beyond meaning. But nonetheless, it applies here. It should be clear that a sustainable economy is better than one that rises like rocket, and then crashes. A sustainable economy for a sustainable population level.