The new science of ecology will now describe animals as they really are---moral agents, not biological automatons. And as such, they are to be charged with a moral responsibility to constrain their cravings and live simply so that other animals like them can simply live. Or as they now say on St. Monbiot Island, “Be the reindeer you want the world to be.”

Island in the Behring Sea Renamed To Reflect New Paradigm 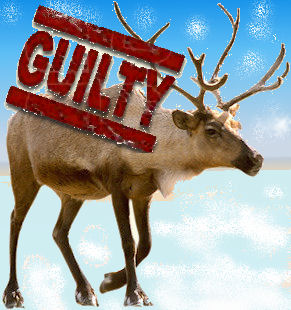 Guilty as charged:
Fat, Greedy and White---guilty ungulate “Rudy” reacts to news that responsibility for the infamous St. Matthew Island Reindeer die-off is now attributed to his appetite, rather than to excessive reindeer numbers. Had he eaten lichen modestly, a scientific report says, other reindeer could have lived and the island’s bio-capacity would not have been exceeded. According to data released by the GHN (Global Hoofprint Network) in San Francisco, if all reindeer consumed as much as Rudy did, four planets would have been needed to supply the species sustainably.

A 137 square mile island in the Behring Sea made famous by the spectacular increase of an introduced reindeer population of 24 in 194 which became 6,000 in number in just two decades ---only to suddenly collapse in a matter of months by 99% until only 42 were left in 1966---was renamed recently in a ceremony to mark the occasion. http://www.stuartmcmillen.com/comics_en/st-matthew-island

What was once known as “St. Matthew Island”, the remote and desolate island is now to be called “St. Monbiot Island National Park”, in honour of renowned environmentalist writer George Monbiot and his trademark “Monbiot Mantra”--which goes something like this: “Overpopulation has little to do with it--it is our appetite, not our numbers. Especially the gluttony of old middle class white guys looking for a scapegoat to deflect attention from their culpability.”

The decision to rename the island came in the wake of a report commissioned by the Sierra Club—and paid for by billionaire David Gelbaum and several of their big corporate donors like natural gas fracker Cheasepeake Energy---that while greedy reindeer of the Northern Hemisphere make up only 5% of the global ungulate population, they account for fully 25% of the total amount of lichen consumed in a given year. Constant repetition of that statistic is now mandatory for every college student who hopes to graduate with a degree in Environmental Studies, Political Science or Communications. Education ministries across the continent have now determined that rote memorization of clichés like these is more cost-efficient than actually teaching young people four years worth of real science.

In other words, the name change was thought necessary to fit the new paradigm, and signalled a watershed moment in the evolution of environmental thinking. Gone is the hopelessly unfashionable and politically incorrect foundational formula of the environmental movement, which assigned critical importance to the population level of a given species when gauging its ecological impact.

Henceforth, no researcher or environmental commentator will dare to say that any species will grow its numbers to meet the available food supply (the Hopfenberg Hypothesis). Instead, cultural conditioning ---typically in the form of mass advertising and the promotion of a competitive “keep up with the Joneses” mentality---will be regarded as the key driver of environmental degradation and the demise of all species. The new science of ecology will now describe animals as they really are---moral agents, not biological automatons. And as such, they are to be charged with a moral responsibility to constrain their cravings and live simply so that other animals like them can simply live. Or as they now say on St. Monbiot Island,


“Be the reindeer you want the world to be.”


“With this announcement, it is to be hoped that the scourge of sociobiology will never again raise its ugly head. Now that it has been laid to rest, biology itself must now finally be exposed for what it is---a fascist concept.”

“It is not how many reindeer there are,” she continued, “but how they choose to live. The reindeer on St. Matthew Island could have lived like Ghandi, but instead they chose to live like Gates.”

Ms. May recommended that the environmental movement continue to follow its true mission---the inculcation of guilt for bad behaviour, and the pursuit of “good feelings” among its adherents by making trivial lifestyle changes rather than measuring their success by the achievement of meaningful concrete results.

“Self-righteous self-abnegation and the worship of green pie-in-the-sky technologies is the New Christianity,”

she exclaimed with buoyant pride. Making an obvious pitch to the social media generation, May continued,


“ You can continue to be a dope-smoking, lying adulterer and fornicating flake and be blessed, so long as you go vegan and give up your car.”

Citing the United Church of Canada as her model,


“The Church of Green is inclusive and diverse,”

Ms. May concluded. Moreover, it has been speculated that in keeping pace with evolving standards in the United Church, in the new ‘progressive’ Green Party even unqualified reindeer will not only be welcomed but ordained. (It is not as if the Green Party has set its leadership bar too high, is it?)

The impact of the name-change has already been felt across all North American campuses and Biology Departments, which are now faced with an imminent overhaul. In an arguably futile attempt to save the discipline, Biology Department heads all over North America are now calling their field the “The Sociology of Flora and Fauna” , and in some cases, “The Moral Philosophy of Natural Selection”. Eventually, however, it is expected that biology courses will soon fall under the rubric of “How- Zionism-Caused-the-Sixth Extinction-Event”. Such is the chill that has descended upon academic discourse in the wake of this announcement that when one professor was heard to remark that the fate of St. Matthew’s reindeer might have been related to their unchecked fecundity, his college was quickly censured by the Canadian Association of University Teachers (CAUT) following a complaint from a professor at the Women’s Studies department at Hampshire College. In her words,


“No one should be able to tell female reindeer what to do with their bodies.”

So it is all now official. There is enough lichen in the world to go around, if only it is shared equally and consumed responsibly. Breed on. 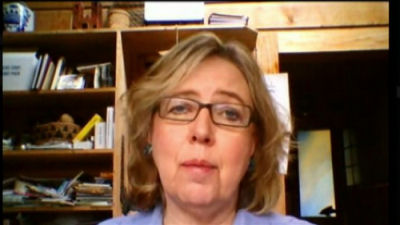 Now I don’t claim to be an A student baby or an authentic Green Party Leader either, and I ….

But I do know that I love you,
and I know that if you love me, too,
what a wonderful sustainable world this would be.

PS Readers will understand that the quotes cited in the foregoing parody are fictional and made only to highlight the absurdity of predominate green ideology. They are the responsiblity of the author alone. Tim Murray

It really does come down to going easy on the lichen...

Consumption/Population both bad, but Consumption not as bad

Humans, like any other animal, only really think in the short term. Given resources, we will spend them as fast as reasonably possible. But unlike many other animals it seems we have two ways of spending them:

The green left say (1) is good, (2) is evil. Of course both are bad and unsustainable. But I disagree with the green left and think that if we're going to recklessly spend resources, consumption is better. Cause when the resources run out its a lot easier to reduce consumption than it is to reduce population.....

It really does come down to going easy on the lichen...

From reports of hungry reindeer shortly before that last disastrous winter the reindeer really did cut back their individual consumption, significantly. Collectively though, their consumption was unsustainable as they were grossly overpopulated. The green left would do well to appreciate this lesson.