Interesting. According to a recent Statscan report, people in Vancouver and Toronto are less happy than folks in any other Canadian city. How can that be?

The unfortunate truth is that while many Vancouver and Toronto residents are unhappy, they can't tell you exactly why. Yes, they don't like unaffordable housing, traffic congestion etc. But apparently they can’t connect it to the federal policy of mass immigration. And anyone who tries to connect the dots for them is buried by media outrage and driven off the stage. Just ask Ontario's former Environment Commissioner, Gordon Miller.

Meanwhile, after reporting Statscan’s findings, the CBC featured a story about a Harvard academic whose research has demonstrated that with enough effort, we can all “choose” to be happy. All it takes is practice. We can train our brains to be optimistic and positive. Translation: don't try to change your circumstances, change your attitude! If you work in a sweatshop or a fast food restaurant or at Walmart for the minimum wage, don't worry---be happy. Be happy with mass immigration. Be happy with your displacement. Be happy with 'diversity'. Be happy with Euro-Canadian cultural suicide. Don’t worry.

You see, it is all about how you look at it. Instead of being unhappy about the surrender and betrayal of your country or how your community and your neighbourhood has been rendered unrecognizable thanks to policies that were enacted by governments that never had a mandate to do so, you can focus on the positive. As Bing Crosby said, you've got to accentuate the positive, eliminate the negative, latch on to the affirmative and don’t mess with Mister-in-Between!
Each day you should endeavour to count your blessings, meditate and be kind to strangers and friends. If you keep doing that, one day you will suddenly wake up and realize that you are happy.

So give it a try, won't you? Say, "Despite the fact that Chinese millionaires have demolished heritage homes on the West side of town, inflated local real estate beyond the reach of ordinary Canadians and replaced English signs with Chinese-only signs, I'm happy!" Or, "Despite the fact massive numbers of Muslim immigrants are unwilling to accept our cultural norms or respect our traditions and impose a net fiscal burden on Canadian taxpayers, I'm happy! Then meditate and think about it.

Voila! Suddenly you understand what Vancouver City Council and Mayor Gregor Robertson meant by “Reconciliation”. You are happily reconciled to your own displacement! You are born again! You are at one with the Multicultural universe! You are “welcoming”. You are ready to run to the airport and like a Walmart greeter shout, “Welcome to Canada, Home-to-the-World!” Or, “Welcome to Vancouver, The World-in-a-City”!

You are ready to be kind to strangers, strangers like the ones who came from China to rip down good housing stock, price you out of the local market, and drive your wages down as not-so-temporary foreign workers. Or ready to be kind to vitriolic imams who preach anti-Western hate from the safety of their mosques while their agents and front men wage law-fare against critics or threaten them with a human rights complaint. It is amazing what a little kindness will do.

If people in Vancouver and Toronto are so unhappy, then why don't they take that advice? Decide to be happy. Decide to change their attitude. As that Harvard academic said, the world is what you perceive it to be. Change your perception and you change the world. Your world.

So tomorrow morning, I am going to do just that. I am going to perceive the world differently . And I am going to start by perceiving my VISA bill and my mortgage debt as being paid off. Poof! Gone! See!

I wonder if the Royal Bank will accept my perception of reality?

And now a word from our Minister of Immigration, Chris Alexander (with apologies to Bob Marley): 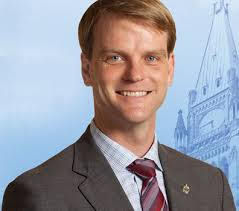 Here I give you my phone number. When you worry call me. I make you happy—or I’ll call the police and shut down my constituency office until you go away!