David Packham, former bushfire CSIRO scientist, is urging more 'fuel reduction' burns to our precious bushland. But more and more people are noticing that wildlife are not 'bouncing back' after the constant burning in Victoria. The yearly target of burning five per cent of public land, purportedly to reduce bushfire risk in Victoria (after the 2009 bushfires), means that within 20 years or even less, there will be no viable bushland left in this state on public land if people allow this to happen. Forests and their inhabitants just do not recover from this kind of assault, despite common propaganda that this is 'normal' for Australia. Kooris have since denied that this was their practice. People need to ask themselves, 'Who benefits?" when they hear calls for even more burning. The forestry industry benefits by replanting rows of straight pines which provide little habitat for animals and are in fact very flammable. The property development industry also benefits when bushland is razed by fire.

After the devastation of the 2009 Black Saturday bushfires, the Victorian Bushfire Royal Commission set a yearly target to burn five per cent of public land to reduce bushfire risk across the state.

According to former CSIRO bushfire scientist, David Packham, forest fuel levels have worsened over the past 30 years because of “misguided green ideology”, vested interests, political failure and mismanagement, creating a massive bushfire threat.

He is arguing that unless the annual fuel reduction burning target, currently at a minimum of 5 per cent of public land, “is doubled or preferably tripled, a massive bushfire disaster will occur”!

Rather than Victoria’s “failed forest management” being a threat, our State’s excessive and draconian response of 5% to be burnt each year is itself a threat to forest environments. We must live with Nature, not destroy it with draconian “management”.

This expert is failing to see the forests for the trees, and seems to think that the wholesale destruction of forests, with more burning, will “save” them – in a maligned effort to protect human lives and assets?

State agencies will choose the easiest route of randomly burning sensitive environments, to fill quotas, and in the process kill off flora, fauna and habitat features as mere collateral damage!

They concede that to some extent the old adage ‘fight fire with fire’ applies. Used well, fire is an effective, economical tool for land managers.

Reintroduction of occasional fire into some landscapes, and return to a finer mosaic of burning, will not prevent wildfires; it may, however, reduce their impact, by maintaining fire-dependent habitat and

protecting fire-sensitive birds. Kakadu National Park, subjected to decades of management burning, has all but lost its fauna from too frequent fire, which is likely the cause of the loss of the hollow dependent Gouldian Finch from vast areas of its frequently burned former range. 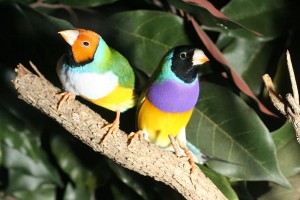 The original forests of Gippsland were not flammable, settlers of Fish Creek were not able to burn the forest to clear land until the railway line was cut through, bringing in a ‘draft’. This is a common story Australia wide in formerly wet forested areas.

Climate change is also said to be playing a role, with the biennial Bureau of Meteorology and CSIRO State of the Climate Report 2014 finding that rising greenhouse gas emissions are causing fire seasons to lengthen and are contributing to an increase in the number of fire risk days, particularly in the south-east of Australia.

Bill Gammage is an Adjunct Professor at the Humanities Research Centre, studying Aboriginal land management at the time of contact. He has convinced quite a few environmentally concerned people through his book ‘The Biggest Estate on Earth’ that regular burning is needed. It contains many fundamental flaws and represents ‘blind advocacy’ for repeated burning’ because ‘Aboriginal people did it’. Mooney et. al. examined over 200 sediment cores of 70,000 years or more of age to determine fire frequency. They found that fire frequency increased 50 fold with the arrival of Europeans.

However, more fires to fight fire is like using a sledge hammer to drive in a tack, or killing fleas on a dog with a shotgun!

Joel Wright, a Gunditjmara Linguist, has found no evidence of landscape burning in the Victorian western district but outlined the use of fire for smoke signals, and as an effective weapon against settlers. Research shows that fires have increased 50 fold since European settlement, so “fuel reduction” to make the bush less flammable seems to be having the opposite effect.

The Andrews government will review the minimum 5 per cent burning target in response to a Inspector-General’s report. Five years ago, both major parties backed the “minimum of 5 per cent” target, a key recommendation of the Victorian Bushfires Royal Commission held after Black Saturday.

Fire management needs to be multidisciplinary, and not simply about human welfare, stock and property assets. The timing of the burns should also take heed of breeding times and seasons for the species present, particularly those that are already rare or threatened due to the loss of habitat, food or human encroachment. We need to work out how we carry out our works without disturbing the nesting, roosting and breeding times for those animals in that immediate areas near human settlements.

Fire management needs to be optimised and based on where the greatest risks are, not on the metrics of hectares or percentages of Victoria’s landscape.

Dangerous burning could be dangerous for the public

Hectare, or percentage targets of public land to be burnt for fuel reduction, could give residents, and property owners, a false sense of security that they are "safe", and leave them vulnerable because the prescribed burning program is not optimized, or correctly targeted. With targets, such as 5% per year, Victorian state agencies will choose the easiest route of burning sensitive environments, to fill quotas, tick boxes, and in the process kill off flora, fauna and habitat features that many species rely on for survival. Former CSIRO bushfire scientist David Packham said that fuel-reduction burns should be doubled or even tripled to reduce high levels of forest fuel across the state! We may as well clear the whole State, and just pave it with concrete! This draconian approach might leave our State "safe", and in cinders, but at what cost? Human lives and assets are not the only consideration. There are native flora species that might tolerate flames and regenerate, but wildlife will die, and more species will be endangered. Simply burn, burn and burn is an admission that our economy and human activities has made our land vulnerable and inflamable. Land clearing, logging, destruction of invertibrates, urban sprawl is causing a drying out of land, and thus the cycle of more and more dangers from fires. Certainly our indignous fore-bearers would have already destroyed our land long before if this is the only way to control fires and keep humans safe? The burning for fuel reduction should be optimized and fine-tuned to be effective. The timing of the burns should also take heed of breeding times and seasons for the species present, particularly those that are already rare or threatened.