Melbourne's environment is steadily deteriorating as rapid population growth continues but some are insulated by wealth against the effects of this.Article first published January 1, 2012 but republished after site damage on January 6, 2012. I had over 100 reads when it was lost. 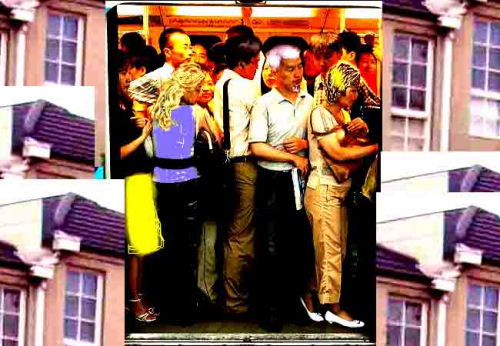 In city and suburbs trees fall victim to greed,

Backyards are demolished for a so called need

Of people awaiting all our precious spaces

And we give them up and then turn on the *races.

Our surroundings decline as we stand by and watch

“If you move to there these ones can move in

Then cover your garden, it’s no longer a sin.”

We think ourselves rich but sometimes we wonder

When our Bay is “un-swimmable” after rain, hail and thunder,

Was it like this when we were all kids?

The Melbourne environment is now on the skids!

But to our weekenders, some of us go

To beaches and sun or to ski in the snow

It still seems to the lucky ones everything’s dandy,

While for the rest of the people there’s little that’s handy.

“Have you heard of Peak Oil ?” I hear someone say,

“There’s plenty of growth still there in the system,

On domains that take in the populous places

I care not about problems that everyone faces

When too many people chase scarce flats and houses

I’m content with my mansion and grey suit and trousers.”

*"races" broadcast horse racing in Australia a favorite diversion from anything serious.

*"Bay"-Port Phillip Bay, the shallow lake like sea that get's filled with ordure, a danger to health when it rains heavily.

Proles leave Melbourne now. Southern Shanghai is only going to get larger, higher and take on more of a persona of its namesake. Notice the Ministry of Truth has already demonised our cultural aspirations for the quarter acre block Tigerquoll Suggan Buggan Snowy River Region Victoria 3885 Australia Ed. This comment reposted by Candobetter.ed on 6 Jan after original destroyed in site damage on 1 January 2012.

On January 2nd, 2012 nimby (not verified) says: Modern humans have been on our planet for about 200,000 years. Our indigenous peoples lived here for about 40,000 years, in harmony with the environment. In a 220 years since European colonization, the landscape of Australia has changed and declined considerably. Our cities are sprawling and causing a cancerous spread of concrete and heavy scarring along the east and west coasts, fertile lands being transformed into sterile wastelands of housing, roads, and a atrophy of dead land and waste. Obviously "sustainable growth" is an oxymoron, and it is also obvious that we cannot continue for 40,000 years, and certainly never 200,000, with a self-destructive economy that feeds on perpetual population growth. Nature and human infrastructure will implode eventually under your own weight, and the toxic waste we are producing. We must have a DNA that will end our time on this planet. Ed. This comment, originally posted on January 2, was lost through site destruction but reposted by the editor on 6 January 2012.

On January 3rd, 2012 Mary (not verified) says: Public transport fees, childcare, education, electricity and water costs are all increasing. Houses are unaffordable, and renters and mortgage holders are saddled with big burdens. The growth paradigm is unsustainable in the long term. Population growth is increasingly destroying economies of scale, and the carbon tax will add a further blow-out for families. Growth is unsustainable, and economists refuse to acknowledge the finiteness of our planet and natural resources. Developers and big businesses continue to profit, but the costs are passed, undemocratically, onto those who can least afford it. Victoria is sinking in debt, and thus our leaders speed up growth in an effort to pay for it! It's a downward cycle of costs, congestion, and an unrealistic economic formula towards environmental and economic doom. Reposted Jan 6th 2012 because original lost in site damage. - Ed.