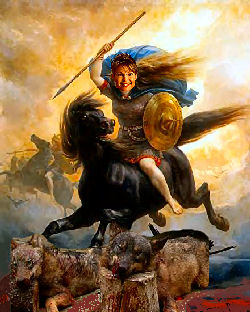 Those Australians uncorrupted by the ubiquitous US media, are gobsmacked by the utter tastelessness that passes as attractive in US presidential candidates. Sarah Palin, the latest republican candidate for USA Vice President, epitomises this trend.

Championing selected human rights, apparently prepared to sacrifice her own daughter to a public shot-gun marriage, she seems like a high-tech cartoon of a religious reactionary. It is chilling to realise that the violent religious right are among the few which the press and corporations want to motivate to vote in the US client state. The rest of the American voters are largely kept very bored with the notion of exerting some say in their own fates.

Not just tasteless; malice and stupidity caught on film: 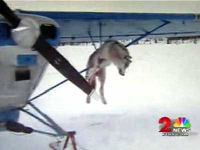 I was bemused, impotent - until I saw this film. Then I realised how bad Sarah Palin must be, how bad the US situation must be - politically and for wild as well as domesticated species - tortured and harassed the way they were in Roman circuses and for the same political ends.

This three minute video about Sarah Palin's appallingly cruel record on wildlife also tells us about the beautiful Alaskan wilderness.

The world is watching Sarah Palin.
Please don't give into apathy here, because the high profile of this ignorant woman, gives those of us with an ounce of decency, an opportunity at world-wide level, to show the US Republicans that shooting animals whose habitat is already beseiged by US overpopulation and economic greed - for sport - goes way beyond the bounds of decency.

The situation and the values appear to be quite depraved. The bible bashing that accompanies this grand-scale human bullying is nauseating and frightening. How widespread is this emotionally blunted contempt for nature and blindness to beauty or compassion in the mainstream religions?

Time now for religious leaders to rise up and condemn and ostracise this woman and the entire party which endorses her, or forever be condemned by their already long record of silence on such things. 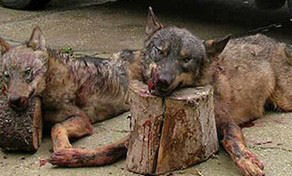 On top of her apparent absence of normal compassion, this woman who according to my values is insane, actually models the brutal execution of wildlife using technologically intensive weaponry from petroleum-guzzling small airplanes. This is frightening ignorance of here and now petroleum costs and scarcity in a world where the US has actually gone to war for more petroleum. This is oil-profligacy in a political context where even her own party is advocating reducing foreign oil dependency. For every drop of oil, how many drops of human and other blood and sap in our turbo-vandalised natural world?

Is Right to Life a political mechanism to draw energy from reasonable people?

It makes you wonder if Right to Life is just an impossibly confusing, diabolically effective smokescreen to cover up total immorality, utter selfishness, blind, driving ambition, compulsive wastefulness and money-worship in the US political Right. Are the religious right of the Republicans its moral orcs?

And, for those of us who spend nearly all our lives fighting against the needless, heart-breaking suffering which proceeds at an industrial rate, how appalling is the information that big money backs this suffering and keeps it accelerating and amplifying. If that money were to be taken from Sarah Palin and the Republican Party which has endorsed such unspeakable acts, how much kinder, overnight, the world would become.

I hope that someone will write an article about those organisations which have funded Palin and the Republicans so that we on candobetter can name their CEOs and associate them with these deeds.

Sarah Palin is actually the Governor of Alaska. For more about this woman and for a very interesting comparison of economic benefits of passive wildlife observation vs violent rampaging and Palin's lack of interest in the first, have a look at this Alaskan website, Grizzly Bay Org. According to Grizzlybayorg, her parents guided her values in this. 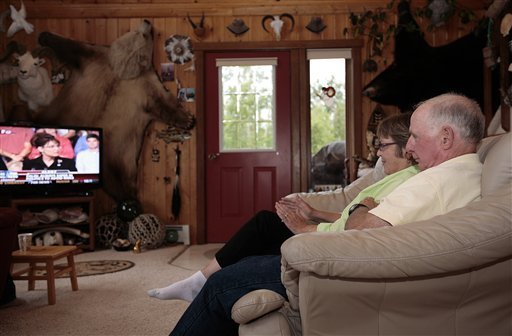 Roger Schlickeisen, of Defenders of Wildlife Action Fund, writes that acceptance by Sarah Palin of the Republican nomination for Vice President puts her second in line to be President of the United States. He says that he needs help "... to let America know where she stands on the brutal and needless aerial hunting of wolves and bears. He asks that people "Watch our new video on Palin’s awful record and share it with everyone you know who cares about wildlife." He warns that the "video is extremely disturbing. It contains graphic images of aerial hunting of wolves," and he adds that this is "a brutal and needless practice that Governor Palin has fought hard to promote and expand."

Schlickeisen states that, "Despite strong scientific, ethical and public opposition to aerial hunting, Governor Palin has:

* Proposed paying a $150 bounty for the left foreleg of each dead wolf.
* Approved a $400,000 state-funded propaganda campaign to promote aerial hunting.
* Introduced legislation to make it even easier to use aircraft to hunt wolves and bears."

He asks, and I reiterate, "If you care about wildlife, please watch this video right now -- and then share it with every friend, neighbor, conservationist and wildlife lover you know."

"Please also share our video on blogs, social networks and elsewhere. I’ve pasted the link to the video below to help you spread the word: http://actionfund.defenders.org/palinvideo "

Defenders of Wildlife Action Fund can be contacted at:
1130 17th Street, NW
Washington, DC 20036
or at www.defendersactionfund.org

See also:
Alaska Governor Sarah Palin Wins 2008 Rubber Dodo Award in biologicaldiversity.org of 17 Sep 08, Sarah Palin's record on environment is abysmal in seattlepi.nwsource.com of 5 Sep 08 by Rick Steiner and readers' comments,
New Orleans: The City That Won't Be Ignored in The Nation of 3 Sep 08 by Naomi Klein. How Democrat Barack Obama has incredibly surrendered critical ground to McCain in New Orleans, in which the the Rebublican Bush administration scandalously mismanaged the relief effort following Hurricane Katrina in 2005.

Well, counting the health record of Mr McCain, what if he just popped off sooner rather than later ? The prospect of this deranged woman ascending the most prestigious office of the USA and the leader of the so-called free world- scares me. ALL her records point to ALL what is wrong in morality, not just the turpitude of her behaviour towards wildlife. She brings back civilisation to most primitive era and all our efforts to build a better society will be trampled under her foot. If I say "our" is because Carlo Fuentes, the mexican author, said that the American elections have a significance which goes beyond the interests of the USA, and that everybody should be allowed to vote for the American president. It sounds like a good joke, but I wish we could, because the foreign policy of the USA has a ripercussion on world affairs which could be positive or dangerous. How to oppose the triumph of the GOP should be ... an international duty . I shall, on my part, send the article to my American friends, pity that they wouldn't dream of voting Repubblican! Marisa

Palin's cruelty to animals even against Book of Genesis

Sarah Palin is a shameful example of Christianity! How can she believe in a compassionate God and oppose abortion, yet at the same time endorse gross cruelty to His Creation - animals and environment? She should read Genesis where is states that God made the planet and that we humans are custodians and should not kill! The original humans, Adam and Eve, even if mythical, were vegans and were prohibited from shedding blood. Eating some animals was only a concession to Sin, and limited food sources. There was never a license to plunder and destroy the planet and kill native animals. The days of "go forth and multiply" are well and truly over! Sarah Palin is an anachronism and she should go home and read her Bible, and maybe pray for insight!