Professional growth spruiker, Bernard Salt of KPMG, says that 80% of Australia does not want population growth. ("Straightening out Bananas", Property Council Congress, 2011) So how come we are being swamped? 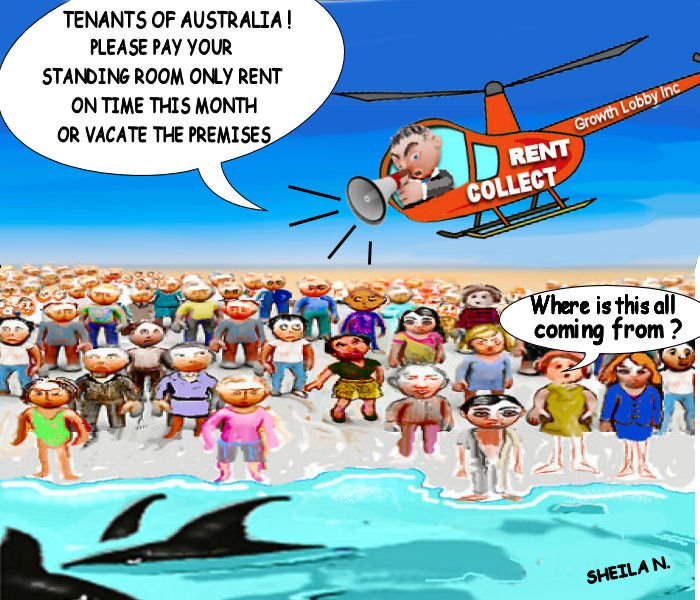 There is a theory to explain how unpopular and costly policies survive in a 'democracy' when the benefits are focused among a few people who can organise to protect those benefits, whereas the costs are diffused among many people thus difficult to recognise and organise against. This theory explains why 80 % of Australia does not want population growth for good reasons like the cost of housing and the wrecking of the environment, but we still have it because the Growth Lobby makes billions of dollars (not just millions) out of it. (See Chapter 5 of Sheila Newman, The Growth Lobby and its Absence.)

The cartoon illustrates this, as an organised and wealthy rent-collecting Growth Lobby Inc. swoops with a helicopter, while people look around them, confused about what’s happening.

The most recent figures from the Bureau of Statistics confirm the economy has grown at an average annual rate of only 2.5 per cent over the past two financial years. At the same time, with population growth at nearly 2% per year, it means that our population has grown nearly 4% in 2 years, faster than the economy! No wonder we have increasing poverty and unemployment. We are in population overshoot! The more of us there are, the more thinly our wealth is spread between more people SMH: Ross Gittins- RBA wants all on board in a waiting game Some have noted the impending loss of jobs in car making and elsewhere, and are wondering where the new jobs will come from? With an economy increasingly based on housing and population growth, where will the jobs come from? We are in population overshoot of jobs, yet our government is aiming at more "growth"! Gittins says "some people imagine the economy grows only to the extent the government is doing things to push it along. It ain't true. What propels the economy, keeping the number of jobs increasing virtually every year, is the material aspirations of business people and households". We can't keep accumulating material possessions, and there's limited natural resources, and compounding wastage and pollution. Australia is really in the midst of a recession. Why? Because per capital GDP is shrinking relative to population growth. Per person income and wealth on average is shrinking. Collectively the Australian people have squandered their wealth into property. Property is static, and doesn't produce long term jobs. It was quite predictable that the mining boom would come to an end and we have nothing else to replace it. With unaffordable tertiary education, and cut-backs in funding for science and research, it means that our jobs are more likely to be in customer service industries, not those with highly specialized skills. We can only wonder how many of our "skilled migrants" are actually working in their skilled area - or in customer service? Our real estate sales to foreigners aligned with other real estate initiatives like land banking and drip-feeding housing growth and high rates of immigration all pushes up house prices and is considered as GDP growth. This alone accounts for more loss of productivity when you compare the amount of money needed for housing in Australia and wage levels needed just to keep up. Official figures released in May this year show Australians owe $1.8 trillion to banks and other lenders. But while the household debt is growing at a slower pace, it is still growing, and over the past 25 years it's been growing at twice the pace of house prices. Dwelling investment now accounts for 10.7% of our GDP, and such a healthy proportion means inflating the housing bubble, and exploiting household budgets, to their full-blown extent.

The Housing Bubble We Have To Have

Neoliberal governments at all levels of all persuasions have been, and still are, banking on the housing industry to keep their heads above water. As the Australian recession tightens its grip on these same governments, they espouse more of the same. Reliance on the mining and housing industries is like flogging a dead horse in the Melbourne Cup, it's not getting us anywhere let alone making us a dollar.

These governments are bereft of any idea how to stimulate the economy which is being strangled by high net migration, employment opportunities and a fractured taxation system. Governments are bullied by big business who are marching to a beat of a different drum to 99% of Australian citizens. The revolving door between big business and government has rendered government ie the major parties Labor and the Coalition, craven to an extent where government does the bidding of big business.

The demise of the manufacturing industry, while not the be all and end all of industries, was skills based, unlike the service industry which is supposed to replace it. Further to this the lack of investment in the education, health, agricultural, renewable energy, to name a few industries, has produced a future outlook that is very grim indeed. With youth unemployment running at up to 25%, the jobs market is extremely bleak for even our best qualified youth. Competition between these kids and allegedly skilled migrants is skyrocketing with all too often the migrants winning out because they are prepared to work for less cash and in poorer conditions.

Less cash in the market place only adds to our woes. Whether it be migrants earning less or a former tradesperson earning less as a cleaner, less lass cash means less sales. This in itself is not a problem, but it adds to the cycle of workers being laid off. This is the classic neoliberal conundrum and the very reason why neoliberalism will never work!

Those who control the strings will make a killing while those below, the majority, will struggle and some will not survive. This cold harsh reality of our governments' decision making. We get told after the event of what is going to happen a la East West Link and the Desal Plant. You've got it, it's going to cost you a packet, does it work? - who cares!!!

November 29 is polling day, I beg readers to keep the above in mind when voting. A vote for either of the major parties is for more of the same. More bad decisions, a housing market that's set to explode, less jobs, more misery and more people on the dole!!!

Thank you, Waiona, for this insightful contribution. Please consider also having having a look at
Issues that should be decided at the 29 November Victorian State elections (14/11/14, also at candobetter.net/MakeYourVoteCount) and give us your thoughts. - Ed

There have been people saying a housing crash is imminent, for years. I didn't think it would have taken so long, but I underestimated the mania and stupidity of those caught up in the hype. The old adage that one never loses underestimating the intelligence of people rings true. But now you mention that we are relying on housing price growth to fund consumption, when all indicators point to growth in price slowing and stopping. Ooops. I've read these two statements in the media, haven't seen a journalist plucky enough to mention them together and add these proverbial "2s" together. BUT now, the RBA, the Banks, and even now Saul Eslake are referring to a peak, or a bubble. This is different. They are bearish on the housing market, where they weren't before. A warning sign. As I mentioned in my last article, it will be the Aussie amateur property investors who'll be the last to realise there is a problem. Waioona, you are right they we should avoid the major parties. I vote to upset the balance of power and for hung parliaments and power to independents. There are a few in my electorate, which is good news.

Australia First Party Vote 1 JOHN CARBONARI For Bayswater RESTORING QUALITY OF LIFE TO AUSTRALIANS The Lib/Lab/Greens offer: Relentless increasing of Municipal Rates to fund non ratepayer services/Corporatised Councils. Gas and other Utility Bills through the roof, and forecast to skyrocket for foreign utility owners. Neighbourhoods of family homes being destroyed for increased density to cater for immigrant plague. Jobs sent overseas, and swarms of foreign 457 visa scabs throwing Aussie workers onto the scrapheap. Youth adrift/purposeless through Aussie culture relegated under the pox of multicultism. The scourge of drugs and violent crime rampant, undermining families and a civil society. Aussies priced out of housing market by Chinese buyer access/demands. Never ending revenue raising “fines”, stressing family budgets to pay for politicians squanderings POLICIES TO PUT AUSSIES FIRST: Returning power to electors via Delegated Democracy, Citizens Initiated Referenda and Parliamentary Recall. Reclaiming/Nationalising utility enterprises, to return to affordable pricing. Public ownership to retain local oil refining as an essential strategic industry. Redress for Lib/Labs unconstitutional sale of Public Assets. Usurping by State Government of Federal property rate tax levy to be rescinded, and replaced by fees limited for needed services of local Councils. Government purchasing from local businesses to increase employment for Australians. Aussie culture only in education studies, and or for public life. Return to values for a High Culture. Multicultural infestation to be dumped. 457 Visa scabs taking Aussie jobs all to be sent to the next boat out of Australia. [along with fake refugees] Shutting out immigrant settling, avoiding further decline to our Australian way of life. Re-establish trade training/education to ensure productive work skills for youth. No TAFE fees Restrict politician’s perks to provisions of Constitution for allowances only. ALL other snout in trough type payments to be redirected towards Work Corps for unemployed, to maintain independence and dignity. Unlawful “fines” to be abolished, and innocent until proven guilty by peers rule of law returned for citizens. Foreigners bidding for Aussie housing to face 100% stamp duty charge, to be allocated to Aussie public housing, etc. Parental input for compulsory rehabilitation of addicts Martial Law principles to eradicate Drugs of Death. Drug cartels/promoters will do so at OWN PERIL Contact - Mobile 0408 554542 www.australiafirstparty.net email: ausfirst [ AT ] hotmail.com P O Box 223 Croydon 3136 Authorised/printed by R Blythe Warbuton Hway Wesburn 3799 TAKE BACK OUR AUSTRALIA – JOIN AUSTRALIA FIRST

Struggling with the growth nightmare

My comment in response to "Struggling with the Growth Dream": Dealing with the growth lobby on population numbers is like dealing with alcoholics on alcohol. They keep telling you how much fun it is. When you point out the devastation it is causing, they say, but, if you switch brands or drink milk first or practice 'smart growth', it will all be alright. When you point out that the rent has not been paid and the children are running around without shoes, they suggest you should work harder and pay more taxes to build more roads to cope with the extra traffic. Growth is an addiction and the people who are hooked on it are divorced from reality, self-obsessed and will rationalise and lie about any problem their addiction creates rather than accept responsibility and stop the first development that leads to the ongoing speculation, debt and loss of democracy.

"The tribunal in September granted a permit for a seven-storey block of 112 apartments in Preston despite local law stating developments should not exceed six storeys, or 20 metres.

The tribunal ruled the developer had accrued rights from a previous permit issued for the site in 2012, and therefore the council’s mandatory height controls, introduced in June, did not apply.