Maryland Wilson, President of the Australian Wildlife Protection Council, announced today (June 30, 2015) that Queensland LNP Senator Barry O’Sullivan will have a singular focus when he spearheads an Australian government trade delegation to China to try to seal the deal on kangaroo meat exports. #kangaroo #exploitation. The Trans Pacific Partnership agreements, if they go through, would worsen the already terrible situation of many Australian native animals and could provoke species extinctions. 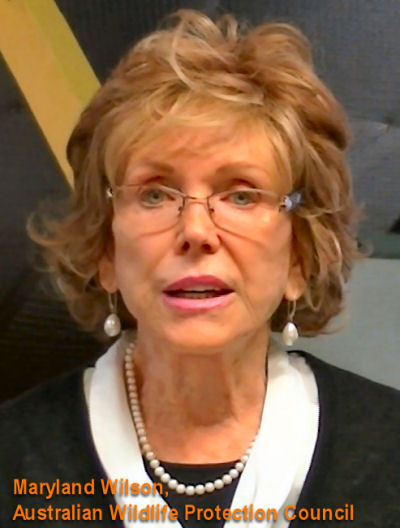 Calling to friends of wildlife, and drawing attention to the plight of kangaroos as particularly urgent, President Wilson said:

"This is a huge issue now.

Kangaroos will be global 'asset', not just our native wildlife, protected as they are,

With more than 1.3 billion people in China, with an appetite for kangaroo meat, it's unsustainable. Nobody really knows how many kangaroos in Australia, and numbers have plummeted in NSW. They are hated because they cause "grazing pressure" (they eat grass!) and the government wants every blade for livestock - despite the drought over Queensland."

Donate to the AWPC to help Maryland's entirely volunteer non-profit organisation continue its great service to Australian wildlife. AWPC is a tiny organisation that punches above its weight, made up largely of hands-on activists. Download the AWPC Donation form.

China is not a fit global leader

Australia's top public servant, Michael Thawley, secretary of the Department of Prime Minister and Cabinet, has dismissed any prospect of China leading the world, saying the economic giant is neither willing nor able to solve global problems. "China wasn't ready to take on the responsibility either economically or politically or security-wise," he said. SMH: China not fit for global leadership says top Canberra official Like human obesity, "growth" is not an indication of exemplary ethics or strong and ethical leadership. There are serious human and animal rights abuses in China. The anniversary of the 1989 4th June, the Tiananmen Square massacre, is generally showtime for the always-bubbling tension between Chinese authorities and the dissidents and activists in the country, who seek more freedom for themselves and their countrymen. There are now 70 Australians detained or jailed in China?—?a number that has almost doubled in the past five years. An estimated 500,000 people are currently enduring punitive detention without charge or trial, and millions are unable to access the legal system to seek redress for their grievances. The Hubei-based Civil Rights and Livelihood Watch group described a "worsening and regressive human rights situation," and a domestic security regime that is more oppressive than anything seen in the past 25 years. China is famous for animal rights violations. Yulin, China is home to the infamous and controversial Yulin Dog Meat Festival, which is no stranger to protests since tens of thousands of dogs have been slaughtered and eaten at the annual event. #rmns"> China pole dancing animal rights for dogs There are some people with compassion for their "best friends". A dancer recreates the image of a captured dog being torched by flames. The caption reads: “Burn: I die painfully and slowly just to satisfy their wants. Crispy skin. How does it smell to you?” More than 20 activists from various cities in China, most of them Buddhists, spent more than 100,000 yuan (around HK$126,000), most donated by animal lovers, to buy and save around 400 dogs from the local markets.The activists have re-settled these dogs on a farm in Shangrao, Jiangxi province. This sick and evil "festival" is an obscene display of human "dominance" of animals, and illustrates the depths of depravity that humans are capable of descending to. China's economic boom does not give them any leadership qualifications. They are the Goliath, impressive, but immobile and easily killed by strategy, skills and intellect.

United States not fit either - maybe multi-state world is better

The united states has a very poor reputation for treatment and protection of farm animals. Like Australia it only accords animals chattle status, whereas in Europe there have been gains in treating animals as sentient creatures.

And the United States has more people in prison than any other state, most of them non-whites from significant poverty whom the system provides with totally inadequate public defenses, even for very serious crimes.

"In October 2013, the incarceration rate of the United States of America was the highest in the world, at 716 per 100,000 of the national population. While the United States represents about 4.4 percent of the world's population, it houses around 22 percent of the world's prisoners.[1] Imprisonment of America's 2.3 million prisoners, costing $24,000 per inmate per year, and $5.1 billion in new prison construction, consumes $60.3 billion in budget expenditures. As of 2014 the high incarceration rates have started to modestly decline, although still remain the highest in the world.[ Roy Walmsley (November 21, 2013). World Prison Population List (tenth edition). International Centre for Prison Studies. Retrieved July 11, 2014.]"

"A substantial body of research claims that incarceration rates are primarily a function of media editorial policies, largely unrelated to the actual crime rate. Constructing Crime: Perspectives on Making News and Social Problems is a book collecting together papers on this theme.[ Potter and Kapeller (1998)]" (https://en.wikipedia.org/wiki/United_States_incarceration_rate

America also has the death penalty in a number of states, although only a few still exercise it.

"Since capital punishment was reinstated in 1976, thirty-four states have performed executions. In 2013, 39 inmates were executed in the United States, and 3,088 were on death row. Many states such as Texas, Oklahoma, Florida, Missouri, Ohio, Virginia, and Arizona, regularly execute convicted murderers. Source: "Capital punishment in the United States," https://en.wikipedia.org/wiki/Capital_punishment_in_the_United_States

American prisoners volunteer to have drugs tested on them as a way of earning money in a manner that flies in the face of human rights. In privatised prisons they are treated as slave labour - although this was also the practice in government prisons and dates back a long time, perhaps first exposed by Nancy Mitford in The American Prison System.

Evidence of very poor capacity for just trials grows daily in the increasing count of people on death row whom DNA techniques has shown to be innocent of the crimes they were charged with and sentenced to death for.

And many people think that the United States is the biggest global bully of the lot, with its unaccountable and lethal use of drones, its outsourcing of wars which people can invest in on the stockmarket, and its ideology of war as peacemaking. It has more military bases around the world than any other country and it just so happens that the countries where it has those bases do what it says. For an informed comment on the United State's dominance of supporting countries, see, "Vladimir Putin on France and Europe: "NATO Member States have renounced their sovereignty"

Not saying that China is a great place for justice and democracy, and certainly not for generalised kindness to animals, but seems that the United States is only a democracy in name. Recently the Princeton University analysed the situation and declared it an oligarchy. See Martin Gilens and Benjamin I. Page, "Testing Theories of American Politics: Elites, Interest Groups, and Average Citizens" (2014) which you can download here:
http://journals.cambridge.org/download.php?file=%2FPPS%2FPPS12_03%2FS1537592714001595a.pdf&code=d3a67daeef13e420db323feb4fadd1e3

Community Run Petition: Stop the trade of kangaroo meat to China Studies show that the grazing pressure of one kangaroo is equivalent to just 0.15 - 0.2 of a sheep, and is minute when compared to cattle. In practical terms this means that the damage on grazing lands attributed to kangaroos has been grossly overestimated by as much as 470 per cent. “This would mean that kangaroos are a much smaller component of the ‘total grazing pressure’ than is generally accepted.” The current commercial slaughter is cruel, unjustified, unscientific, and is devastating to Australia’s kangaroos . Research has established that kangaroos are not in epidemic / “plague” proportions, that farm waterholes play no part in increasing kangaroo numbers, that few joeys survive, in fact only 25%, survive to adulthood. The kangaroo killing industry has been protected as if it were a national saviour of Australia’s rural economy, supported by a series of myths which no one ever bothers investigate. The industry claims that kangaroo grazing contributes to 30% of grazing pressure, when this is totally untrue. A female kangaroo and joey have as close a bond as primates. Each decade, over 30,000,000 are killed, leaving one million orphaned joeys, to die from chilling, starvation, attached by feral animals, each year. Kangaroos are not killed hygienically in an abattoir and injuries are not monitored at the point of kill because the kill is un-policed. There is no potable water, to wash knives, hatchets, the ute, hanging hooks for inside the chiller boxes. Kangaroos are shot in the outback at night in unhygienic conditions, disemboweled among the faeces of other animals, dirt and dust and insects. In 2009 Russia banned kangaroo meat due to hygiene issues. Raw kangaroo meat can carry hydatids, nematodes, parasitic worms, and other bacterial fungal and viral diseases, such as salmonella and E-coli. Wake up Australia, while there’s still time to save your wonderful kangaroos. Community Run Petition: Stop the trade of kangaroo meat to China