Available in kindle and in print. This book was inspired by 'collapse theory' to look at stable systems in animal and human populations and to define their principles. It introduces a new biological theory of human population numbers, land-ownership and property inheritance. As such it is also about the economic 'fundamentals' of civilisation. Using the concepts of endogamy and exogamy the author points out the persistent importance in world affairs of clans and tribes - be they royal dynasties, family corporations or nation states. Newman shows that in Britain, the United States, Canada and Australia, power, wealth and land are accumulated in fewer and fewer hands by systems that promote disorganisation and displacement of the masses. In contrast, other modern systems in continental Europe and elsewhere, enable families and clans to much better defend citizens' rights and to democratically conserve local land, resources and environment, effectively resisting population growth. This information is not available elsewhere and needs to be widely known. The book is the first of four volumes. SECOND VOLUME NOW OUT: Demography, territory, law 2: Land-tenure and the origins of capitalism in Britain, Countershock Press, 2014. 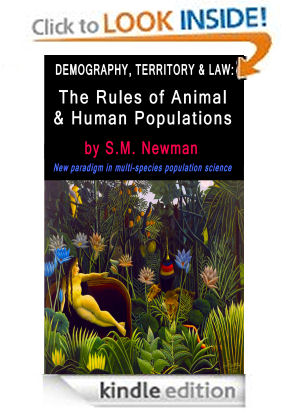 "Concerning Sheila's [theory] chapters, they are very sound according to my knowledge. I could not find anything to be critical of. There is no question of the genetic benefits of avoiding incest in populations, but the selection processes are a little difficult to understand. Sheila's two chapters appear to be sound to me and I do not have any suggested changes." Prof. Pimentel, Population scientist, Cornell University.

"This book takes us to a completely new paradigm in multiple species population science. It shows how little we understand, and how much we need to know, of the sexual reactions when closed colonies with an orderly reproduction system are destroyed, be it people or animals."(Hans Brunner, Biologist and Forensic Animal Hair expert)

A new theory of the biological basis of land-use planning, political systems and demography by an evolutionary sociologist. It exercises the kind of “consilience” that E.O.Wilson hoped could save biodiversity. 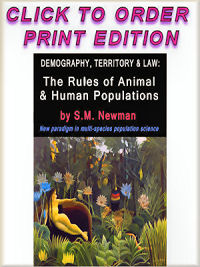 The author identifies a poly-species norm and a genetic algorithm using well-established biological and anthropological studies, then relates these to the human land-tenure systems which underpin our political systems. The book convincingly shows how one land tenure and inheritance system promotes steady state societies and the other promotes uncontrollable growth and overshoot of resources. This theme is developed more in the subsequent volumes of this series, which compare the Germanic (English) and the Roman (Napoleonic) systems in European history.

The Rules ... begins by describing the social costs of infrastructure expansion and population growth in economic growth systems in some modern societies. After reviewing population theories, Newman introduces a new theory of an additional function of genetic diversity in two chapters that look at impacts on fertility opportunities of the Westermarck Effect and incest avoidance in non-human species. A final chapter compares these with kinship marriage restrictions and non-sale of land in Pacific Islander and other traditional social systems. It's all about the balance between endogamy and exogamy, which makes and breaks clans and tribes and their control over territory. We learn that modern societies ignore these traditions at their peril and that Anglophone systems with rapidly growing populations a seeming norm are quite different from those of continental Europe, where population growth is slowing. We come to understand that our destinies and societies are still very dependent on who we are, whom we marry, how far away we live from our parents and whether we inherit, buy or rent, plus the transport we use.

Most economic demographic theory begins with the industrial revolution as its norm, ignoring the exceptionality and relative transience of this period and treating other species and the natural environment as ‘externals’. Although informed by ‘collapse’ theory (Tainter) Newman is interested in what keeps some societies going for thousands of years. She finds that stable populations are not limited to hunter gatherer communities. Newman has a completely new take on the 'riddle' of Easter Island which will surprise everyone.

Demography Territory & Law: Rules of Animal & Human Populations, Countershock Press, 2013, is the first of four by environment and energy sociologist, Sheila Newman, in a series identifying and comparing the biological origins and outcomes of two major world demographic economic and political systems. The rest of the series develops this theme and theory in the following titles, of which the second will be available within weeks and the third late 2013 and the fourth by 2014:

The core biological theory of this series was first published as The Urge to Disperse., Candobetter Press, 2011. This new book provides human societal examples to which the Urge only referred in passing. Sheila Newman is also known as editor and author of energy resources analyses including, The Final Energy Crisis, 2nd Ed. Pluto Books, 2008. Her website is at Sheila Newman, where she writes as a journalist and researcher on growth lobby politics and illustrates articles.

Parks should be financially sustainable?? It's because of the land taxes and rents all around. They make it seem as if anything not actually dragging in rent is 'operating at a loss'. It's grass and trees for pete's sake! These politicians and trust managers are completely mad. See below:

http://www.smh.com.au/environment/conservation/critics-slam-plan-for-huge-retail-centre-in-urban-park-20130118-2cyoq.html#ixzz2IUzqCV3w "A STATE government plan to build a shopping centre in one of Sydney's most important urban parks is a self-serving ''income generator'' that rides roughshod over the public good, critics say. The trust behind the proposal acknowledges ''philosophical questions'' about building a retail precinct in the Western Sydney Parklands, but says the project is necessary to bolster revenue. The 5300-hectare green space, hailed by the former premier Bob Carr as the ''the lungs of western Sydney'', was dedicated to the people of NSW in 2004. It stretches 27 kilometres from Quakers Hill to Leppington and attracts almost 1 million Sydneysiders a year." [...] " "[...] The director of the Western Sydney Parklands Trust, Suellen Fitzgerald, said the project would create 500 jobs and $120 million in capital investment. ''Many parklands around the world recognise that sustainable funding is key to their future … and we are committed to getting the balance right,'' she said, adding that proposed land uses, such as a liquor outlet, were ''indicative only''. The trust would respond to the issues raised in submissions, she said. The debate comes as other parklands across Sydney embrace commercial models. Centennial Park receives 4 per cent of its annual operating budget from the state government, down from 20 per cent a decade ago, plus one-off funding for capital works. It relies heavily on ''revenue-generating assets'' such as Moore Park, Fox Studios and the equestrian centre. Activists have long feared commercialisation of Parramatta Park, parts of which are world heritage listed. Parramatta State Liberal MP Geoff Lee reportedly said last year the park must become ''more financially sustainable by having more activities such as sport and concerts.''

What a SICK society Australia is becoming. We are slaves to consumerism and rent.

There's no life without breath, oxygen, and the important role of lungs. However, governments, economists and property developers, in their quest for unending greed and profits, are eyeing Sydney's food bowls and natural habitat zones. A sixth generation of their farmers to carry on the tradition of farming at Camden, and are determined to protect the ‘lungs of Sydney' through a new project caring for Matahill Creek in the Cawdor Valley. They are producing high quality livestock products, and mixed farming. They say that there are pressures from developers, being close to Sydney. They also say Sydney would be harder to live in without its food-bowl and open air "lungs". They are doing what they can to prevent nitrogen and phosphorus from leaking into the Nepean River. The State government plans to build a shopping centre in one of Sydney's most important urban parks is a self-serving ''income generator'' that rides roughshod over the public good, critics say. It's a 5400 hectare green space that Bob Carr called the "lungs of Sydney". It is designed to hold a supermarket, a large liquor store, specialty shops, car parks and bulky goods outlets. What species, with only a small piece of habitat suitable on a finite landscape, would consider bulldozing ecological communities and promote endless population growth? Modern humans have lived on our planet for 200,000 years, but are determined to undermine what provides our quality of life, our fresh air, and even our food, for short-term cash flows from property and commercial developments. As former premier Bob Carr has said in the past, the people of Australia do not want all of the east and southern coasts of Australia, our "green" fringe, to be developed for 50 million people. Sydney is overpopulated, but still the O'Farrell government continues to encourage home buyers to buy new properties rather than existing housing. With few economic activities in Australia, except the mining boom and property development, we are locked into destroying and eating away the ground that feeds us, and supplies any quality of life - and compromising our own long term survival.

Native Australians suffered no worse than the native English

The following was posted as a #comment-182277">comment in response to The Troubling History of Thanksgiving (28 Nov 2014) by Gary G. Kohlson on Consortium News:

In Britain, the theft of common land and dispossession of its inhabitants was termed 'enclosure'. Descendents of the dispossessed were sent to Australia in 1788 as convicts.

This is described in the book Demography, territory, law 2: Land-tenure and the origins of capitalism in Britain, New Theory by Sheila Newman, Countershock Press, 2014.. More about the series here: Demography Territory Law Series by Sheila Newman. I have almost finished reading it and will review it shortly.

I saw Sheila Newman's theory of kinship laws and fertility opportunities (http://candobetter.net/node/3155) exemplified again on Catalyst of Feb 21, 2016. The Catalyst story was about a woman who is looking at the DNA of tribes in Africa to compare genomes and to compare with Europeans. In describing the hunter gatherers of Namibia she noted that they already knew about genetics and cited their marriage rules which exclude marriage to cousins- I think it was first and second cousins and marriage outside the group is also prohibited. Polygamy is also prohibited because , the scientist explained, it is against their interests as desert dwellers for them to have too many children. These were elements of Sheila's theory in action. The logic and veracity were not questioned, and were presented as a known social dynamic.