Time for a Royal Commission to examine the Developers' World

How dare the Urban Development Institute of Australia tell the State Government that it should set housing targets for each council to cope with Melbourne's rapid population growth and then if we don't meet the targets they set we will be victimised. [1] They even specifically mentioned Boroondara and Stonnington as not pulling their weight and referred to NIMBYs. As a resident of Boroondara I can assure the Development Institute that Boroondara is being flooded with buildings to such an extent that the whole neighbourhood character is being ruined, what on earth do they want. High rise on every suburban street?

The real problem is that Melbourne is getting too many people coming to the city. Even Planning Minister Wynne is quoted as saying that Melbourne has the highest growth rate of any city in the developed world. We have been saying this for years as we see it's livability being wrecked. People all across Melbourne are complaining as they see their areas being overcrowded and over developed. The Federal Government must reduce immigration - tell them we are full to bursting. Do they want to turn us into a dense third world city with polluted gridlocked streets? 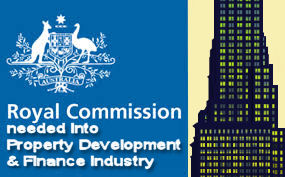 Below is the article that caused the suggestion that we need a Royal Commission into how development is conducted in this country.

A DEVELOPER lobby has called for suburbs which don’t pull their weight on housing supply to be punished with less investment in infrastructure.

“That new housing stock, if delivered, should be accompanied by infrastructure investment from government,” she told a UDIA event yesterday.

“And if it’s not delivered where it should be, then investment in infrastructure in those areas should be restricted.”

Developers told the event councils like Boroondara and Stonnington were not providing their share of new housing.

Ms Addison said there were “politically unpalatable areas of Melbourne where growth is uncomfortable ideologically or from a position of NIMBYism (not in my backyard)”.

“But if that growth were to be followed and serviced by infrastructure, then I think the community would definitely be more at ease,” she said.

Planning Minister Richard Wynne said Melbourne had the highest growth rate of any city in the developed world."

Developers' World should be a THEME PARK, created for these growthists. They can have towers reaching to the sky, into the clouds, and people hemmed in cheek to jowl and face to face - all paid actors. They can experience the crush of standing in queues waiting for already overloaded public transport, and the stresses of congestion. They can watch crowds flowing in, and crushing the lanes and roads of the city, all pushing up real estate prices in a simulated game. This would alleviate the pressure of their dreams being imposed onto the public. They can have their "fix" of endless growth, and city-cramming, so suburbs in Melbourne can be safe from their desires, their malignancy and addiction. There are e-cigarettes for smoking addicts, AA for alcoholics, safe drug-rooms, so why not a safe place for growth addicts such as property developers, where they can have their addictions alleviated and treated?

I think you need to add wads of cash to make the simulation more satisfying for them. Also you would need some politicians (or convincing actors as you suggest) to invite them to 'exclusive' forums where they can feel special, powerful, influential and admired. To really complete the picture though, add some big banners on buildings and in newspapers all lauding how wonderful it all was, and how hip, sustainable and cosmopolitian everyone in the theme park is as per: https://www.theage.com.au/business/companies/ugg-boot-factory-to-become-... And then they can each try and build taller and taller buildings - perhaps reaching to the moon itself! Oh, the ecstasy of making a statement like that!! The pure egotistical pleasure of it!! https://www.domain.com.au/news/first-residents-move-in-to-australia-108-...

The Fletcher Memorial Home by Pink Floyd was about politicians, but the Australian growth lobby personnel are very similar in their addiction to the limelight and their sociopathic attitudes. And they are running our political system. Great song: