Today, 24 February 2020, Frankston Councillor, Glen Aitken, led a protest with a proclamation against the destruction of trees in a section of rare bush habitat along Kananook Creek. His speech is transcribed inside this article. The Victorian Railway Level Crossing Removal Authority is the author of what appears to be arrogant and gratuitous removal of precious old trees and bushland. This bushland is part of a several kilometer connected habitat that runs along the banks of Kananook Creek. The purpose of the moonscaping of this area is to construct a concrete bicycle path that no-one here wants. Ironically the State Government and the Greens have been promoting cycling as a healthy 'green' activity, whilst using it to spearhead land-clearing in bushland and parks. Residents feel that this shock and awe approach is to soften them up for the execution of an overall plan to infill and overdevelop this area, as part of the State and Federal Governments' project of engineering population growth and overdevelopment, at the behest of the property development lobby, whom they serve.

Cr Glen Aitken acknowledge the Bunerong people and those attending, including people who had travelled quite a distance. Additionally he acknowledged the people who in the past and the present and into the future have fought so strongly for the environment in Frankston and surrounding municipalities and beyond. We would be lost without their efforts. He aknowledged Cr Steve Toms who also attended.

"Today is a powerful affirmation of our values and determination to guard and cherish our land. Today is an opportunity to send a clear message to parliament and authorities that our natural environment is not negotiable, and must be protected. 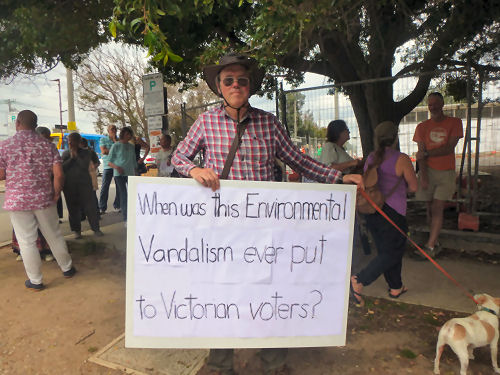 This is a proclamation on behalf of our community to stand strong against planning totalitarianism. And to challenge any government or authority that claims to have listened to the community and then turns around summarily to brutalise land and places we all love.

In the beginning, the Aboriginal people gathered on this land, where we stand today. They hunted and fished for survival. They cared for the land and lived with it in harmony. Kananook Creek was once a vital waterway, connected to the vast Carrum Carrum Swamps, part of the huge and extensive ecosystem, which has now largely vanished. The creek and its associated vegetation has long been treasured as it represents an irreplacable reserve that can never be replicated again.

Throughout the years, many people, particularly from the mid-20th century, to this present time, have engaged in heroic labours and struggles to save both Seaford Foreshore and Kananook Creek from degradation and exploitation. They have held high the torch of environmental justice.

Only recently, Frankston Council, creditably, opposed any further development of the Green Wedge, and Council's decision is vindicated. By contrast, the wilful destruction of coastal vegetation here is absolutely shameful, and totally contrary to widely accepted environmental principles and public expectations. How has this happened? 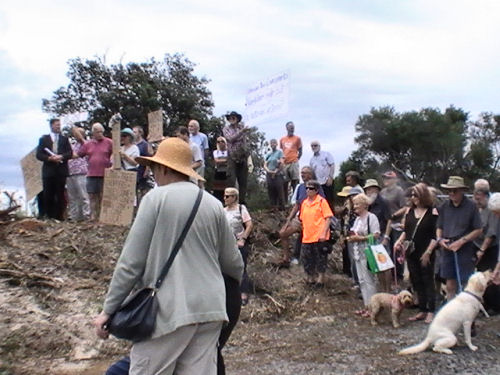 There are numerous ways to 'arrive' with a 'misreading' of public opinion, through surveys and other means, such as methodology. Anyone can get a staged answer according to the style of question that is asked, which in turn can produce the exact result that was wanted and engineered in the first place. Another way to silence anyone who speaks out, is to subject them to public embarassment or political ridicule.

Many people complained throughout the entire consultation process, but information was difficult to pin down, and [they] were not satisfied with answers that lacked substance. Our own council had difficulty in securing detail when we requested information, and were taken by surprise with outcomes.

Given the tree losses that have occurred, it is only reasonable many are now asking, 'how did this happen'? Local MPs should answer to the community for what has been done. A thoroughly detailed and educated approach ought to have been taken. And what is going to be done to ensure that this does not happen again?

In Seaford, with this project, there must be a rethink and proper consultation before any further works are carried out. With a huge population increase planned for Melbourne, we have seen a loss of values we have all cherished, such as local identity and character being bulldozed to make way for towering monoliths and multilevel appartments.

Our history is being lost and the places we identified with are vanishing. Residential overcrowding, loss of green space and canopy trees, with housing prices escalating, far beyond the means of many, who will never be able to purchase, and continue, as they age, in rental, 'til they are forced out through inability to pay. That has changed the social landscape.

Our native reserves, our green wedges, and any other open spaces are consequently more important and more critically needed than ever before. 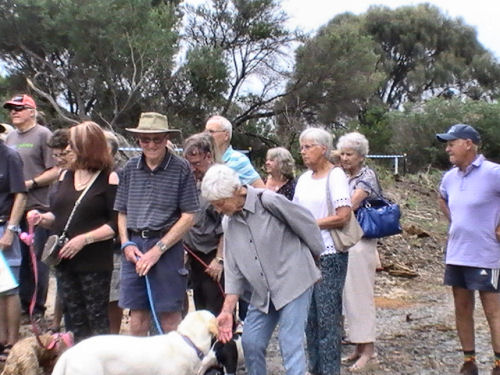 [Picks up a silver coloured cup full of woodchips.] These remnants are from a tree that was about 80 years old and therefore began its life as a young seedling at the end of the Great Depression and the outbreak of World War Two in 1939. It saw the reconstruction years of the 1950s and it continued to spread its branches, providing shelter and food to native birds and animals. It saw the turn of the millenium and continued to cast welcome shade and held its place with pride in our landscape - until this February, when it was unforgivably dragged to the ground and destroyed. These chips are the body and the spirit of the tree and I now return them to the earth.

In adversity and hardship, we grow stronger and, in the face of environmental brutality, our voice becomes louder. We will never surrender to stupidity.

We urgently seek greater recognition and protection for all native vegetation. We demand that government and all relevant authorities rewrite consultation formulars to guarantee real consultation processes instead of public pantomime. We call upon the State Government and associated authorities to account for what has happened here in Seaford. And Carrum, for that matter.

I'm going to just add one more comment about Carrum. The vaunted proposal was to provide a place with lovely parks and new facilities. When you go through Carrum today, and see what has happened, and that almighty grey monolith of concrete and steel - it has cut the guts right out of Carrum. It has destroyed Carrum as a kind and generous low-key postal destination forever. That is unforgivable!

And, we call for a complete reassessment of state planning policy in order that strong, clear and visionary policies be written and enacted, that are based on the human values that protect the history, environment, and liveability of the greater metropolitan area."

The transcript made by the author of this article from the video.

Stupidity has the heavy machinery

Cr. Aitken says "we will never give in to stupidity" As this unfortunate case illustrates , stupidity has the heavy machinery. I guess many heroes would lay their bodies on the line to save trees and other vegetation but they may need to lie in wait as often we don't know when these acts of destruction will occur. It's really tough trying to save things from the thugs.