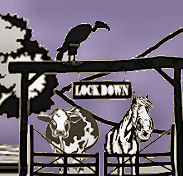 This is an allegorical poem about some creatures on a farm during a covid-like lockdown.

THE BARNYARD’S ARK by Sandra Garnier

There lived a barnyard of animals

Of all descriptions, some large and some small

Some short and some tall.

They made up the barnyard family,

Amid the laughter, fun, and calamity

Which sometimes occurred, when hearts were ripped and lips were furled

Little spats, here and there, “That’s my corner, that’s my lair!”

It was tremendously hard, as they were carrying such a large load

Being penned in by fences, and ditches, and shut up at night

They couldn’t go out or even fly a kite

For the gatekeeper appeared each day of the week

To keep orders in place, to keep everything neat

To safeguard the animals from the perils which lay outside

Where none were safe, and there was nowhere to hide.

All he could offer them was a grain of protective feed

Some took it eagerly, some didn’t see the need

Some protested and voiced their fear

What were the effects, today, or in a year?

The gatekeeper kept to his script to conform

To keep the status quo, to not waver, from the norm

But the barnyard animals had been locked in for so long

They had forgotten the music, stopped singing their song.

Some of the animals even touted angry, screwed-up faces,

While others walked stooped, tears flooding onto untied laces

Some animals escaped. They wanted change

They wanted to have everything open and welcoming once again

Some animals mused, Is this confinement just a long drawn-out dream?

Many concluding life is not always as it seems.

The gatekeeper reminded the discouraged ones

That there was still hope, when all was said and done

They will soon be free, lying out under the sun

But that was of little comfort to hearts heavy with grief

Their life had been stolen, and they wanted to catch the thief

To make him pay, to take a famous line, ‘to make their day.’

Both vexed and with a spirit of right

It was a sorrowful sight

For they were once all friends,

Now enemies from storms of hype 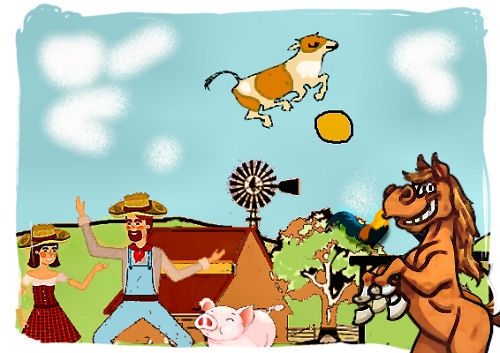 One golden day, at an unexpected time

The gatekeeper opened the gates, announcing you will all be fine

Go out and experience freedom, you must no longer get in line

The barnyard animals reacted, in voices loud and clear

This is the beginning of a new time, where there is no fear

The rejoicing continued, some scratching the dirt to their heart’s content

Some rolling in mud, kicking with glee, content not to vent

Some ran through the meadows, seeking connection with a new love

Some got down on their knees, praising the sun’s warming rays above

While some reunited with family, where happy tears were now the norm,

Having survived the wind and hail, form the bitter, long-lasting storm

Some danced in the streets, exuding a large-toothed grin

It was a wonderful new day, when the sunrise rose from her sleepy slumber

They had all come through the abyss, landing in freedom down under

The endless months had not all been in vain, things were no longer the same

For each one had been given a gift, a precious insightful light

An awakening of new sight

The animals had come to recognize their values so dear

They had come to appreciate their family, now so near

Some had reflected, and seen life anew

Some were determined to set sail with a new crew

For having been through the chaos, pain, and the grief,

There now was contentment, joy and relief

Freedom thrust on us

A beautiful allegory of real freedom attained.  It's unfortunate that freedom has been thrust upon us as they no longer care,  it's too expensive and too much trouble to protect the population. Governments are just sacrificing older and weaker people.