To my knowledge, as a land-tenure and population scientist, these kinds of reports have been coming out from insurers since at least the 1980s - but with a crucial difference.  Then we were warned that human population growth was causing us to build in unsafe areas, and that the infrastructure intensification required to service growing population density meant higher replacement costs.  To attribute greater precarity to climate change alone is extremely misleading, but it is a trend led by the ICPCC which has persistently refused to educate people to consider reducing their family sizes, and for governments to stop engineering population growth upwards via mass migration programs. 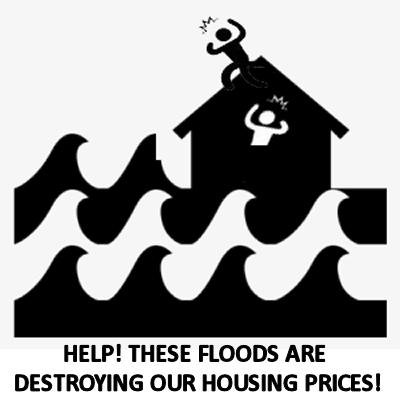 “As we face ongoing climate change challenges, the distinction between Black Swan Events (global events that are so rare that normal economic models cannot predict them) and structural change (dramatic shifts in the way a country, industry, or market operates) continues to narrow due to the increased frequency of artificial and natural disasters. About one in 25 Australian homes are at high risk of becoming effectively uninsurable by 2030, according to a new Climate Council report based on analysis by a climate risk assessment group (ABC, 2022),” says Dr Wong.

Dr Wong, who is a senior lecturer in the School of Property, Construction and Project Management, suggests that rising sea level might cause 'signficant downward pressure' on the prices of 'flood-prone' properties.

“With the insurance companies already imposing higher insurance premium (or not insuring at all) and the banks getting more reluctant to lend on flood-prone or cyclone-prone locations, it is reasonable to conclude that flood-prone properties will be facing significant downward pressure due to rising sea level and as such, to under-perform other residential property types into the future.”

To me this is like a triage-nurse pointing to a hangnail when a patient presents with multiple knife-wounds. Of course, to a fingernail-painting manicurist, this might be seen as the most relevant point of intervention for their expertise.  Then again, perhaps there is meant to be a subtle message here, vis: As knife victims should avoid people rushing towards them with knives pointed, so should investors avoid building near beaches. Position, position, position!

As long as we approach housing as an investment, rather than as crucial for human shelter and survival, we will helplessly continue to build more and more densely in dangerous places, creating our own disasters.  The commodification of housing has become so entrenched in Australia, that the human and environmental values have become disconnected from its discourse. The constant push for mass migration as a way to increase housing demand and financial speculation has taken on a life of its own, demanding endless sacrifices. The industry tries to develop and settle every place where cars or bicycles will go - swamps, low-lying coasts, forest edges, farmland - and blames the problems on climate change.

What is the housing market like in Pakistan at the moment? With rapid population growth, demand is up. Supply is down.  The problem of submerged sites is mostly temporary. And if more land is submerged semi-permanently, it can only drive demand up further.  So maybe I'm missing the point. Disaster may be bad for humans, but it seems that it is inevitably good for the market, because it always stimulates demand.

The only way out would be for Australians to use birth-control and limit the size of their families - What's that you say? They already do? Well, then the government should limit immigration.  But that would depress the property market, so it won't.

Tonight's Foreign Correspondent is about the Colorado River's dramatically dropping water levels. An interviewer on site observed that this would have a terrible effect on tourism.

(Reply to 'Similar values expressed on Foreign Correspondent.') But it will drive up the cost of water and food! There is profit in that. And it might make the tourists more interested in coastal land marks in California, to the benefit of hotdog stands and art galleries in that area.  The market always provides silver linings for survivors.

As a shareholder, why is AGL ignoring the huge cost difference between NSW and Victorian power stations (TheAustralian 30/9 & 1/10)?

In contrast, Loy Yang A burns brown coal/lignite that has no other uses or value, so its feedstock costs are zero. That was a giant advantage seen by Sir John Monash 100 years ago, and still true today.

Lignite is "wet" so yes, burning it emits lots of water vapour which is also a powerful greenhouse gas. Cloudy nights are warmer than clear sky nights.

Water vapour from lignite is "bad". Water vapour emitted from new cars and trucks burning hydrogen is "good". That's the etiquette in polite climate society, and within the brain-dead AGL board.