Your ABC lies, dismissing as 'shams' the referenda of residents of the East of Ukraine to join Russia

Update, 28 Sep: More lies from your ABC. The title of an ABC story, published on 25 September 2022, endorses the claim made by the West that "they are illegal shams." The article starts out, "Residents in four occupied regions of Ukraine are being pressured by their Russian-backed officials to vote in a self-styled referendum to classify parts of the country as Russian territory." The article goes on to claim:

The structure of the voting system has cast extreme doubt over the validity of any votes. There are no independent observers, and much of the pre-war population has fled.

The above is an out-and-out lie. The RT news bulletin of 9AM (MSK) or 4PM (UTC+10) embedded below gives testimony from a number of the region testifying that the referenda are being fairly and transparently conducted. You may have to download and use TOR Browser to watch it, in view of the ever-tighter censorship in Australia for people wanting to make their own assessments of what is going on in this war. 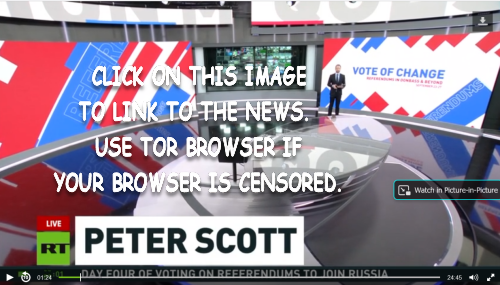 Those interviewed also describe how the regime of President Volodymir Zelensky has attempted to terrorise them out of voting using verbal threats through his newsmedia as well as armed attacks including with artillery and rocket attacks. This is also confirmed in an interview by Eva Bartlett (@EvaKBartlett)of a resident of Gorlovka (or Holovka)who voted 'yes' in the referendum:

[Is anyone forcing you to vote?]

[How has your life been these past 8 years?]

"A nightmare. You hear the shelling yourself. Eight years of shelling from the Ukrainian side." https://t.co/VnTvANvM9Y

My statement at a press conference in #Donetsk yesterday after 4 days observing referendum prep & voting, ballot counting & external voting. The West has always lied & it will continue to lie especially when people resist their tyranny & oppression. #Donbass_is_Russia pic.twitter.com/g2SZleeeZ2

Appendix, 8 February 2021 : Joe Biden threatens, "If Russia invades…then there will be no longer a Nord Stream 2."

As people around the world are scratching their heads and wondering which state actor, could be so unconscionable as to deliberately sabotage Nord Streams 1 and 2, thereby depriving Europeans of even more natural gas before the coming winter should look at the following news report from the Australian Broadcasting Corporation (ABC):

Pres. Biden: "If Russia invades...then there will be no longer a Nord Stream 2. We will bring an end to it."

Reporter: "But how will you do that, exactly, since...the project is in Germany's control?"

Biden: "I promise you, we will be able to do that." https://t.co/uruQ4F4zM9 pic.twitter.com/4ksDaaU0YC

Comment: This predates by 15 days, the launch, on 24 February 2022, of Russia's "Special Military Operation to Denazify and Demilitarise Ukraine" This military action has been labeled 'aggression' by almost all the corporate and government media in the West. An alternative point of view is that the actual aggression was, in fact, launched against both Ukraine and Russia by the U.S. with the Maidan colour revolution which started in Kiev in November 2013 and concluded with the coup of 22 February 2014. This was openly funded, as said at the time by Victoria Nuland, Assistant Secretary of State for European and Eurasian Affairs, by $5billion from the US government.

The Maidan coup is only one of a great many examples of military coups, 'colour revolutions' and outright acts of aggression committed by the United States since the end of the Second World War in 1945. By one estimate, more than 20 million have been killed by the US over this period.

The 7:00pm television news bulletin of the Australian Broadcasting Corporation (ABC) dismissed as a 'sham' the referenda by the peoples of Donetsk, Lugansk, Zaporizhzhia and Kherson which showed overwhelming support for those regions being re-incorporated into Russia. Only supposed experts from Western-aligned nations were cited. None of the residents in those provinces were interviewed nor were any of the independent election observers, who all testified to the transparency and fairness of those referenda. Of course nothing said by any representative of the Russian Federation in that 'report' either.

A written, and somewhat less virulent, version of that ABC report can be found in Kremlin claims victory in controversial Ukraine referendums set to pave way for annexation (28/9/22). Unlike in the 7:00pm evening television news bulletin, the word 'sham' is missing.

Stand with Ukraine: give a this refugee volunteer fighter a home

Aleksandr has been fighting for the Ukrainian army but had to flee the country and now needs a home in the UK. I asked if anyone with a Ukrainian flag in their profile could provide him sanctuary but nobody has replied. pic.twitter.com/qQzvRA5l9i