Time to come clean with the real costs of water

Time to come clean on the real costs of water

The original case for Labor's controversial $1 billion food bowl upgrade was rejected by state cabinet because the government's promised water savings could not be achieved for the price tag of $1 billion, it has been revealed. Premier John Brumby has continued to tell Victorians that the savings could be made, despite not having any proof that they were achievable.

Already the project has identified 650 of the system's 6300 kilometres of channels for rationalisation, or downsizing.

Farmers claim millions of dollars of taxpayer funds are being wasted through the installation of unnecessary meters and other irrigation infrastructure on properties that have no use for them. 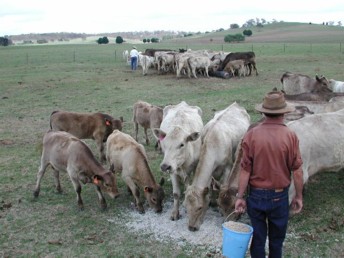 (cotton seeds being fed to cattle due to drought - source: wikimedia commons)

In April 2009, the Premier told Parliament: It has always been the basis of this project that there would be at least 225 gigalitres of water savings.
According to Plug the Pipe, the truth of the matter is that the pipeline has provided a mere 16.7 billion litres. That translates to a piddling 1% of Melbourne’s current water supply. So far it has only delivered 22% of the proposed 75 Gigalitres water and with only 139 days left available for pumping, the absolute maximum that can now be delivered is 58 billion litres.

To add injury to insult, the desalination plant costs rise to $5.1 billion, and $200 million a year to run. Average annual water bills soon to be $3000!

Farmers have slammed an independent report that says Murrumbidgee and Murray irrigators should make big sacrifices to help revive the Murray-Darling Basin. The cut would drain at least $2.7 billion out of the basin's economy, however the scientists say the pain would not be shared equally across the basin's 18 catchments. In most catchments, the required reduction is less than 10%.

However, in two catchments - the Murray and Murrumbidgee - the reductions are significantly greater, in the order of 39% and 65% respectively.

The Wentworth Group of Concerned Scientists' report proposes that the Murrumbidgee and Murray regions have their water caps cut by 65 and 39 per cent respectively.

Cost of saving the Rivers' Health

In late 2006 the ongoing drought in the Murray-Darling Basin combined with a lack of action on the implementation of the National Water Initiative highlighted the need for a clear statement on the reality of Australia's water predicament.  According to the group, We built our modern Australian economy in a period of much higher rainfall and we assumed that it would keep on raining. But it hasn’t.

Scientists for the Murray Darling Basin Authority say the cost of saving the river's health will be a $2.7 billion drop in profits from communities throughout the basin - a drop of 26¢ for every dollar in the Murrumbidgee catchment and 12¢ for Murray communities.

The Murray-Darling is a floodplain river system. However, the Basin is under enormous stress as a result of past water-allocation decisions, prolonged drought, natural climate variability and emerging climate change. A lack of water and the absence of natural flooding are having a significant impact on many key environmental assets - rivers, streams, wetlands, forests, floodplains and billabongs.

The Living Murray program was established in 2002 in response to evidence showing the declining health of the River Murray system. It is a partnership of the Australian, NSW, Victorian, South Australian and ACT governments.  The River Murray is currently experiencing its lowest in-flows on record and periods of drought need to be considered in delivering The Living Murray program.

We face a real risk that the ecosystems supporting the river system will collapse, undermining the businesses and communities that depend on it.

The best-available science suggests there is a substantial risk that a working river will not be in a healthy state when key system level attributes of the flow regime are reduced below two-thirds of their natural level. It selected water from the least profitable activities in each catchment so that the required volume of environmental water could be obtained at the lowest economic cost.

Dairy farmers need constant rain to ensure regular milk production. It is dairy and their fodder crops that have been consuming most of our irrigation water.  Australia’s milk production is enormous, and with good prices available overseas, much of it is exported. About 600 litres is used to produce a litre of milk.  The Murray-Darling food bowl has been upholding our economy for a long time.

President of the NSW Irrigators Council Col Thomson said the report should be disregarded because there would be some areas that probably almost cease to exist.  So easy just to dismiss wetland, river systems and a life-support system?

Water storages supplying Melbourne are 32.7 per cent full compared with 26.3 per cent at the same time last year, meaning dams are holding an extra 126 billion litres.  However, water restrictions have been eased!

When the drought was at its worst a pipeline was conceived to bring water from the State's North to Melbourne but recent wet weather, continuing water restrictions and the revelation the city has enough water for two years without rain has some questioning the project.

The protest group, Plug the Pipe has been most vocal in opposing the project. It says people, particularly farmers in the North of the State, are having their water rights taken away in favour of Melbourne's gardens.  Someone should be pointing out how we have been forced to build a $5 billion desalination plant because we forgot about water.  In Melbourne's population explosion, the Brumby government forgot about water so they've had to make the north-south pipeline over the hills to steal water from the bush!

It is all about politics, not logic or caution. We cannot be addressing climate change and water shortages while we are heavily dependent on unsustainable dairy industries and exports. However, it seems that producing food is a minor industry compared to the building industries and property development, supported by swelling numbers of city people who obviously pay more taxes and contribute more to the economy!

Energy and Agriculture Top Resource Panel's Priority List for Sustainable 21st Century is a new and hard-hitting report concludes that dramatically reforming, re-thinking and redesigning two sectors-energy and agriculture-could generate significant environmental, social and economic returns. The report prepared by the International Panel for Sustainable Resource Management, have reviewed all the available science and conclude that two broad areas are currently having a disproportionately high impact on people and the planet's life support systems-these are energy in the form of fossil fuels and agriculture,
especially the raising of livestock for meat and dairy products.

Agricultural goods, particularly products from animals, which are fed more than half of all world crops. Agricultural production accounts for 70% of the global freshwater consumption and 38% of the total land use. Food production accounts for 19% of the world's greenhouse gas emissions and 60% of the phosphorus and nitrogen pollution and 30% of toxic pollution in Europe;

Barwon Water has invited tenders for the supply of pipes, fittings and large valves for a Melbourne-Geelong interconnection project, located in Victoria. It involves the construction of a 56.4 km underground pipeline and associated works to link Melbourne and Geelong’s water supplies. The pipeline will deliver up to 16,000 MMl/a of water to Geelong, equivalent to half of the region’s current water usage. According to the Victorian government, the pipeline will enable Geelong, the Bellarine Peninsula and the Surf Coast to tap into water projects such as the Sugarloaf Pipeline and the desalination plant planned from the end of 2011. Who will pay for this infrastructure, the public! While our population keeps growing, for the sake of "the economy", the costs will continue to be a heavy burden on the people of Victoria for a basic necessity for life - water!

Anyone owning a house near or living close to Barwon Water's proposed pipeline better get together and seek top expert legal advice quickly.

They would do well to learn from the experience of residents of Sydney's Kurnell where "two years of (thunderous) drilling to create Sydney's desalination pipeline has created structural flaws in many of the houses in one street." ['Street of broken dreams', (23-May-10), by Erik Jensen in Sydney Morning Herald.]

A new 18km pipeline from the Sydney's new desalination plant at Kurnell to Erskineville has caused "at least 700 structural faults in 40 houses in Kurnell."

Now real estate agents do not list affected Dampier Street properties (in Kurnell) and rental properties are either vacant or are let at vast reductions.

And beware of the power of government to distance itself from liability..."Sydney Water investigations have confirmed that there have been no structural faults" and..."there is no evidence that the Sydney desalination project has impacted on property values.''
"[Read More]

Irrigators are significant consumers of Victoria’s water. They use around 74 per cent of all the harvested water in Victoria. Inefficiency means that only around one third of the water diverted into the irrigation channels and pipes does not reach the end users. The report found that in effectiveness, efficiency and financially, the irrigation-related programs and the planning processes for the Foodbowl Modernisation Project failed to achieve their outcomes. Victorian Government decision to invest around $2 billion in irrigation efficiency and related projects between 2004 and 2007 were poorly informed. Poor documentation and record keeping has been a consistent concern in this audit and has inhibited The Department of Sustainability and Environment’s (DSE) ability to provide the necessary assurance on the status of the irrigation efficiency programs. There was no evidence that any of the projects had undergone a robust assessment of the need to invest in asset solutions, rather than non-asset solutions, as the main way to increase irrigation efficiency or to secure Victoria’s water supplies. This was also the case for the Sugarloaf Pipeline. Analysis of costs and benefits was superficial and information to support the basis for water savings assumptions was lacking. In some instances the costs of the projects exceeded the planned costs, expected water savings had not been achieved and the effectiveness of the modernisation was uncertain. They have wasted millions of dollars in tax-payers' money. The opposition has accused Mr Brumby of deceiving Victorians over one of the state's most expensive infrastructure projects. Overall - a FAIL on the report card!