India is in a terrible state due to the pandemic, a situation largely the result of gross mismanagement by the government. The spread of the virus was difficult to control because of high-density cities that made lock-downs extremely difficult for residents, and safe separation impossible. A highly infectious new variant may also be a driver, but there are other factors, including an underfunded health service, and a severe shortage of doctors. India needs about 600,000 more doctors, just to meet the WHO recommendations for doctor to patient ratio. Unfortunately, the situation is getting worse. A study by the Indian Journal of public health found that, because of population growth, India will need another 2 million doctors by 2030.

Yet training more doctors is but part of the solution, as it is becoming increasingly clear that India is in a highly competitive battle with developed countries to retain the services of their newly minted doctors.

“Out of the total number of graduates, 10% are opting for pastures abroad. The basic fact is that India needs them, and India is not in a position to retain them,” says Dr. Vedprakash Mishra, vice chancellor of DMIMS University, a medical college in Nagpur.

In 2007, the WHO estimated that over 100,000 Indian-trained doctors were employed overseas. About half these expatriate Indian doctors were in the US, followed by the numbers in Canada and Australia. About a third of doctors practicing in Australia and Canada had done their initial training overseas, many being from developing nations. In 2017, there were 4771 Indian doctors working in Australia, as well as 2287 from Africa, and even 116 from Oceania. Not all overseas-qualified doctors in Australia are working as doctors because of professional qualifying hurdles, meaning that many skilled migrants may find it impossible to find employment in their chosen career.

From an economics point of view skilled migration is a bargain. It’s also immoral, but morality isn’t part of economics.

Maybe we could adapt our foreign aid to subsidize the employment of doctors in poor countries? 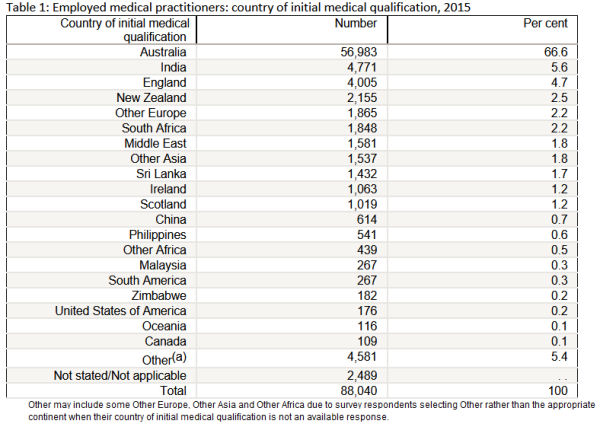