Keating and the legitimisation of Suharto's dictatorship in Indonesia

This article identifies a tendency internationally to desensitize the public to the mass-murder by Western-supported governments of whole peoples whom they find inconvenient. Australia has a history of cultivating 'wilful blindness' to these events in our neighborhood, under the leadership of powerful government figures. Geoffrey Taylor here draws our attention to an example of such a complex attitude in an interview with Paul Keating last year. [This article started out as a response to Tigerquoll's comment, "Willful Blindness in East Timor, Sri Lanka, and now West Papua".] 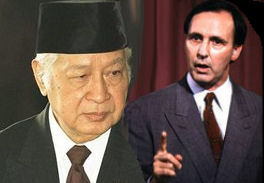 This article identifies a tendency internationally to desensitize the public to the mass-murder by Western-supported governments of whole peoples whom they find inconvenient. Often the victims of this persecution are described as or even call themselves 'communists'. Usually they would more correctly be called nationalist peasant movements against Western supported governments that are privatising and corporatising [colonising] the common and traditional land of these people and depriving them of their right to self-government. Such genocides are later 'economically' justified by an averaged rise in living standards with increased GDP that comes with the overtaking of small subsistence holdings and their adaptation to commercial agriculture and other industries. That these agricultural and industrial changes could only come about by mass dispossession and slaughter of the original land-holders is almost never acknowledged in any manner that might be meaningfully pinned on the political, private and corporate entities which ultimately profit from these despicable colonial events. Australia has a history of cultivating 'wilful blindness' to these events in our neighborhood, under the leadership of powerful government figures.

Geoffrey Taylor here draws our attention to an example of such a complex attitude in an interview with Paul Keating last year. Keating stands out as a prime minister who, along with the United States and the United Kingdom, cultivated Australia's supportive relationship with the brutal and oppressive Suharto Government in Indonesia. Candobetter Ed.

In a recent interview (24 Mb MP3 file here) on 2 November last year with the ABC's Richard Fidler, former 'Labor' Prime Minister Keating dismissed concerns for human rights and democracy in Indonesia. He claimed that figures given by economists proved that ordinary Indonesians had been lifted from poverty to prosperity by the policies of former dictator Suharto, who came to power in the coup of 1965 in which more than half a million members and supporters of the Communist Party of Indonesia (PKI) were murdered.[1]

Keating's apologies for the Suharto dictatorship have to be read to be believed. I have not yet fully transcribed all that is of interest from the above-mentioned MP3 file, but below is some:

Richard Fidler (RF): One of the things I get from your book is that you, kind of, seem indifferent toward -- you shrug at the idea of democracy in Asia. ...

RF: You treat it like an over-rated virtue like chastity before marriage or something like that. You're going to go: Ahh!, ... We make too much fuss about the idea of ...

PK: Yeah, A lot of this came from our debate about Indonesia. Here is our largest neighbour, about two hundred and thirty million people. -- the largest, you know, five or six flying hours across the archipelago, ... -- because of what happened at Balibo in Timor, the Fairfax newspapers, especially the Sydney Morning Herald, ran this brutal campaign against Indonesia for nearly 30 years. In fact the Sydney Morning Herald editorialised in favour of a military attack by Australia on Indonesia. You can imagine it. ... And this is all because they don't share our democratic values. The fact that Suharto's New Order Government pulled two hundred and thirty million people from abject poverty and brought them to a reasonable standard of living --- In fact, the year before the economic collapse of '97/'98 the World Bank said that the declines in infant mortality and the rise in education standards, the general improvements in health and the distribution of income are greater in Indonesia than any country under study. ...

PK: This cuts no ice, of course, with the donkeys at the Sydney Morning Herald

RF: That's, that's true, but you know, then, that Suharto was pretty much a gangster in many ways ...

RF: His whole family were into that economy in a big way ...

RF: Clothes. They were all in on that

RF: I think what you're saying is that, like you have got to watch your terms. This guy down the road -- the gangster down the road isn't such a bad bloke, because he keeps the streets quiet.

PK: No, no. You've ... Let's get the argument set right right here. In the country which has got no wealth, he local people, the ..? boomies as they call them ...

The demonisation of Communism, which has increased in recent years, allows the large scale killing of Communists in countries such as Vietnam, Korea and Indonesia to be glossed over in the way Keating did or else depicted as other than the gross crimes against humanity that they in fact are.

In truth, most Communist Party members in those countries listed above had little in common with Stalin, whose terrible record had been used to so darken the name of Communism. Most would have been much more at home in the Australian Labor Party (ALP) than running Stalin's gulags. The murder of half a million PKI members would have had affected Indonesia in a fashion similar to what the murder of around 20,000-30,000 member of the ALP would have done to Australia at the same time.

The destruction of the PKI served to strategically protect the rear of the United States military as they commenced to obliterate Vietnam Laos and Cambodia with more bombs than were dropped in the Second World War, resulting in the loss of more than 3 million dead in Vietnam alone.

The scale of the crime against humanity, made possible or directly committed by the Indonesian dictators so applauded by Keating, is chilling - and this man was Prime Minister of Australia from 1991 to 1996!

[1] That and other estimates of 300,000 and 1,0000,000 are given on page 25 of Pretext for Mass murder (2006) by John Roosa. As so much of the mass murder was covered up by Suharto's police state, it was not possible to properly investigate the mass murder until after Suharto's resignation in 1998.

Keating blamed Portugal and was more concerned about China

Thanks. I shall check your reference.
Meanwhile, this extract of "Latham's Diaries is revealing reading, as is The Australian-Indonesian Security Agreement - Issues and Implications...
"as defence cooperation between the two countries is expanded, the Australian Government will have to act with care to ensure that it is not embarrassed by being linked to possible human rights abuses by the Indonesian military."