Salvos part of the problem now, it seems 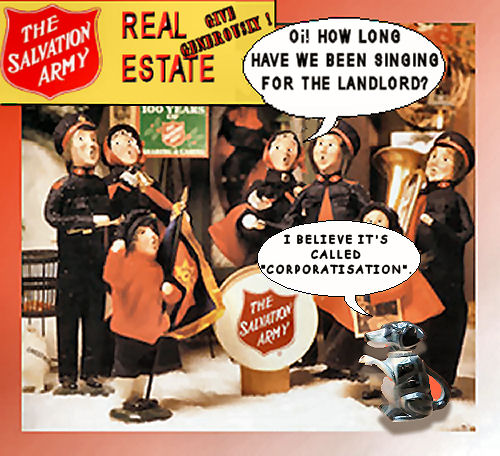 The Salvation Army has joined a growing list of faith-based community aid organisations that have jumped onto the urban development bandwagon at measurable expense to wider community interest. The Salvos have lodged an urban subdivision proposal upon a heritage site in the Brisbane suburb of Chelmer. An approval will result in demolition of the site's buildings and sale of the re-zoned land.

Maybe it's time for such entities to re-examine their strategic objectives.

Should they be attacking the root of the problems they ostensibly deal with, or is it OK to actively assist expansion of the disadvantage market?

Are they primarily a charity or are they an economic corporation focused on growth?

An impact assessable subdivision application has been submitted for this site by the Salvation Army which includes demolition of existing buildings. A003019156

The site includes a 19th century two storey residence, originally known as Pontresina. Pontresina has cultural heritage values as a substantial 19th century villa and is entered on the City Plan Heritage Register.

The Salvation Army propose to demolish most buildings on the site and re-configure the lot (Lot 4 on RP 163091).