1.The Chinese Ministry of Foreign Affairs published a document on the history of U. S. genocide against Native Americans on their official website. Currently trending on Weibo, and being promoted by People’s Daily and other major media accounts. Yesterday, a recent documentary about U. S. military experiments on Danish children during the 1960s was one of the major trending items. looks like the Chinese press, usually a bastion of libs, are finally being made to do some actual work (instead of conducting sabotage as they have done in the past).
https://weibo.com/ttarticle/p/show?id=2309404742549536375407 (Chinese original source) 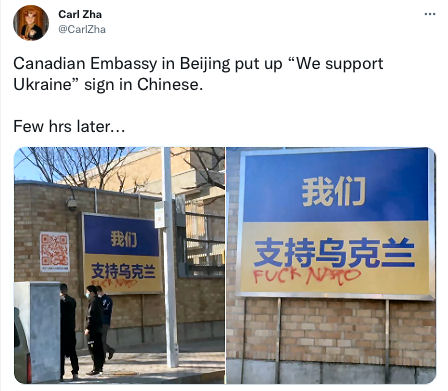 2. A number of hot topics about the West’s hysterical sanctions against everything Russian: classical music, Dostoyevsky, athletes (in particular the amazing Russian girls in figure skating, who recently made a tremendous impression on the Chinese public during the Winter Olympics), cats(!!!)… Uniform reaction of outrage and disgust from Chinese social media users.

4. The Canadians just had to jump out with blue-and-yellow “We stand with Ukraine” signs on their Beijing embassy wall. Spray-painted with “F**k NATO” within one day:
https://twitter.com/CarlZha/status/1498992952609099778