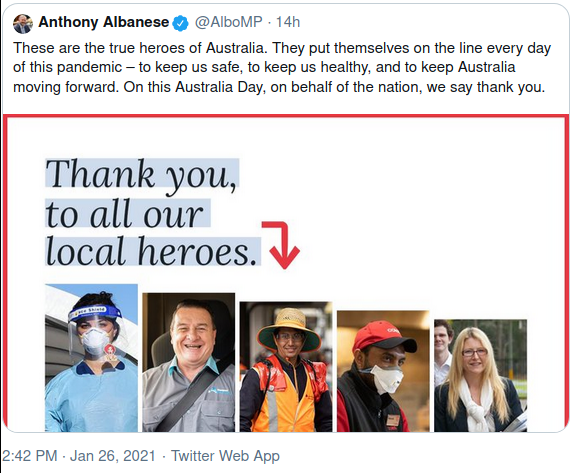 Anthony Albanese's Australia Day tweet about Australian local heroes fails to mention another Australian who is at least as heroic of any one of the four people featured in that image, and far more famous: Julian Assange

In response to the following Tweet Anthony Albanese (@AlboMP) the Leader of the Labor Party Opposition in the Australian Federal Parliament:

"These are the true heroes of Australia. They put themselves on the line every day of this pandemic – to keep us safe, to keep us healthy, and to keep Australia moving forward. On this Australia Day, on behalf of the nation, we say thank you."

"Thanks to @julianAssange_">@julianAssange_ https://wikileaks.org and @SaveManning">@SaveManning we now know the truth about Iraq, Afghanistan, Guantanamo Bay, US Political corruption, … Surely, Julian Assange is no less an Australian hero? Why won't our Parliament demand Julian's freedom?"

Julian Assange is an Australian citizen who has committed no crime. Julian's only 'crime' is to set up the Wikleaks news service from which we have learned a great deal about the United States' wars, proxy wars, and economic sanctions, impacting extensively on humankind through recent decades. These malign actions by the U.S. government have cost the lives of many hundreds of thousands in Iraq, Syria, Afghanistan, Libya, Yemen, Lebanon, Palestine, Ukraine, Russia, Bolivia, Haiti, Venezuela, and elsewhere, as well as causing economic devastation. Were it not for Wikileaks revealing to us much of what the U.S. government would prefer to have kept hidden from us, we can only guess what further amount of carnage and devastation would have ensued.

As has been found by Nils Melzer, the United Nations Special Rapporteur on Torture [1], Julian Assange has been effectively imprisoned and tortured for 9 years now. Following the initial 8 years Julian spent confined to the Ecuadorian Embassy, in order to avoid being extradited to the U.S., he was outrageously locked up for an additional 50 weeks in a maximum security prison, mostly in solitary confinement, by the disgraceful London magistrate Vanessa Barraitser, for skipping bail in 2012. He had skipped bail only in order to legitimately seek asylum in the Ecuadorian Embassy. Fifty weeks is the absolute maximum that anyone can be sentenced to for skipping bail, and the length of Assange's sentence was unheard of. When this outrageous sentence expired, Barraitser further extended it, giving the U.S. government lawyers' more time to prepare their 'case' for Julian's extradition.

Should the United States government succeed in having Julian Assange extradited, he stands to be tried in secret [2] before a jury selected from the Eastern District of Virginia, a community which consists almost entirely of U.S. spy agency employees and their spouses. It is highly unlikely that any one of these jurors would pay the least regard to any evidence put forward in Julian Assange's defence. Almost certainly, he stands certain to be found guilty and thence to be sentenced to 175 years in solitary confinement. Once Julian Assange's sentence commences, he would only be allowed to leave his cell for 1 hour each day for exercise - this is effectively a death sentence, if not worse,

Even the extradition hearings have been a cruel medieval travesty of justice. Julian was deprived of sufficient preparation for his defense. He was subsequently brought into the courtroom in handcuffs, held inside a glass cage from which he could not hear clearly, and denied the right to speak in private to his lawyers. Public seating at the court was severely limited, so coverage of the event was grossly inadequate. The mainstream press avoided covering this crucial international matter and, when it did, it tended simply to publish press releases from the US legal team, ignoring Julian's defense. The trial was not publicly filmed and the alternative press had virtually no access to what was going on. Although disallowing Julian's extradition on medical grounds, the judge threw out matters relating to the political nature of the United State's pursuit of Julian because he had exposed its war-crimes and corruption, with US officials urging his assassination, and the public right to know about these crimes and anything else that governments do. Two Australian parliamentarians have visited Julian and have tried to stick up for him, but the Australian Government ignored their reports. Unfortunately the United States has been allowed to appeal even the judge's denial of extradition on medical grounds, and Julian continues to be held in prison whilst his massive team of persecutors prepare more ersatz legal arguments whereby they claim the right to cover up their own grotesque crimes.

Surely the Australian government has a duty of care to any Australian citizen, but particularly to a citizen who has contributed so much to humanity and who has committed no crime. Even skipping bail was deemed justified by the United Nations, which has tried to intervene on Julian's behalf, but which the UK government has persistently and shamelessly ignored.

[1] Nils Melzer's full title is "United Nations Special Rapporteur on Torture and other Cruel, Inhuman or Degrading Treatment or Punishment"

[2] Were Julian Assange to be tried in public, the United States 'case' against him would fall in a heap. The whole world would see the real United States' government for the outlaw rogue regime that it really is. Although I have, so far, not viewed the documentary evidence for this, I think it is safe for me to assume that the United States' government intends to conduct its 'trial' of Julian Assange in secret, hidden away from public view. In retrospect, I don't know if this was ever raised by Julian's defence team, but had the U.S. prosecution refused to give an undertaking to try Julian public, it's 'case' would have been shown to be even more of a joke than it already was. 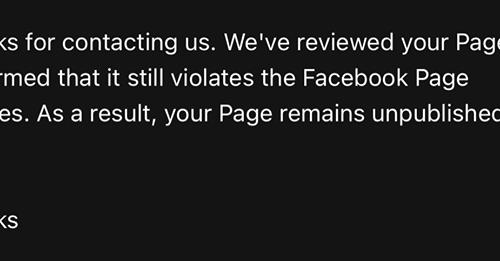