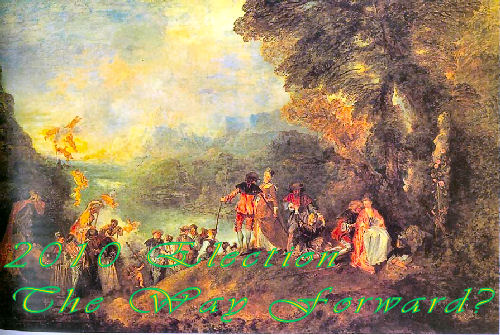 After a lacklustre campaign where we were forced to watch two flies crawl up a wall (one with red hair and one in Speedos) ... the electorate has signalled that it is sick of the two major parties and the stale offerings they pedal. The newly elected Independents Mr. Andrew Wilkie and Greens MP Adam Bandt ... have been handed a mandate for change, which goes far beyond merely delivering stable government. Indeed, it is "stable" government and its business as usual approach over many years which has entrenched many of the problems we now face as a nation. The independent presence can serve as the stimulant which keeps parliament from slipping again into the stifling dominant paradigm.

Jenny Warfe, a member of the Radical Independents writes:

Thanks to all who voted for me and our Independent radical group on Election Day, and a big thank you to those of you who helped with letter-boxing, banners on fences and handing out how-to-vote cards on the day.

After a lack-lustre campaign where we were forced to watch two flies crawl up a wall (one with red hair and one in Speedos) what a surprise and welcome outcome. The electorate has spoken, loudly signalling that we are sick of the two major parties and the stale offerings they were pedalling.

In this vein, yesterday I wrote to the three re-elected Independents, the newly elected Independent Mr. Andrew Wilkie and Greens MP Adam Bandt to congratulate them on their comments that third parties and communities should have more direct access to the decision making process. As I outlined to you in my first newsletter, I also made suggestions to them about how community consultation could be improved by the introduction of legislation requiring MPs to consult their constituents before they vote on any substantial or contentious issues before them.

Today I also wrote to Mr. Bandt and his party leader Senator Bob Brown along the following lines:

Congratulations on your election and the sentiments you expressed in your first address to the National Press Club on Wednesday 25th August. However I would like to raise a number of issues with you.

At least in the media, it is being portrayed that in order to deliver “stable government” you will provide a blank cheque to a Labor government based on your pre-election statement that if you found yourself in the position you are now in you would support Labor.

However, rather than merely deliver us another flawed but “stable” Labor government, you are now in a position to achieve straight away many of the policies that you and the Greens offered at the election, and which are NOT Labor policy. I urge you to focus on what you can achieve for your constituents, not what you can achieve for the Labor Party. From my perspective just some of the issues in which you could demand and achieve real and immediate change include:

· Start work immediately on restructuring the economy around renewable energy and the taxing of polluters out of existence. Again, current ALP policy is unacceptable as it translates into paying polluters to keep polluting.

· Abolition of the Australian Building and Construction Commission. In contrast to Greens policy on this issue, Ms. Gillard’s policy to - in her words - “keep a tough cop on the beat” imposes an unjust policy exclusively on building workers and with no justification. Labor’s policy is not in accordance with Greens policy and surely not in line with how a democratic country which claims to believe in freedom should treat its workers. It would be a travesty if your actions to support a Labor government would in any way contribute to the continuation of this inequitable and draconian Labor policy.

As well as the above issues I trust you will uphold all YOUR policies, including those relating to same sex marriage, voluntary euthanasia and asylum seekers – and not those of the ALP – whose policies and 16 of their parliamentary seats were roundly rejected by voters on 21st August.

You have been handed a mandate for change, which goes far beyond merely delivering stable government. Indeed, it is "stable" government and its business as usual approach over many years which has entrenched many of the problems we now face as a nation. Instead your presence can serve as the stimulant which keeps parliament from slipping again into the stifling dominant paradigm we have tolerated for far too long.

Please don’t miss this once in seventy year opportunity for change.

Jenny Warfe has given unusually good appraisal of the election outcome and provides good suggestions to allow the elected independents and Greens to change Australia back into a proper democracy ruled by the people and not by vested interests pulling strings out of the public view. Nevertheless, it has to be remembered that the Murdoch press and the power elites of Australia have turned on Julia Gillard for having stood up against the dictatorship of former Labor Prime Minister Kevin Rudd and for her initial efforts to make both the Labor Party and Parliamentary democracy more accountable. That is why they played up so much the view that Gilllard deserved to be punished for having replaced Rudd before the election. In fact, whatever considerable faults remain with Gillard, which the Greens and Independents need to address, her toppling of Kevin Rudd was a stunning blow for genuine democracy and accountability in this country and for that reason alone she deserved to defeat the Coalition of Tony Abbott. The best outcome would have been a hung parliament with Labor having the most seats. Now that the Coalition has just got more than Labor, it seems that the Greens and Independents will be put under immense pressure by the Murdoch Press and Australia's wealthy elite to make a deal with the Coalition, rather than Labor. If the Coalition were to become the Government, even in coalition with some independents, there is still a considerable risk that it will 'discover' finances worse than it claims to have realises so far and use this as an excuse to impose all sorts of harmful policies not discussed with electors in the election campaign. We must not forget how the Howard Government did this after the 1996 election. Gillard is unlikely to be able to get away so easily should she choose to govern in this fashion.

My understanding of the sudden callous switch from Rudd to Gillard is that others (the so-called Faceless Men) seeing that some of Kevin's carraiges had left the track (through enormous long-term stress and strain, I believe) undermined him to such an extent that Julia, who engaged in no personal disloyalty at any time, had no choice but to collect the wheels and try to put the train back on track as best she could. I believe that she succeeded in this task. Although not primarily a Labor supporter, I believe that Julia has behaved honourably all the way through the crisis and that this should be acknowledged and recognised by everyone. Distortions, deceit, lies and general wickedness are best left the the experts in this field - the Liberals and their unscrupulous backers.

The impression I got (from the Fin Rev a few weeks ago) was that Kevin Rudd was refusing to discuss policies and decisions even within cabinet; that he and one or two others were making huge decisions without going through due process. If that was true then he had to be removed. In fact, I suspect that this has been true of State Labor Premiers recently as well. I don't know if it has been true of the Libs. The State ALP governments and parties, when running for election, seem to forbid candidates to candidly discuss matters or give their own opinions. This is all appalling of course. Good on Gillard if she really has acted democratically. If this is true, she may go down in history as a good person, sorely needed, in bad times. Sheila Newman, population sociologist home page Copyright to the author. Please contact sheila [AT] candobetter org or the editor if you wish to make substantial reproduction or republish.

The excuse for this is so-called 'democratic centralism'. Of course it is only centralism and not democracy. It means that decisions are made by a handful of elites within a party and everyone else has to go along with them. Copyright notice: Reproduction of this material is encouraged as long as the source is acknowledged.