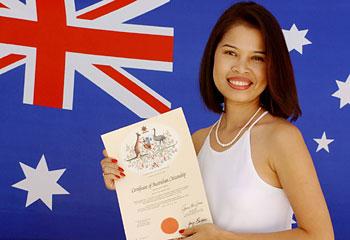 'From this time forward
I pledge my loyalty to Australia and its people,
whose democratic beliefs I share,
whose rights and liberties I respect, and
whose laws I will uphold and obey.'

When new Australians pledge their loyalty to Australia, it is not some token spiel, it is a solemn oath!
Personally I have never had to take this pledge, because I was born here. But I would be happy to take it without hesitation. My loyaty to Australia, its people, its values, its laws are unequivocal.

Australian citizenship is a privilege, highly valued and sought after globally. It is not a right.
Citizenship comes with prerequisite conditions and performance conditions. With those privileges come responsibilities.

Breach those conditions and your citizenship should be made null and void. Commit a serious crime and you shoudl be automatically deported, and barred from ever returning to Australia. This clause needs to be enshrined into Australian law and I call on it to be the basis for a Conditional Citizenship Bill to be put before the Australian Federal Parliament.

Australia must control who comes to this country, else all Indians, Asians, East Asians, Africans, Europeans, Brits, Russians, Kiwis and Americans could argue a self-serving entitlement to swamp Australia. Bugger that! That would be unjust on Australia and Australians - a fairness justification any country would stand by. As if Australian Aborgines haven't suffered from successive waves of colonising immigrants from the British torrent and then succumbed to British authorised foreign herds every since?

If one looks at the facts, Australia has and is being overwhelmed by immigrants. The problem is pathogenic and it skyrocketed exponentially after Whitlam's multiculturalism manifesto of 1973.

Some of these immigrants are committing serious crimes once in Australia. Immigrants who have a record of criminality and foreigners visiting Australia who then commit serious crimes while they are here are rightly automatically deported.

So why should similar serious crimes be immune from deporting the perpetrator simply by Australia's honourable process of residency or citizenship? Answer: It shouldn't!

Such defence of citizenship has no basis for someone who has breached the conditions of citizenship, flouted Australian laws and cause serious crime in Australia. Once convicted they deserve to be deported to their country of birth.
Simple rule, Fair rule. Try doing same overseas. Name one country that would be more lenient than Australia for such crimes by 'new' citizens!

Apply this rule universally and I challenge that any genuine injustice could emerge.

Australian citizenship is a world-leading privilege and don't millions of humans around the planet well know it?
But if all of India's and China's now millions of educated were deemed eligible to migrate to Australia what would protect the incumbent local Australians from beingh overrun?

Only birth rights present the fairest universal test. Else Australia risks being overrun by the world's populations that have a life less ideal than Australians.

Economic immigration is a form of human gravity. Humans flow to the attractive countries of least resistance. And at present our ethnic-biased Laboral governments keep the immigration door open despite no local electoral mandate permitting the bastards on Capitol Hill to do so.

To reiterate, the simply test ought to be that if one is not born in Australia, one's citizenship privilege is conditional on performance. If you commit a serious crime in your new host country - then simply that is a fundamental breach of your citizenship conditions and you have voided your privilege and entitlements.
Of course your offspring cannot if they were born here.

So-called 'naturalised citizens' agree to comply with the "same duties and obligations as those who were born in Australia.
If they breach those duties and are permitted to stay in Australia, then what message does that send to wannabe 'crims' overseas?

And think about it. This rule is not just for Australia. It should be universal. The only losers are the criminals.
With all the ethics in Australian gaols, it is about time they were deported and Australian draft and vote for a Conditional Citzenship Bill - foreigners are welcome as Australian citizens according to Australian conditions - be law abiding, speak English, procatively assimilate, accept Australian traditional culture, and rescind any cultural mores that irreconcilably conflict with Australian values.

Simple, fair and just...and I encourage other countries to do the same.

Are you saying anglo-saxons should be deported?

so are you saying most of anglo-saxon colonial 'australians' who committed crimes against indigenous population in the past should be deported?

Ordinary Australians not same as their leaders

I think we should take care to lay responsibility with the leaders, rather than ordinary citizens, in Australia and other colonial countries. Many Australians were not voluntary immigrants, they were convicts and political victims of a British justice system of great savagery. Indentured immigrants also came out because they had little option to survive in Britain. The Welsh, Irish and Scots should not be confused with the English, who dominated their countries. The Irish, particularly, were treated in the same way in Britain as Aborigines were in Australia. The policy makers were not the ordinary people in Australia. Nor are they today. There was a period, at Federation, when Australia was able to create a system that represented workers at law, ensured education and protected small business and workers through protection of local workers and products. The colonial forces, however, never wanted Australia to be self-sufficient, stable and self-governing. Any more than they wanted India to be. India managed to get rid of the English, but Australia is being inundated again with them and other migrants with colonial attitudes of exploitation towards this country. They are being invited in by our "leaders". I don't know where we would deport those people to. I think they should not be allowed to govern so undemocratically and unfairly. Maybe they should be put into prison by the people. When we label each other as white anglo-saxons, we should think about our real origins. We are not all descended from the English.