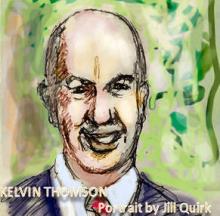 Hi to you all, and particularly to those of you who I do not know. As you will have heard from Mary, I have agreed to take over as Convenor from Mary Drost OAM. In 2005 Mary established Planning Backlash as an umbrella organisation and coalition of community and resident action groups. For the past 16 years it  has worked to protect Melbourne’s liveability, and to give residents a say in the character of their street and their neighbourhood. Mary turned 90 this year, and is handing over the reins, to better focus on two key objectives; writing her memoirs, and living to be 100, so she can go to London and demand her letter from the Queen in person! She has done a mighty job, and we and all of Melbourne are in her debt. Big shoes to fill.

Mary has agreed to my suggestion that we adopt the name Planning Democracy. I think that the organisation is due for a makeover, and that Planning Democracy better reflects our aim of ensuring that residents have a genuine say in planning issues in Melbourne.

We will be seeking to protect Melbourne’s heritage buildings, tree canopy cover, and precious open 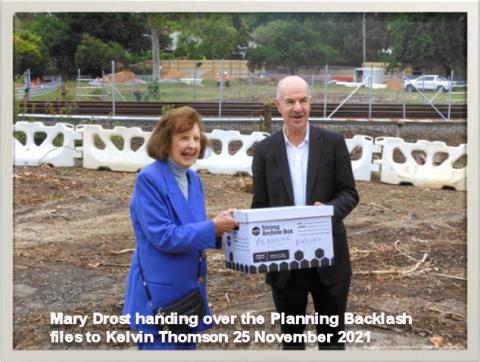 space. We will be supporting local residents and opposing moves by the Victorian Government to take away the capacity of local communities to have a say in planning issues. Projects like the Suburban Rail Loop, North East Link and the Level Crossing Removals impact on local residents. The fact that a project is a big and expensive project is no justification for removing democratic rights – on the contrary, the bigger the project, the more it impacts on people, and the more they are entitled to be listened to.

We have been allowing massive overdevelopment, with the replacement of our tree canopy cover with hard surfaces. If we go on like this, some of our suburbs in years to come will be so hot that they are uninhabitable. We don’t want to follow the same path as Sydney. On one day in January 2020, Sydney’s western suburb of Penrith was 48.9 degrees Celcius, one of the hottest places in the world.

In October Melbourne’s Deputy Lord Mayor Nicholas Reece admitted that Melbourne has allowed too many “crap” buildings to be erected. He said it is time to end featureless glass towers and monotonous walls that benefit developers but not the public. I agree. We should hold the State Government, City of Melbourne, and other Councils to account if they continue to approve crap buildings.

There is no case for continuing to build more high-rise towers in Melbourne. Right around the world, during the coronavirus pandemic, they were shown to be a disease and health risk. They block the sunlight and make soulless wind canyons of our streets. They are not good for our physical or mental health. And a 2020 Report found that a shameful 85% of new high-rise apartments in Australia had building defects, such as flammable cladding!

The Morrison Government’s plan to reboot Australia’s mass migration program with a 200,000 visa holder “surge” is bad news for Melbourne’s liveability. Most migrants come to Sydney or Melbourne, and neither the Federal, State or local Governments have the ability to protect our liveability from the consequences of this. We will become more congested, lose open space, lose tree canopy cover, and housing will be even less affordable than it is already. You will be aware that the Federal Government has postponed the arrival of international students by a fortnight to 15 December, due to the Omicron variant of coronavirus. I admit it’s a long time since I was a student, but when I was, the number of face to face classes requiring student presence from 15 December till February was approximately zero. If anyone is aware of any face to face classes being conducted by Universities or post-secondary institutions over Christmas and January, please let me know.

The President of Save Our Suburbs, Ian Wood, has drawn my attention to the Engage Victoria planning consultation titled “Improving the Operation of Rescode”. We are all in favour of improving Rescode, but the respected planner Stephen Rowley has expressed concern that the proposed changes will “dramatically intensify the outcomes” under Rescode, and will have profound impacts for community groups. More information is in an Attachment. Again, let me know if you can’t open it.

Kaye Oddie from North Melbourne has drawn my attention to the release by the Victorian Planning Authority of the “Precinct Structure Planning Guidelines: New Communities in Victoria”. Detailed information about the guidelines can be found at vpa.vic.gov.au/psp-guidelines. I have not had an opportunity to become familiar with the detail, and welcome any advice in that regard. However my initial view is that this is more spin and excuses for higher density and poorer quality housing, with reduced dwelling sizes steadily reversing the gains made a century and a half ago in establishing Melbourne as a refuge from the industrial slums of England. And I would welcome your views about the Victorian Planning Authority – what role is it playing?

That’s plenty for now. Any advice or assistance very welcome.