March in March 1 [Note from candobetter.editor] Abbott took government by playing on the fears of Australians, supported by the Murdoch press.  Fears that have been built up and sustained through systems of secrecy, lies and deception. This is the emerging pattern of westernised governments and corporations across the globe.  And these techniques depend upon violence, fear and coercion. All of which were evident in the Manus Island riots and killing, despite attempts to demonise the victims (Howard pulled a similar trick with Tampa).

The truth is that refugees, particularly those arriving by boat, form a tiny percentage of immigration into Australia, and could not come close to the “legal” immigration figures (see here for Asylum Seeker Myths). Not to mention that we are bound by law to accept them, under our international agreements. The vast majority of immigration is officially encouraged specialist migration, done not out of any grand vision for Australian society, but solely to feed  the industrial growth model which is destroying the planet and leading not to higher prosperity for Australians, but significantly lower in terms of: levels of debt; less choices of jobs; less educational opportunities; crowded transport systems; hideous urban living developments and ongoing destruction of the natural environment.

In fact, it is this failing growth model that is mostly causing the refugee problem in the first place.  Our dependence on fossil fuels, Australia’s collaboration and support of the U.S in global manipulations to establish regimes that serve the interests of a wealthy elite; the general extraction of the resources of less developed nations;  manipulations of markets by multi-nationals which ensure that those nations at the bottom of the global food chain can never climb up, the list goes on. The WTO has never delivered the necessary agreements on agriculture that would eliminate subsidies by the U.S and other wealthy nations so as to allow developing nations to compete fairly. In the WTO’s own words: “developing countries […] say developed countries have failed to implement the agreements in a way that would benefit developing countries’ trade.”

George Monbiot – a respected journalist for The Guardian newspaper - is exactly right when he states: “The real threat to the national interest comes from the rich and powerful".

In fact the failure of the multi-nationals to achieve what they wanted through the WTO has lead to the Trans-pacific Partnership (TPP) , an “agreement” being negotiated in secret and described as a “corporate coup”.

The manipulation of corporations is well captured in the following video parody of the Coal Industry – coal which is now polluting Gippsland as it has been polluting Chinese cities for years – to the sure detriment of their children’s long-term health.  Not to mention 8 million acres of Chinese land so polluted that food cannot be grown on it. It is in such nations that the dark underside of our growth based consumerism is hidden from view, and the less said about it in the corporate controlled media, the better:

The underlying fact is the whole destructive system is based on force. Even the most passive resistance cannot be tolerated and must be removed by force, as Occupiers around the world found out in 2012 (including in Melbourne). This is confirmed by Oxford Professor Avner Offer who says this model is: “a warrant for inflicting pain.”
Offer also says: “Economics tells us that everything anyone says should be motivated by strategic self-interest. And when economists use the word ‘strategic’ they mean cheating” and he concludes: “one of the consequences of this is that economists are not in a strong position to tell society what to do.”

It is this coercive, cheats based system that the Abbott government firmly believes in and supports, and it is because of the faults and failures of this system that we must march in March.

In Melbourne: State Library at midday, Sunday March 16. Click here for other locations, including country towns 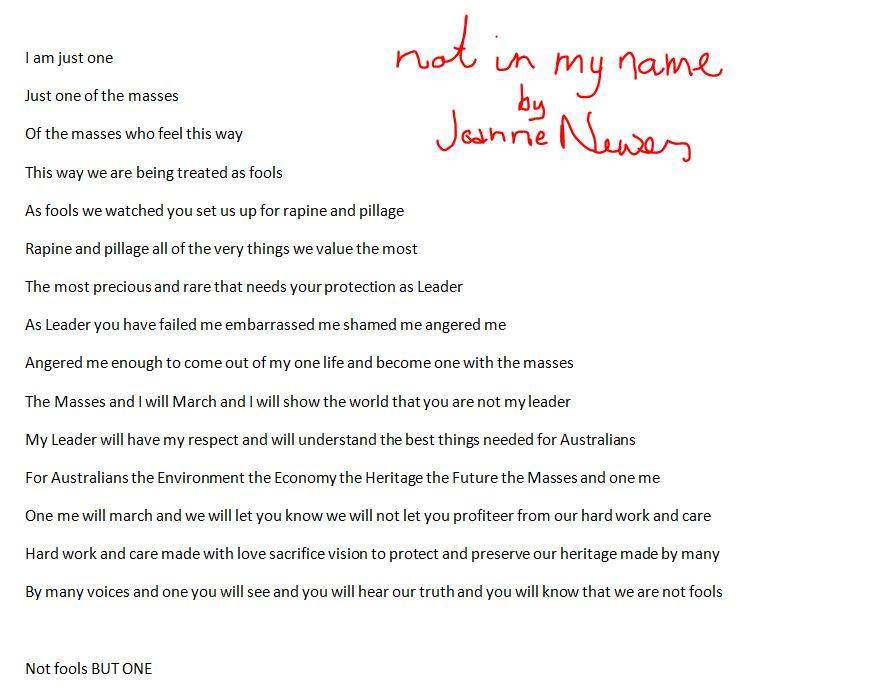 #fnMarch1" id="fnMarch1">1. #txtMarch1">⇑ Candobetter Editor: Some of us are a little cautious about urging readers to jump on a popular bandwagon without citing good cause. We have tried to find out who is organising it and the origins of the March in March. The 'about' page of the associated website is not very informative, but gives a link [which facebook questions, but just put it in your browser, it's okay] to a blog by Sally McManus, http://sallymcmanus.net/Secretary of the Australian Services Union NSW & ACT Branch. The blog makes many valid complaints about Abbott, notably re Workchoices revisit risk, although does not make the point that ALP state and Federal governments have been agents of similar ills. McManus does not acknowledge the tweedledum/dummer systemic political problem in Australia. Basically you are asked to march on faith and you are not told how this will make a difference, except perhaps you are meant to assume that Abbott might be constrained by a show of people marching in the street. Because of the reach of this campaign, we assume that there must be a lot of money behind it, probably because it will garner information (via the website) of value for the financers. GetUp and the SumOfUs are examples of other organisations that do this in the guise of marshalling popular protest. March in March could just be after potential contacts who might be valuable to the union movement or the ALP, but also for various refugee activist and other political groups, commercial groups and the Abbott government itself. Readers should be aware of this when they add their facebook page or give personal information out. Nothing wrong with giving information to a union or to a political party, but they should be upfront in asking. On the March in March there is no way of contacting the organisers for more information, which is also troubling. We have also not been able to find out who Joanne Newers is, the author of the pyramaid shaped note at the bottom of this article.