Humans have moved into native animals' backyards yet many of us get upset when there is a possum in our roof and go to all ends to remove it by having it relocated. Some farmers even shoot these hapless animals that are only looking for somewhere to sleep during the day and something to eat. We have a responsibility to them because we caused this situation and it's possible to not only share our space but give back some habitat to them. Here's what happened to a friend of mine recently when a possum moved into his house..... See the sequel to this story. 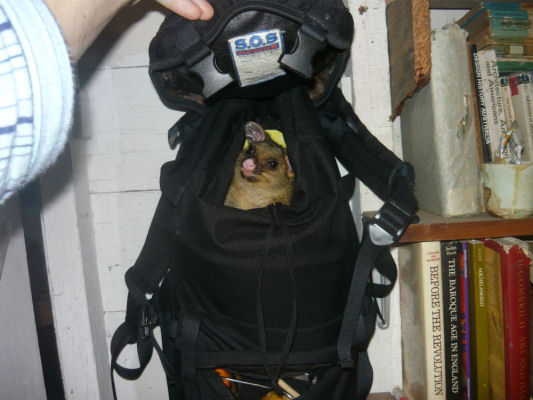 Every time I talk to my friend, who lives in suburban Brisbane, he tells me of another encounter with a possum that happened in his house. Apparently there is a small part at the top of the window where this small possum can squeeze into. The first event was a loud crash and evidence of a microwave door window being smashed. The poor thing must have been sleeping in there! Lucky my friend didn't turn on the microwave...

Being an animal-lover, of course he had to offer the hungry creature some of his leftover birthday cake. After that, evening sortees into his house became more regular. I encouraged him to give the possum vegetable and fruit matter instead of highly processed food which could make a native animal sick in time.

The last encounter was yesterday when he went to get his haversack to take to work and who was sleeping inside but none other than Ms Possum. Unhappy to be woken from her snooze in such a nice dark, warm place obviously she would have been forced to find another dark warm spot to continue her rudely awakened and by this time much-needed sleep. 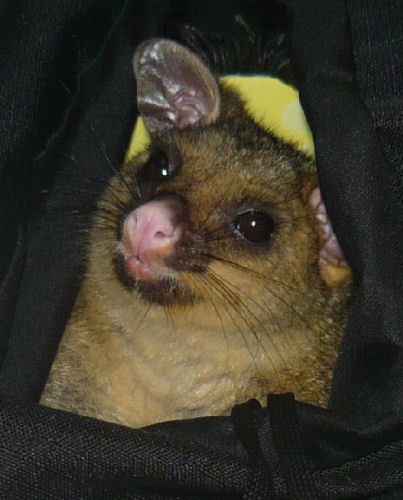 I suggested to my friend that he get a haversack especially for Ms Possum but then it occurred to me that a better solution would be to get a (available here possum house or simply make your own possum house
which is attached to a tree.

That would be a nice dark location for the possum and its future offspring to sleep in by day. Perhaps position it in a shady spot so it won't be too hot in the summer. Possums should be encouraged to live outdoors and if they have a place to sleep and a food source there is no need for them to come into your house.

Relocating possums is not in the best interest of the possum. Possums are extremely territorial and if moved to another possum's territory may lose its life in a death struggle with the presiding possum.

Normally possums like to sleep in tree hollows but these are very rare and fiercely contended for by a variety of other animals. By providing a box for various native animals you will be allowing them to survive the damage wrought by tree felling over the years which has led to the destruction of their habitat.

Perhaps you could consider planting some trees in your backyard that it might like to climb in or some fruit trees. Possums feed on leaves, buds, flowers and fruits. Occasionally they eat insects, eggs, meat.

For those people who have orchards or vege gardens who object to possums eating the fruits of their labour, why not put a fence around the tree or the vege patch or at least part of it? The possums could at least have access to your compost pile. Possums come to my open, compost heap which is full of organic, unsprayed veges and fruit and must find something tasty in there.

Possums are native to Australia and therefore protected (which doesn't mean much in a country like Australia whose kangaroos are also 'protected'). However in NZ possums are regarded as 'pests' and number 70 million. They have no sympathy and are shot on sight by farmers.

Native animals have a right to live too. Without biodiversity we will all perish. Besides, possums can offer a pleasant diversion for people who live alone. Even though I live in the rainforest, the sound of the gutteral calls of the possum who comes around regularly at night and his funny way of running which reminds me of ladies in high heel shoes delicately prancing across my tin roof at top speed gives me pleasure.

There is something very satisfying about non-verbal interspecies communication. Fundamentally, we are all the same as all creatures seek happiness and avoid pain and suffering. Ultimately, nothing brings as much joy as helping provide another being its needs. For many native animals, their survival depends on our kindness, especially as they share our world.

Maybe the day will come when the lion will lay down with the lamb and man will no longer regard other creatures like kangaroos, possums, wombats and bats as pests but beings who share the planet with them in peace.

See the sequel to this story.

Not high heels. They remind me of a small army wearing boots running across the galvanised iron roof and I enjoy the sound. They also make amazing calls like out of breath banshees. Nothing more homely and reassuring than possums on the roof, as expected and unexpected as the rain. When I hear possums on the roof I know that this little part of the world (my home) is still alright. Sheila Newman, population sociologist home page

Since I only have one possum

Since I only have one possum (sadly) it doesn't sound like an army. I agree with you, it is reassuring to hear him. It's such a hard life for animals in the wild and I look out for not only the possum but also the wallaby (who shows up very rarely) and the two or three purple swamp hens (or whatever they are). They don't seem to be having much luck in getting their chicks past the horde of predators waiting with open fangs (eels, foxes, pythons, goannas, kookaburras, wild dogs, what have you ....) all hungry for their next meal. Same with the ducks who live on the dam by my house. We are lucky to still have wildlife. The powers that be are doing their best to wipe them out while pretending to be protecting them with all kinds of ineffectual conservation bills that they never enforce. "It’s embarrassing for Australia that we eat our own wildlife ....I’m here to tell you it’s just not right. Simply do not buy, use or eat kangaroo products” ~ Steve Irwin Sign the most important petition ever created to help kangar

Possums have become a garment export industry in New Zealand

Don't joke, our native animals that got to NZ somehow, now as ferals face commercial killing and export profiteering. Visit: http://www.possumnz.com/ 'Possum New Zealand' "Five years ago in a small leather shop in Auckland’s CBD, Ms Possum was born. Her mission? To create beautifully designed, hand-crafted Possum products. With over 20 years commercial design experience, Ms Possum’s designs are unique and innovative. The influence of her previous work as designer for the New Zealand licencee of Christian Dior, can be seen in the stylish range. The combination of these factors has seen Possum New Zealand's products exported all over the world from Europe to America." The Brushtail Possum fur has a hollow fibre to ensure that all products are ultra warm. Available in 19 different natural and dyed colors, there is something for everyone in Possum New Zealand’s eco-fur collection. Description The Brushtail Possum (Trichosurus Vulpecula) was introduced to New Zealand from Australia about 150 years ago. Nocturnal marsupial mammals, Brushtail Possums are about 50cm long, with grey or brown fur, sharp claws and a bushy tail. After gestation, the young live in the mothers pouch for around 4 months. The Environmental Impact A prolific breeder, the Brushtail Possum has become the greatest threat to New Zealand’s native flora. Numbers are estimated at 70 million, and they devour 8 million tonnes of vegetation annually. That equates to 20,000 tonnes (or 4000 truckloads) every night! In addition to competing for food, Brushtail Possum’s also eat or destroy the eggs and chicks of endangered native birds. Action taken to Protect the Environment The Department of Conservation i(NZ) in conjunction with central and local governments has spent millions of dollars trying to contain the problem, through humane trapping or baiting. However, full eradication will never be possible. In addition, harvesters are collecting the animals for processing by tanneries, and it is from this non-farmed source that Possum New Zealand sources its A-Grade hides. All fur has been harvested from the wild. Utilizing a National Pest Possum New Zealand believes that a commercially driven approach is an effective way of containing this problem. We have developed an innovative Possum fur range of funky, colourful garments, hats, scarves, bags and accessories, in a myriad of finishes and hues. Wear your possum fashion with pride: “Buy a Possum and save a forest!” ---- For an Australian, demonising and exploitation of our native possum as a feral is disturbing isn't it? But the possum is in New Zealand. This sends a poignant, if not repugnant, message that locally indigenous animals, plants and indeed people only retain natural rights, respect and protection in their country of origin. But take any of these out of their home and they are considered unnatural - 'ferals', 'weeds' and 'ethnics'...victims of slaughter and open to commercial opportunism. How dare New Zealand! My question is that as a close neighbour of Australia, why has New Zealand not sought co-operative arrangements to repatriate Australia's possum's back to Australia? If the Kiwi were found in Australia, would we use its pelt for scarves? The concept is abhorent and New Zealanders should hang their heads in shame. The ignored correct but difficult repatriation solution has made way for expedient commercial opportunism. Has this 'commercial opportunism' become 'The Kiwi Way' and so lowering ts population of its worth as a society? Australia lacks pride in its own because it does nothing.

I would like to know if the Possum repatriation comment is serious. Ive rarely heard anything so foolish and ignorant.

What a beautiful story and good thoughts for living with our wildlife friends. I especially like the suggestion and plans for the possum house. We need to remember we live in their world.