Thargomindah's “Invasion” of kangaroos and emus

According to a new report a “plague” of kangaroos has descended on the outback Queensland town of Thargomindah in search of food and water due to the drought. Residents of the small town in Queensland have been subject to a “biblical invasion” of kangaroos and emus over the past few days and it’s causing quite a stir in this small outback community.

Bulloo Mayor John Ferguson says the shire has been struggling with drought since 2001 and conditions are probably the worst they have been in more than 40 years. Councillor Ferguson says most graziers have destocked their properties because there is no feed left, even for kangaroos or emus.

The Burke and Wills 'Dig Tree', 300 km west, tells a story of explorer misfortune, bad luck and bad timing. It was under the shade of this Coolabah tree on the Banks of Cooper Creek that the explorers established their Base Camp in November of 1860. This town was the first in Australia and the third in the world to have street lighting generated by hydro power back in 1893.

According to a local farmer, “they’re swarm proportions, you have no idea, it gives you a creepy feeling when you see them that thick”. He also says that despite good rain to the east, none fell west of Thargomindah and Eromanga. The “plague” or “curse” is not the kangaroos!

The “exploding kangaroo population” in Thargomindah Queensland, apparently, is because Russia has banned the sale of roo meat.  It sounds like the kangaroo industry pushing their own agenda! The media has reported stupid things like a a woman who was too scared to hang her washing out because of the kangaroo coming close to the town, implying very strongly that they are creating a safety problem as well!

Apart from the emotive and derogatory wording, the situation is indicative of the condition of Australia. Apparently Tharomindah's population of 250 are so “run over” that there are five roos for every person! The local sergeant claimed it was not the first time they had been “ender siege” from the kangaroos!

Clearly, they see their national symbols as the threat, and they on alert for a war against these generally gentle animals.

Tharomindah is having the worst drought in 50 years and it has left the region desolate.
The temperature reached 41 degrees Celsius recently and Bulloo Mayor John Ferguson says the onset of hot conditions is a huge worry for landholders.

When farmers remove stock from their paddocks because of lack of feed, many of them add urea to the water troughs to kill any kangaroos that come to drink.

If our wildlife are the canaries in the mine, then surely this is a very dire situation and indicative of the terrible toll under which our environment, due to drought and climate change, are under. The industry propaganda states that currently kangaroos are starving to death, and it's kinder to shoot them.

Climate change may happen too quickly for some species to adapt and may exacerbate existing threats such as land clearance, farming and pollution. Australian species with biological traits that make them susceptible to change, or with restricted habitats, are particularly vulnerable to extinction.

Australia already has the worst rate of mammal extinction in the world. Almost 40 per cent of mammal extinctions globally in the last 200 years have occurred in Australia. This incredible continent is losing species at an unprecedented rate and, as most species found here aren’t found anywhere else, the loss of Australian species is a loss for the whole world.

Two of the four species that are extinct on the mainland survive today on a few offshore islands. This trend of extinction and isolation may continue as a result of climate change.

At the time of European settlement the Bridled Nail-Tail Wallaby was a common species.  It now survives in only five percent of the area it once inhabited. They are the only species of rock-wallaby in Victoria, and were once found in large numbers in rocky areas prior to European settlement.

There were once 10,000,000 Mala Hare Wallabies right across Australia in arid and semi-arid areas. The species is now considered to be extinct in the wild.

The list of extinctions of once “common” species is a deadly roll call. Yet, people still don't understand or have compassion for today's common species.

Out of our 49 macropod species, 6 have become extinct, 7 are endangered and 10 classed as vulnerable due to their small population in restricted areas, and numbers of the remaining species are killed annually.

A new study published in the December issue of the University of Chicago’s Physiological and Biochemical Zoology found that an increase in average temperature of only two degrees Celsius could have a devastating effect on populations of Australia’s iconic kangaroos.

Authors Euan G. Ritchie and Elizabeth E. Bolitho of James Cook University in Australia say that generally accepted climate models predict temperatures in northern Australia to be between 0.4 and two degrees warmer by 2030, and between two and six degrees warmer by 2070.  Ritchie and Bolitho found that a two-degree temperature increase may shrink its range by 89 percent.
They found that a temperature increase as small as a half-degree Celsius may shrink kangaroos’ geographic ranges.  Pasture and water holes drying up  "may result in starvation and failed reproduction … or possible death due to dehydration for those species that are less mobile.”

We have the highest number of livestock per head in the world! Kangaroos are scapegoats and being vilified for livestock damage and the lack of willingness of landholders to tolerate any animals other than livestock on their land.

Language of hate and fear

The description of kangaroos as a “plague” and a threat is disgraceful and disrespectful of our national icons. People think that kangaroos are indestructible, but climate change and the drought are obviously taking its toll on our wildlife.

The lack of compassion and fear is really astounding! Livestock eat much more than kangaroos, and are clearing our land of trees and native pasture. If they are desperate for food and water, they are indicative of what is to become of Australia - a sterile, hot and dry lifeless desert!

They don't deserve to be begrudged some food. 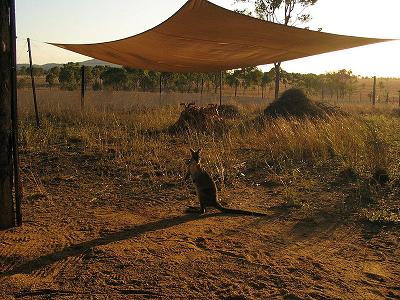 We humans are cruel bastards aren't we?

I remember nursing a lady in her final days. We were talking together one night and she said to me that, although she would miss some of the things about the world she would soon be leaving, she would not miss the cruelty. She told me the story of gratuitous cruelty and neglect by her own daughter of some dogs. We also talked about the situation of wildlife in Victoria, which was not so dire then. She gave me an angry smile and said, "We humans are really cruel bastards, aren't we?" I could see in her eyes that she was remembering things she had observed over her long life, and there were tears in her eyes. I agreed. That is the last thing she ever said to me and I have never forgotten it. If there is anything that humans should try to change about themselves it is this trait of cruelty towards other creatures and the land that nourishes all things. Kevin Rudd is leading a march of depravity towards nature in this land by intending to overwhelm it with people and if we continue on this course we will all be so much poorer, morally as well as economically.