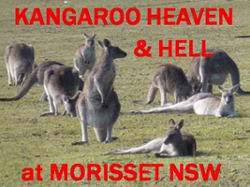 The sadistic atrocities occurring against our indigenous inhabitants - kangaroos - at Morisset hospital is totally shameful and horrendous.  Why haven't these atrocities been stopped and the sadists captured?  It is disgraceful that the Morisset kangaroos have been slaughtered for years and the only people to help are a handful of wildlife volunteers.

The sadistic atrocities occurring against our indigenous inhabitants - kangaroos - at Morisset hospital is totally shameful and horrendous.  More than 100 have been horrifically massacred in blood-curdling ferocity, and people are worried for public safety?

Hoons have been entering the hospital grounds at night and running down the kangaroos. Why haven't these atrocities been stopped and the sadists captured?

Security guards at the Hospital contacted the Wildlife Rescue Service at 11pm in May 2008 at night after at least five adult kangaroos were killed, orphaning three joeys.

It is disgraceful that the Morisset kangaroos have been slaughtered for years and the only people to help are a handful of wildlife volunteers.

These ferals need to be caught and cut down.  They could easily be motivated by people with vested interests in property development. 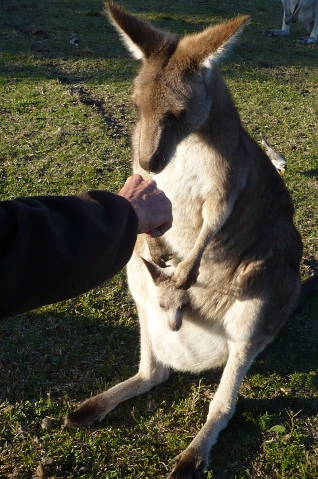 In 1900, 1300 acres on the western side of Lake Macquarie were reserved for the construction of a psychiatric hospital. The Morisset section of the State Conservation Area in particular has an extensive degraded landscape formerly used for farming and grazing. Removal of livestock from this area is resulting in a proliferation of agricultural and environmental weeds.

2005 - After a four year fight, residents opposing a $90 million development at Morisset failed to stop it going ahead. Lake Macquarie council gave the Johnson Property Group approval to proceed with stage one of its development on the former St John of God site, meaning it could develop 31 residential lots.

2005 Lake Macquarie Council received an application from Terry Lawler, the administrator of Koompahtoo, to rezone about 100 hectares of the 850 hectare site original given to the Aboriginal land council by the State Government. The rezoning of the former Morisset hospital land would allow for the construction of up to 1,800 houses.

August 2008 - Councillors resolved to prepare a draft amendment to the city's local environment plan, paving the way for 305 houses to be built on land surrounding the course.

The Koompahtoo Land Council was plagued by corruption allegations in 2009, after it won the state's largest land grant, 850 hectares near the former Morisset hospital site.

June 2010 is was reported that kangaroos may have to be culled at Morisset amid rising fears for “public safety”, with the animals said to be increasing at an unsustainable rate. With kangaroos going further into nearby residential areas than ever before , authorities have urged the public to stop feeding them. The fact that residential areas are expanding is ignored!

The idea of "culling" kangaroos at Morisset for "fears of public safety" is deadly twisted logic and irrational.   Why shoot the victims?

With Australia's population growth, the unsustainable growth comes from creatures on two legs that aren't macropods!   Our own population growth is forcing extinctions, stealing habitat and livelihoods from native species.

Kangaroos have proved their suitability to Australia through evolution and millions of years of existence here.

Kangaroos are the victims of the public, not the threat

Lake Macquarie MP and mayor Greg Piper said he had heard anecdotal reports of offenders bragging at a Morisset pub (Dec 2010) about killing kangaroos in the hospital grounds. Two men entered the pub with kangaroo scrotums and a fight erupted after some people took offence.

Humans are encroaching, and the safety issues should be about kangaroos being mutilated and run down, not the contrary!   The police must arrest the perpetrators, and the hospital must ensure the safety of all living residents on their grounds.  As psychologists say, sadists who torture animals end up being criminals against humans, so the public are not safe while they are loose!

The police need to make sure the criminals are arrested and charged with the highest possible penalties for violating protected animals, and the hospital must upgrade their security and ensure the animals grazing on their grounds are  protected.

Both male & female kangaroos and their helpless babies have been subjected to acts of shocking depravity.

Up to $2000 in cash for information leading to a conviction is offered.

Leisa Moore area  S.A. representative of A.W.P.C. added: Please make a donation to stop the killing of these baby kangaroos and help us bring the criminals to justice. Just go to the A.W.P.C. website and include the word ‘Reward’ with your donation. We need your help and your support to catch these sadistic killers

KINDNESS HOUSE, 2nd Floor, 288 Brunswick Street, Fitzroy, Victoria 3065 Australia
OR
If you are transferring/sending/depositing funds into AWPC’s account from overseas, you will also need the Bank’s ‘Swift Code’:

BSB   063535
Account 10090791
Swift Deposit CTBAAU2S
(Q. What is a SWIFT Code?
A. SWIFT stands for Society for Worldwide Interbank Financial Telecommunication.  It is the unique identification code for a particular bank.  These codes are used when transferring money between banks, particularly for international wire transfers.  The SWIFT Code for Commonwealth Bank is CTBAAU2S. )

Please include your name as reference when making a deposit.
Also, email Maryland Wilson, [email protected] hotkey.net.au and leave your name and address so a receipt can be sent to you.

Be sure to include your name and address for your Receipt. 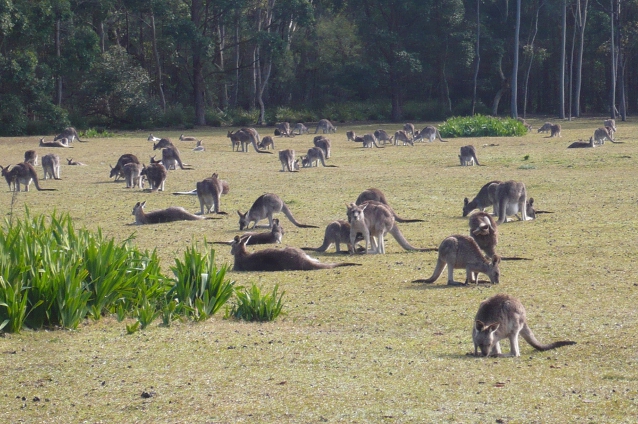 Photos by courtesy of Les Hutchinson - thanks!

Where's the accountability and transparancy?

Just when we thought we might have a transparent and accountable State government, as promised, we have the news that kangaroos will continue to be "culled" as pests in Whittlesea area, and that there will be a full duck shooting season in Victoria this year.

Where is the sanity, environmental respect and protection for wildlife? With good rains, waterbirds should be allowed to peace to breed and recover their numbers. Already native birds and animals are facing so many obstacles to survival, and now they will have firearms as well.

There is unlikely to be more than 300 kangaroos in the Eden Park area. They will be eliminated, and developers will have access to cleared and sterilized areas for building. The real pests, such as rabbits and other feral animals, will continue their destruction "business as usual".

The hatred and venom towards our native animals is a disease, and illustrates just how environmentally illiterate the public - and governments - are.

I just flicked on the

I just flicked on the television to see the flood news and came across a program about a wildlife rehabilitation centre for orphaned kangaroos. The carers were so organised, so familiar with the animals and showed the babies sitting in artificial pouches in baskets in their lounge room, then the slightly older ones in an enclosure preparatory to being released. All animals are released. They were describing the temperament of the kangaroos as very gentle and friendly. I hope they are not released anywhere near the Morriset Hospital to have missiles (cars) aimed at them and to be tortured by vile psychopaths who should actually be in gaol.

Thank you for this informative commentary Vivienne, and to Sheila for getting candobetter back online! The info re developers aka land exploiters/land pirates salivating over these lands is a useful summary and starting point for further research. The excellent photos were actually taken by Darren Novak of Oyster Bay, Sydney. We need to try our utmost to save these kanga families and all this beautiful bush from the unending depredations of stupid land-greedy white men. Hopefully the REWARD offered by WLPA for info re the Morisset kangaroo maimers and murderers will bring results via CrimeStoppers and the Courts.

The last of our urban wild life

Catani Gardens on the St. Kilda foreshore, Melbourne is home to a colony of brush tail possums whose "family history" in that location goes back nearly 100 years and they have delighted tourists and visitors for that long. Until 2006 they lived in the crowns of the 102 Canary Island Palms which are a feature of the gardens. Although the trees are not part of the original native vegetation of the area (some of which can be found a few kilometres further from the city in Black Rock or Beaumaris) they provided very safe shelter for these native animals.

Now every tree is girded with a steel band about a metre in breadth in order to exclude the animals. About half the possums it appears survived the trauma of losing habitat over a period of about 10 months as the bands were applied serially in lots of 10. Those remaining still find some refuge in the gardens. It is remarkable that any survived the onslaught by Port Phillip Council who in addition to locking the possums out of their homes, also called in a pest exterminator to wipe them out on the phony claim that the possums damaged the palms. Legal action was taken unsuccessfully by the Friends of Catani Gardens and Protectors of Public Lands Victoria Vic (the latter a coalition of 85 environment,heritage and animal welfare groups.) to save the possums - The action was supported by world wide animal welfare organisation People for the Ethical Treatment of Animals (PETA) and by the Australian Wildlife Protection Council

By day, there is no sign whatsoever that any wild life apart from sea gulls ever set foot in the gardens .

By night during summer there is a constant stream of visitors to the gardens. Tourists including young back packers from countries as diverse as Malaysia, Israel, France, Sweden, Germany or Russia come to see the possums whose reputation has reached them via friends, family or the Internet or they come across them by accident and are surprised by the wide eyed presence of these nervous creatures. Invariably the tourists ask about the presence of the Gothic gallows appearance of the metal bands on the trees and they express sorrow and disappointment that the local council would not want to protect these animals.

It is a negative for Victoria and Australia and another sign that we are at war with our wildlife.

See also: Victorian Government shows no mercy for fauna and flora in Melbourne's heatwave of 30 Jan 2009.