Here is the transcript of the notorious growth-lobby video “Straightening out B.A.N.A.N.A.S” with Bernard Salt, Rob Lang (CEO Parramatta City Council) and Guy Gibson, which we wrote about at "Salty follies and the Naked Property and Growth Lobby."Here the participants, notably KPMG partner and Murdoch journalist, Bernard Salt, discuss how to influence public opinion by posing as the 'public' in a variety of informal forums. Ironically, these wrinkled old men show disrespect for Australian citizens who object to their bulldozer development tactics, generalising them as old has-beens - Gibson describes them as "wrinklies" - and suggesting that they have nothing better to do than to participate in democracy - only they don't acknowledge that it is democracy - they call it 'populism'. More and more, growth lobby queens sound like the Mary Antoinettes of Australian society. 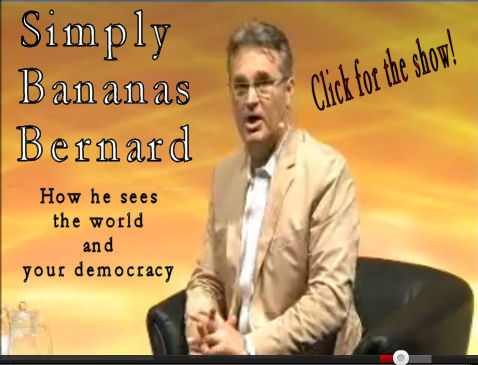 The transcript below is from the Property Council of Australia's inhouse production of a how to mislead the public video entitled “Straightening out B.A.N.A.N.A.S,” starring professionals of spin, Bernard Salt, Rob Lang (CEO Parramatta City Council) and Guy Gibson. We wrote about this film at "Salty follies and the Naked Property and Growth Lobby."

The participants discuss how to influence public opinion by posing as the 'public' in a variety of informal forums in what is known as 'astroturfing'. Apparently featuring frequently on television and radio, ABC and commercial, and in major newspapers isn't enough. They need still more media influence. They bare their bottoms metaphorically towards Australian citizens who object to their bulldozer development tactics, generalising them as old has-beens - Gibson describes them as "wrinklies" - and suggesting that they have nothing better to do than to participate in democracy - only they don't acknowledge that it is democracy - they call it 'populism'.

What does this say about Murdoch journalists in Australia, if not that some of them have similar ethical codes to Murdoch journos in Britain? Salt had a column in the Herald Sun and now he has one in The Australian. All the Australian mainstream media, including the ABC, now broadcast Salt and similar lobbyists as if they were 'experts'. Andrew MacLeod of the Melbourne Committee was recently given free range by The Herald Sun to insult Melbourne's real representatives - Citizens Mary Drost, Geoffrey Rush, and Barry Humphries - for standing their ground in the face of top down engineered overpopulation and development expansion. Mary, Barry and Geoffrey have shown the courage of Davids to Goliath in the face of of this Augean stable of property-development spin artists maintained constantly in the public eye by Australia's commercial/public totalitarian press. In fact the reflection on the Australian press is not just its journalistic ethics, but the fact that it is an integral part of the growth lobby and has major and multiple vested interests in it which are antithetical to democracy. (Examples are www.realestate.com.au and www.domain.com.au as well as lifestyle shows that push real estate and lifestyle retail daily down our throats.)

Bernard Salt on the difficulty in pushing a big population on Australians:

"The reason why this is important is that public policy is now determined by focus group. And this was proven by the ‘big Australia’ debate. Kevin Rudd said “I believed in a big Australia” on the 22nd of October, 2009 on the 7:30 Report. He did not repeat that claim for three months. He would’ve got off that set, and his minders would’ve said 'don’t ever use that term again.' They polled it, no doubt, and it would’ve come back 80/20 against. At 80/20 against, modern politicians, regardless if you are advocating, regardless if you are lobbying, regardless of whatever cosy relationships you have with whatever minister, if it’s 80/20 against, drop it! And that is exactly what happened over the following nine months. It’s hearts and minds. If you can get that 80/20 sentiment down to 55/45, then you have a case. Then you have a prospect of influencing policy in the 2010s. That’s how it works, I think." Bernard Salt

Transcribed under the supervision of a member of Sustainable Population Australia (SPA).

*During parts of this session Mr Salt was addressing the audience with aid of power point slides. The text of these slides, together with the times for which they are visible, is given just before the relevant section of the transcript of his talk. It is presented here as boxed text.

B. Salt – 00.04: Uh, my presentation today is Straightening Out B.A.N.A.N.A.S – power over populism.
B. Salt – 00.08: I’ll uh, explain exactly what I mean uh a little later on, but the essence is that I have a very simple proposition, and that proposition is that there has been an ideological shift in the Australian continent, community and people that is having a direct bearing on the performance of the property industry and the broader business community in Australia.
B. Salt – 00.28: I call it the rise of negativism over positivism.
B. Salt – 00.32: And there is no point lobbying, advocating, doing anything in Canberra, with a minister, whatever, unless you get in there and grab, make change at the grass roots level.
B. Salt – 00.45: It is now about how the average Australian thinks.
B. Salt – 00.49: And the mistake that the property industry and that the business community has been making, I think, over the last decade is that you need to actually engage with the people.
B. Salt – 01.01: It is no longer an option to sit back and do nothing.
B. Salt – 01.06: Don’t give the issue oxygen.
B. Salt – 01.09: We have tried that, and it ain’t workin’.
B. Salt – 01.13: That’s my proposition.

Build Absolutely Nothing Anywhere Near Anybody 01.14-01.53
or
The Negativism versus Positivism Debate

02.03-06.23 Development site on the edge of Sydney
Local meetings staged for local media
Council staff ‘scared to make a call’ ... ‘don’t want bad press’
Intimidation and hysteria are the preferred MO of action groups
Local councillors fearful of vocal groups as they have to live among them
We are living in the era of the professional objector ... if business doesn’t defend itself then negative sentiment expands into a PR vacuum ... mum & dad believe the sentiment
Public policy now determined by focus groups – Minerals Council proved this last year

06.23-06.37
‘The reason why someone like me doesn’t complain is I know it will affect my next project dealing with council ... and it may affect financing as bankers don’t want to hear there was a problem with my last project’ – Brisbane developer

B. Salt – 06.24: The reason why someone like me does not complain is I know it will affect my next project dealing with council.
B. Salt – 06.31: And it may affect financing as bankers don’t want to hear there was a problem with my last project.

06.38-10.53
The way forward?
Industry bodies need to be players not observers of the debate ... ‘doing nothing’ is no longer an option
Set up a think-tank in concert with other industry bodies:
Articulate participants in the debate
Counter negativism in all theatres – press, blogs, meetings
Active in the ‘hate blogosphere’
Can be called to ‘balance debate’ in specific areas
Intellectual and participatory
Commission ‘Pulse Survey’ of attitudes to development every 6 months in major markets
Cost? $2-3 million p.a.

16.30-17.54
Do State Governments still deserve a piece of the policy pie? Would problems around politicisation of development be simplified though greater consistency in approach that could be delivered with Federal Government policy formulation and Local Government execution?
‘Tall Poppy Syndrome’ is endemic in mainstream Australian culture and runs deep to our convict and European roots. Australia is increasingly reliant on the Asia region, which proudly celebrates success. If Australia doesn’t move from negativism to positivism how will Australia look in 20-30 years?

The industry is negative

"Every time you do not say something, every time you do not speak out, then negative sentiment expands, and it’s not just the property industry". Maybe the reliance on an economy based on property development and rapacious population growth is obviously negative. No matter what you say, the victims must be silenced by insults and manipulated through social engineering. This demeaning assault on democracy and public opinion must be resisted and exposed for what it is. Democracy has descended into a system to support the wealthy elite and their profits rather than a voice for the public.

I am at a holiday resort and yesterday I bought a Bernard Salt book for 50c. Started reading it last night, but got bored almost immediately. I think I might have reading on paper fatigue syndrome. ..or is Bernard Salt fatigue syndrome? It says on the page before the title page that he is "one of Australia’s leading advisors to the property and development industry and for almost 2 decades his commentary on demographic trends , aimed at business, has been widely reported in the national media.” That says a lot about the national media doesn’t it? Happy to report someone whose comments are aimed at business but not so happy to report those whose comments are just scientific or aimed at the common good.

It's interesting that the compound, sodium chloride, (common table SALT) is also the one that is fatiguing our land as an effect of excessive demands for water and the flogging of the whole system for larger yields for ever larger human populations.