Labor MP David Bradbury must correct error riddled conservation funding announcement (NSW), says Geoff Brown, Stable Population Party candidate. Mr Brown, who is a New South Wales natural conservation activist, has long fought to retain Cumberland plain woodland against attempts by governments to allow it to be destroyed for massive suburban developments. He believes now that the ALP has tried to take credit for his concept of the Cumberland Conservation Corridor. Geoff is running as a candidate for the Stable Population Party. 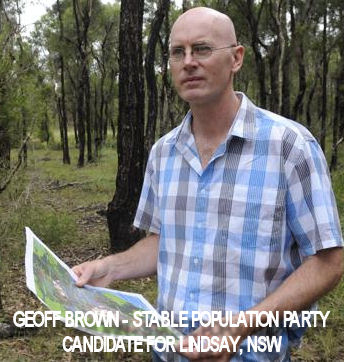 Mark Butler, the Federal Environment Minister, and David Bradbury, Labor member for Lindsay and the Assistant Treasurer, have been called on by Geoff Brown, the Stable Population Party candidate for Lindsay, to set the voters of Lindsay straight, after Lindsay's leading local newspaper, the Penrith Press, printed a half page story riddled with errors and misinformation about Labors 2010 federal election commitment of $7.5 million towards the establishment of the Cumberland Conservation Corridor.

Geoff Brown, also the President of the Western Sydney Conservation Alliance, developed the concept for the Cumberland Conservation Corridor in 2005, and at the 2010 election ran as an Independent using preference negotiations with Labor and Liberal to extract the $7.5 million deal from Labor. So he is on top of this issue. Several articles published by candobetter.net show his record on this matter. See Cumberland plain woodland and Geoff Brown.

Brown described himself as "livid" when he read the Penrith Press article which erroneously stated that Labor had announced $7.5m towards establishing the Cumberland Conservation Corridor. He said the article made it look as if Labor had just made some new 2013 committment. He said the voters of Linsay would be confused.

"The story should have been about why it took 3 years to fulfill their 2010 commitment. The article was littered with errors based on the dubious media release put out by David Bradbury and Mark Butler. If not corrected it will let Labor off the hook in Lindsay from announcing any new local conservation funding outcomes for the 2013 election. Labor may try to fudge their way out of it”.

Geoff Brown called on David Bradbury and Mark Butler to front the voters of Lindsay and tell them:

" - That neither Labor nor Liberals have yet promised any new conservation money in Lindsay for the 2013 election
- The announcement cited by the Penrith Press was from the 2010 election and it took 3 years to cobble together an outcome
- The Mulgoa biobanking site stays in private ownership so will not become part of the publicly owned Mulgoa Nature Reserve. So no net public benefit or use for education
- The Mulgoa site was never at threat of development and was already protected under Penrith Councils LEP which zones it E2 Environmental Conservation (I argued that money be better spent trying to conserve bushland in Penriths north at risk of development)
- That nearly half of the $7.5 million was spent on land care projects that are outside the Lindsay electorate and nowhere near the proposed Cumberland Conservation Corridor. Projects such as those in the Blue Mountains and the Cranebrook wetland project are not anywhere near the CCC
- That $3.4 million funding for weed removal and the planting trees is exactly what Tony Abbott proposes with his Green Army and Direct Action policy. This outcome condones the Liberals policy
- That 2000 ha of local bush land has not been protected (David’s MR and his letterbox propaganda claims he has saved 2000 ha of local bush land. He is claiming to have protected the 558 ha Airservices Australia land at Shanes Park and 1300 ha of bush at the Orchard Hillls Defence Establishment. These sites are not formally protected. Shanes Park has the proposed Castlereagh Freeway running through it)
- That biobanking is a scheme whereby there is a net loss of habitat. Bushland gets bulldozed with developers offsetting that clearing by funding the management of bushland elsewhere. In this case the State funding came from the clearing of critically endangered bushland in the Sydney Growth Centres. It is a highly dubious method of conserving nature.
- That the land owner is not raising his income from selling the biobanking credits. He gets a guaranteed $6.6 million as the joint Federal and State funding has already purchased the credits."

Geoff Brown added that Labor has been caught out trying to change the location of the Cumberland Conservation Corridor. As an example he cited the wetlands at Cranebrook near the Waterside housing estate as being 'nowhere near' the CCC.”

Mr Brown says that Lindsay voters need to be aware that Labor has not yet committed any new money towards conserving bushland within the Cumberland Conservation Corridor.

Mr Brown met last week with Mark Butler and David Bradbury calling on them to fund the protection of 1500 ha of Priority Conservation Land north of the ADI Site that is threatened. He says that the 50 ha of Mulgoa land was already zoned for protection but this 1500 ha of bushland has no such conservation zoning.

In his opinion, the only way it will be zoned for conservation by Penrith Council is if there is money on the table to buy it.

"The voters of Lindsay need to join with the Stable Population Party in calling on Labor and Liberal to commit to protecting this land.”

A better, not a bigger Australia 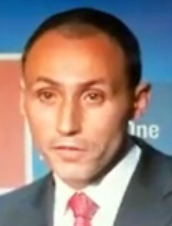 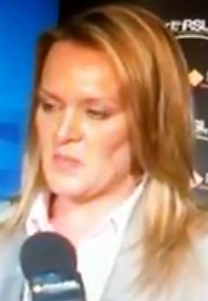 At a recent "Meet the Candidates" night for the far Western Sydney seat of Lindsay, Geoff Brown, an environmental activist and local resident since 1974 and Stable Population Party candidate for Lindsay asked the major party candidates, David Bradbury for the Labor Party and Fiona Scott for the Liberal Party to explain their population policies.

Whilst both major party candidates candidates ducked and weaved around the core question of population, Fiona Scott, to her credit, argued for direct action, including community grass roots level environmental repair to fix the environment in preference to the supposed macro-economic incentive of the "carbon tax". This is contrary to the prevailing economic dogma that everything can be fixed through free-market mechanisms. The "carbon tax" is supposed to create an economic incentive to individuals and corporations to burn less carbon. The extra expense has caused people on low incomes to not turn on heaters in during times of sub-zero temperatures in winter or to turn on air conditioners in summer when temperatures reached 46ºC. 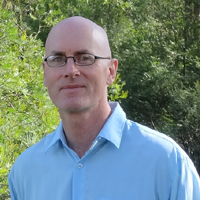 Near the end, when asked, Fiona Scott claimed that the Liberal Party supported a reduction in emissions by 2020 to a level 5% less than the carbon emissions of 2000. It was pointed out that Liberal Party leader Tony Abbott had ruled that out only two days ago!

No "balance" in population vs environment

Tony Abbott says that the Coalition will take immediate and concrete steps to repeal the Carbon Tax if they win government. He claims that repealing the Carbon Tax will ease cost of living pressures on families, help small business and restore confidence to the economy. Within a fortnight, the Finance Minister will introduce legislation to shut-down the Clean Energy Finance Corporation. Climate change will force greater costs of health care due to more diseases and weather extremes. There will be higher energy consumption through increased use of air conditioning and heating, and higher costs for food. Extreme weather patterns will increase the cost of insurance and planning regimes to account for greater risks. Four degrees warming of our planet would trigger severe economic, environmental, and social disruptions. Our environment is not divorced from or independent on our economy. The economy is a subset of the environment. To cater for economic benefits, and growth, wilderness areas are being ever encroached on, for mining and economic developments. Costs of living are being forced upwards by population growth. Network and infrastructure charges are totally unbalanced with the amount of energy and water consumption. Land prices are escalating, and blowing out the costs of housing. Australia is in debt for infrastructure for about $500 billion due to population growth. There's no "balance" between population and the environment! The ageing population can't be addressed by more population growth! Many migrants are ageing too. It's Ponzi pyramid of growth, and the "problem" of ageing numbers is due to high rates of population growth, and it's assumed that the solution can be the same as the cause!

You can see both of these candidates sweating trying to answer these population questions they probably don't know much about and which they wouldn't get asked very often anyhow (since in all major parties it is accepted without question that rapid population growth = good). So they just trot out staple party lines about aging population - which is absolutely inevitable after any period of growth, as the commentator above points out (and which continued growth will only make worse) and how Australia has done well at achieving a "balanced" growth (at 1.6% or more! Any growth is unsustainable long term, but growth of this magnitude is unsustainable for more than a few decades). I'd like to see someone with a complete understanding of these issues debate these or other politicians and take their arguments apart piece by piece.

Update (10:16PM, 21 August 2013): Fiona Scott's 'Direct Action' proposal had already generated a number of stridently critical responses. They include: Direct action examined and found wanting of 16 Aug 2013 by 'Brian' on (the otherwise wide-of-the mark) http://larvatusprodeo.net, The black hole in Tony Abbott’s frat party climate policy of 15 Aug 2013 by Giles Parkinson, Greg Hunt rejects 'silly' Climate Institute report on Direct Action policy of 15 Aug 2013 by Emma Griffiths and Monique Ross on ABC News. (None of these articles, for all their merit in other regards, address population growth, BTW)

On reading Giles Parkinson's article , it was apparent that #comment-77655">Fiona Scott's proposal for Direct Action was far too small to be an effective response to the treat of global warming:

It’s hard to find anyone who takes its proposed replacement policy, Direct Action, seriously – based as it is around one known constant – a 15,000 strong, litter-collecting green army.

Nonetheless, unless the carbon tax or emissions trading schemes, which these artciles favour, force the scale of coal mining in Australia, particularly in Queensland and New South Wales, the United States and elsewhere, to be reduced to a small fraction of its current massive size, then these schemes aren't going to stop global warming.

To stop global warming, governments will be left with no choice but to take Direct Action against the coal miners and force them to reduce their output.

It should have been obvious that Fiona Scott's 'Direct Action' proposal was far too limited in scale to have any hope of stopping global warming.