Video of William Bourke's speech inside. William Bourke is the President of the Sustainable Population Party. In this speech he covers a broad range of issues relevant to the population debate including: political donations and the power of vested interests, growth lobby spin, the world's biggest tower, GDP, Victoria's deteriorating economic base, the economic importance of natural capital, single issue politics, and a potential way forward for the population debate through a national vote by plebiscite.

Timothy Laurence is the only relevant and fresh candidate in this by-election in retiring (but not shy) Kevin Rudd's old seat. Relevant because he is the only one talking about the problems of population growth here, whereas the media and Tweedledum and Tweedledummer constantly promote the problems as if they were some kind of boon. Anyone half-awake knows that self-government, rights and freedoms, as well and the environmental beauty and health of Queensland are being buried in the ongoing tsunami of high immigration and growth-lobby activities to cater for it.

Despite being officially launched in 2010, it's the 7th of September 2013 that will see the real birth of the 'population party'. William Bourke, the leader of the Party, says, "We champion a difficult but critical cause - misunderstood by some, and misrepresented by others.

Labor MP David Bradbury must correct error riddled conservation funding announcement (NSW), says Geoff Brown, Stable Population Party candidate. Mr Brown, who is a New South Wales natural conservation activist, has long fought to retain Cumberland plain woodland against attempts by governments to allow it to be destroyed for massive suburban developments. He believes now that the ALP has tried to take credit for his concept of the Cumberland Conservation Corridor. Geoff is running as a candidate for the Stable Population Party.

Reporting on the Australian elections by the ABC is Orwellian. If it sends chills down your spine then you will understand why candobetter.net is so keen to publicise political alternatives, especially any that promise a civilised halt to the overpopulation juggernaut to which Tony Abbot and Kevin Rudd have hitched their evil stars. This article promotes information about the candidate list for the Stable Population Party. The introduction was written by Sheila Newman, who has also filmed their Victorian candidates.

This article features videos of the four Victorian based candidates for the Stable Population Party - Jill Quirk, Clifford Hayes, Michael Bayliss, Steven Armstrong and Jonathan Page - not necessarily in that order. It is very interesting to see what the candidates have to say and how they present. Australians have a chance of making a crucial difference by voting for these candidates in the Senate and in the lower house for the next Federal Election. Candidates are also running in other states. Check this website for details: http://www.populationparty.org.au/templates/pop/page/page_html_standard.php?secID=210

Saturday 29 June 2013 was the Melbourne launch of the Stable Population Party Australia.
Its leader, William Bourke, gave the following interview.

"Let me return to my old primary school, St Joseph's convent [in Cloncurry]. Saint Mary McKillop, I'm sure, was just like my principal, Sister Thomas..." Bob Katter's book, while retrieving some good Australian ideas and paying its respects to our ancestors, also markets big population ideas uncannily like those of B.A. Santamaria.

Limiting baby bonus payments to each woman’s first two children would mean that the majority of people with two or fewer children would not be subsidising those who choose to have larger families.

The Stable Population Party Australia is reaching out to members and sympathisers in a series of networking events across Australia. Should be interesting and fun to meet like-minded people and help to organise a coordinated electoral response to the growth lobby that has taken over our country. (Candobetter Ed.)

Stable Population Party Australia has finalised its core values and posted them to their website. In 2012 they say that they will be calling for new policy suggestions that align with these party values. Take a look... 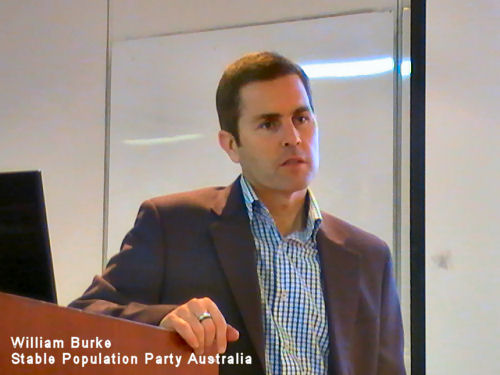 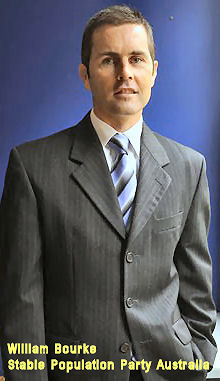 On Monday 17 May I interviewed William Bourke about himself and his party and his views on the politics of the current population debate. 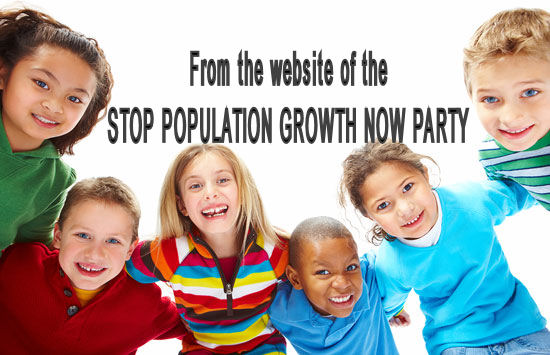 The article about SPPA in today's Australian (20 April 2010) is an indication of the profile public dissatisfaction is giving the population issue. The Australian is a self-admittedly big population advocate, and so it is interesting to see how the new party, Stable Population Party of Australia, has been reported.