ALEPPO, SYRIA. 12 July 2015: The water crisis is getting bigger. We are boiling water and cooling it to make it clean to drink. A couple of days ago, the Syrian Government took over all water from the water sellers, who are blackmailing the people and asking expensive price for the water. Government and military officers distributed 500 litres per household for free. This pleased many but annoyed others who wanted more and were ready to pay for it. Yesterday's water prices doubled! Many say that the water (which comes from a dam on the Euphrates, which is under the terrorists' control) reached the Sleimaniyyé sector of the city, where the distribution station is located. So it needs couple of days to reach to our house. 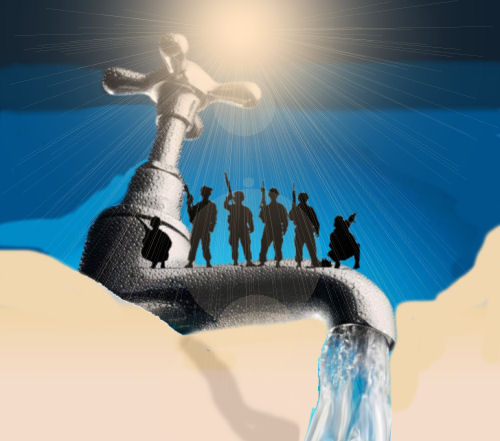 Water is life! Without it, we can't clean, drink, wash... Without it, everything is pale, dry, dusty, smelly, and thirsty.

I cannot be sure of exactly what is happening in this water crisis, as I can only see part of the situation. My understanding is formed from what others tell me and other sources. I have observed military personnel requesting peoples' IDs, and filling blue forms to show which house has had its share and which hasn't. However some people claim that some pro-government officers took the water by force and allocated it to their own homes and those of their relatives and friends.

Anything is possible, but I didn't witness this and most of the taxi drivers I rode with over the last three days were happy with the government's solution and free distribution policy.

To put good policy or law into practice is another problem in Syria, because of the breakdown in organisation. I saw unruly crowds asking for their free share of water.

Rumour-mongers are par for the course, talking about people who tricked government officers to have double or triple the amount of free water, by using different friend's ID's pretending that they are neighbors. Again, everything is possible. In such a crazy crisis, there are no rules and ethics. Government, water sellers, and people. We can say that at least 20% of each group is deceptive and corrupt. As we know, negative humans don't notice the good 80% among the people or government, but they keep complaining about the corrupted ones.

Misusing water, from all sides, is another problem.

So as you see, it is hard to be completely optimistic about the situation. There is much confusion and each person notices what s/he wants to see. People who mistrust the pro-government militias and government officers can't believe that they are really distributing water for free, but I personally saw and heard that in the last 3 days. Others don't trust ordinary people. But no-one trusts the water sellers!

The day after the last attack on 2nd and 3rd July, the terrorists (by whatever names they call themselves) occupied part of the Scientific Research Centre outside Aleppo, which is located on big piece of land and has several buildings. The important stuff in the Scientific Research Centre had been evacuated some time ago, early in the crisis. The centre had then been occupied by the Free Syrian Army for several months, until it was liberated by the Syrian Army. Now, since this last huge attack of 2nd and 3rd July, the terrorists managed to occupy part of it. Battles have been ongoing since then, but there has been no big news, and things have cooled down somewhat.

Declining groundwater is a big problem

Groundwater is extensively used right across the Australian continent, and poses serious threats to humans that need it to drink, crops that are irrigated with it, and natural ecosystems that rely on it for their survival. Two satellites, launched in 2002, are able to make detailed measurements of the Earth's gravity field in the Gravity Recovery and Climate Experiment (GRACE). For the first time ever, large-scale assessments of the changes in total groundwater store within massive aquifers at monthly, seasonal, annual and inter-annual time-scales. Over 700 million people in 43 countries suffer from water scarcity today. The United Nations predicts that by 2025, 1.8 billion people will be facing absolute water scarcity. The demand for groundwater is impacted by population growth, urbanisation, agricultural irrigation and the effects of climate change. Mass production of grain and other food supplies is draining aquifers beyond sustainable capacity. GRACE Satellite Mission Indicates Global Groundwater Diminishing (24/6/15) | Future Directions Rain-starved California is currently tapping aquifers for 60 per cent of its water use as its rivers and above-ground reservoirs dry up, a steep increase from the usual 40 per cent. In Australia, the Canning Basin in the west had the third-highest rate of depletion in the world, but the Great Artesian Basin to the east was among the healthiest. The difference, the studies found, is likely attributable to heavy gold and iron ore mining and oil and gas exploration near the Canning Basin. Those are water-intensive activities. In a report written by insurance companies, it claims that with the world’s population set to hit nine billion by 2050, demands on the Earth to meet food and water supplies could be stretched so tightly humankind will implode on itself; causing civil wars, relentless terrorism and heightened weather events that will leave the world in tatters. Food security and water security are euphemisms for overpopulation, a Malthusian crisis that it taboo to mention! Water and food and other natural resources are the next weapons that can be used to hold nations to ransom, and weaken their defences. Bye, bye birdie: Civilisation will collapse in 2040, apparently (23/6/15) | News.com.au