The US proxy war on China via North Korea

Since 1945 the Korean people have been at war. Shortly after the establishment by anti-Japanese resistance fighters of the Korean People's Republic that was to become the government of North Korea, in Seoul, the US has been at war with North Korea both technically and in reality. The most bloody chapter in that war was the three year war between 1950 and 1953. In this war, approximately 20% of the population of North Korea perished in fighting under aerial bombardment, through biological warfare and flooding. Many hundreds of thousands of their allies in the South also perished at the hands of the American occupiers and their south Korean puppets. The Korean Peninsula was divided up between the United States and Russia after the defeat of the Japanese. Under President Roosevelt the arrangement might have been temporary, but President Truman's cold war politics furthered the desires of military-industrial-complex's ambition to enforce capitalism on the whole world and the Korean War was a part of this. 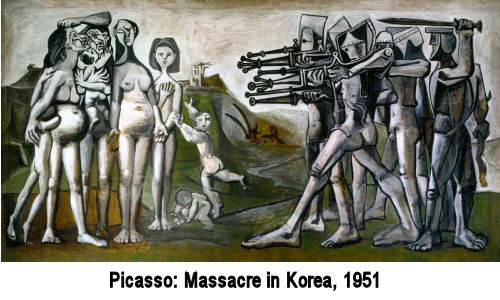 Back to the future

It's back to the 1960s. In 1962 with the Cuban Missile Crisis, children learned that they might be snuffed out at any time. The assassination in November 22, 1963, of President John F Kennedy, who prevented the threatened atomic war with Russia over Cuba, seemed to make this clearer.

Someone we knew who was 11 when Kennedy was assassinated, suicided in their late 20s because they had never recovered from despair at the prospect of the nuclear holocaust destroying all the forests and creatures in the world, along with the species that had unleashed this insanity.

But the first and the last nuclear attack on a country for war purposes was when America bombed Hiroshima in August 1945, although many 'tests' have since been conducted. (See Arms Control Org's nuclear test tally.)

President Trump presented no reflection about North Korea's motivation to acquire these nuclear weapons. In that sense, if you knew the story, it was like hearing a drunk threaten to punch his wife if she tried to protect herself.

Trump is sitting on top of a mountain of nuclear warheads and the US has armadas of warships constantly patrolling Korean waters in a threatening fashion. That is what Kim Jong-un is responding to; the current US military presence and the past record of occupation and war by the same presence. North Korea does not have ships patrolling US waters.

A few years ago the United States threatened to annihilate Libya if Gaddafi did not give up defending the state against rebel attacks. He insisted that he had complied, but the United States financed people to go in and assassinate him and tear his country to pieces anyway. (See "Book Review: Destroying Libya and World Order by Francis A. Boyle")

Basically, the United States invades any country it wants to, unless that country has nuclear weapons. It has done this on similar pretexts already to Afghanistan, Iraq, Libya, Syria and constantly threatens Iran. It would do it to Russia if Russia had no nuclear weapons. Indeed it has Russia quasi surrounded by US military bases, many situated in Europe in countries where the local populations may not want them. The United States has "800 military bases in more than 70 countries and territories abroad," yet it pretends that Russia, which has ten foreign military bases, close to its own borders, is the one bent on military expansion. China has one military base in Djibouti and several in process in the Pacific on artificially augmented islands.

History of US attempts to stop the nuclear arms race

When President John Kennedy stopped nuclear war on Russia via Cuba, President Kruschev and he talked on the phone and began a nuclear weapons disarmament program in 1963. See https://www.jfklibrary.org/JFK/JFK-in-History/Nuclear-Test-Ban-Treaty.aspx. In 1996, 71 nations, including those possessing nuclear weapons, signed the Comprehensive Nuclear Test Ban Treaty, which prohibited all nuclear test explosions including those conducted underground. Though it was signed by President Bill Clinton, the Senate rejected the treaty by a vote of 51 to 48. With the dissolution of the Soviet Union in 1991 much of the impetus for a nuclear program seemed to disappear. Perhaps the United States really thought that Russia was going to become a subservient client state, like Australia, but Russia has its own history and traditions. It has not gone back to communism, but it does not seek the same kind of free-market regime as America and does not want NATO on its borders.

The United States does not appear to accept this political and economic independence in Russia or China or, indeed, in any state. Hence their ramping up of nuclear threat when people hoped it was reducing. Now, today's young people must live in that terrible shadow of nuclear holocaust again, and some will lose hope. 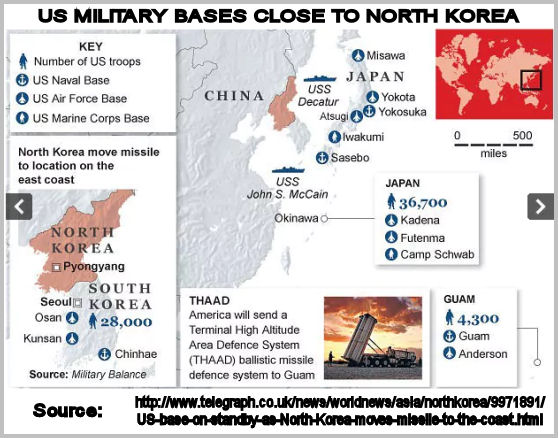 US role in Korean war and massive loss of Korean life

North Korea has been under siege for about 72 years since the Japanese colony of the Korean Peninsula was divided in two between Soviet and American occupation forces after Japan surrendered in 1945. In August 1948 the Republic of Korea was established in the south with Syngman Rhee as President. In September 1948 the Democratic People's Republic of Korea was established with Kim Il-sung as Premier. In 1949 Kim Gu, a Korean independence activist who wanted a unified Korea was shot in his home by a South Korean Army lieutenant.

The United States say that North Korea invaded South Korea and so the United States went to war against North Korea. North Korea says the war started when the South launched an attack against the North and so the North counter-attacked. But that in itself is not the critical issue. The critical issue is that sovereignty in the south was violated by the US occupation and thousands, maybe tens of thousands of supporters of the 'North' Korean government were murdered and jailed by the South Korean government with the help of the Americans.

Something like 20% of North Koreans died in the subsequent war. They were victims of America's massively disproportionate firepower. America only agreed to a truce because China and North Korea were able to resist with their own firepower until US loss of lives (much fewer than those of North Korean soldiers) became unpopular in America. Australians also participated in this war and at one stage Australian warfies blackbanned supplies to the Australian armed forces.

Understandably North Korea sees the continuing presence of US military armadas for the threat that they are, along with annual US military 'exercises' on South Korean soil.

Meanwhile just about every US ally (or are we US hostages?) mass media and much of the supposed alternative newsmedia, including Infowars, Hannity and Tucker Carlson, is reporting all this as Trump portrays it, vis, that North Korea is insane and threatening America with no reason at all.

No, Kim Jong-un does have a reason.

If America does not lead nuclear disarmament and stop its expansionism, which is what Trump led people to believe he would do, then who can lead it?

'Natural News' calls for the US to "deal with North Korea NOW"?!

Over the last several years, I've repeatedly warned that North Korea posed a grave threat to the civilized world. It's now clear that North Korea must be dealt with in an aggressive way, even if it means causing collateral damage. South Korea, Japan, Taiwan and the United States are all now potential targets of Kim Jong-Un's nuclear strikes. Given that Kim has openly stated his intention to launch nuclear strikes on key U.S. cities, there's no justification for any delay in acting out of national self-defense to stop this threat.

My video explains why President Trump must deal with this threat immediately, without delay:
...

In the video referred to above, Mike Pence repeats the completely unsubstantiated claim, denied by Iran, that Iran possesses nuclear weapons whilst disregarding the fact that Irael, which is supposedly threatened by Iran's supposed nuclear weapons, illegally possesses a large arsenal of nuclear weapons. (I attempted to post the following to that site, but was unable to deal with its authentication.)

I think it appalling that Natural News is now actually calling for military aggression by the United States against North Korea.

The Government of 'North' Korea was founded by Koreans who had resisted the Japanese invaders prior to and during the Second World War, whilst the government of 'South' Korea was composed of Koreans who had collaborated with the Japanese invaders. Between 1945 and 1950, the American occupiers and their South Korean accomplices brutally repressed Koreans opposed to their rule. killing tens of thousands. North Korea lost 20% of its population as a result of America's invasion between 1950 and 1953. As Doctor Strangelove (aka General Curtis Le May) once boasted, not one building more than one storey high was left standing at the end of that war as a result of the ferocious aerial bombardment of North Korea by American B52 bombers.

Every year, North Korea faces the prospect of a repeat of that experience, or worse, when the American occupiers and their South Korean accomplices conduct their annual practise invasion (sorry, 'military exercise'). Why shouldn't a country which has been through all the experiences that North Korea has, possess whatever is necessary to deter America from yet more military aggression?

I would be most interested to so how Ron Paul, whom Mike Adams claims to sympathise with, responds to the above article and video.

The myth of a "good" Korea and a "bad" Korea

Like most Koreans, the farmers and fishing families protested the senseless division of their nation between north and south in 1945 - a line drawn along the 38th Parallel by an American official, Dean Rusk, who had "consulted a map around midnight on the day after we obliterated Nagasaki with an atomic bomb," wrote Cumings. The myth of a "good" Korea (the south) and a "bad" Korea (the north) was invented.