Melbourne for Wikileaks (@melbourne4wiki) holds vigils for Julian Assange, every Friday, from 6:30pm until 8:30pm, under the clocks at Melbourne's iconic Flinders Street Station. Yesterday, Friday 19 February, I unfurled a canvas banner, 5 meters wide and 1.7 meters deep, with a big picture of Assange on it. No sooner had we raised this banner than we heard loud cries of support for Julian Assange. Support also came from cars, whose drivers tooted their horns, as they drove past the station. (See video below.)

After some time, in which members of the group handed out leaflets and and spoke to passers-by, a succession of people spoke through a megaphone. I was the third speaker. The video of that 7 minute speech was filmed and uploaded to YouTube and is embedded below. Unfortunately the recordings of two other speeches were lost and can't be included here. (I will transcribe my speech soon and include it in this article. Note that in the part where I argue that Julian Assange could not get a fair trial in East Virginia, I said this would be because the "jury was likely to be made up of employees of US intelligence services and their siblings." I meant to say, of course, "employees of US intelligence services and their relatives.")

Thanks to everyone who told me my hat looked terrible. I promise never to wear it again.

I'm here today to show my outrage at the fact that the Australian government has done nothing, while this heroic, courageous and visionary journalist, Julian Assange has been illegally held in prison, illegally psychologically tortured and now, illegally physically tortured because no reason other than the fact that through Wikileaks, he was able to tell the world what the United States didn't want us to know about what they were doing in their own grubby political world and other countries like Afghanistan, Iraq, Syria and Libya.

Now, because the world knows so much more about what the United States has been doing, it means that they are not able, so easily, to make up a pretext towards another war against another country.

Now, Julian Assange is an Australian citizen. To report the crimes of the Americans and their allies is not a crime. It's journalism.

To speak the truth is not a crime. It's journalism.

But, in the eyes of the crooked, vile people, that are running the United States, and their allies, it is a crime for people to speak the truth about their crimes, and that is why they have been trying, since 2010, to get their grubby little hands on Julian Assange and they have done that through subterfuge with the help of the crooked Swedish government and the London government, they've fabricated a charge that Julian Assange had sexually assaulted these two women in Sweden.

In the United States there plan was to try him in secret before a jury made up exclusively of people from East Virginia, who are mostly working for intelligence agencies or their siblings. [4] So it is unlikely that this so-called jury would have [inaudible ] paid any attention to the argument of Julian Assange's defence team. They would have taken about 30 seconds to pronounce him guilty and once Julian Assange had been found to be guilty, their plan was to lock him in jail for 175 years and in his prison term he would be confined to a single cell for 23 hours a day and allowed outside for only one hour a day. [5]

He would be denied any books, any Internet, anything. His life would be an absolute misery. The people he would be in jail with would be convicted terrorists and other murderers.

The prospect of this was so terrible for Julian Assange that he was clearly thinking of committing suicide rather than allow himself to be locked in jail for 175 years.

Now, all this time, for the last 10 years, the Australian government has said almost nothing. It's been ages - weeks since the Australian Prime Minister, Scott Morrison, has said a word about Julian Assange. All he has said is, "Oh, it's going on in England and it's not really our business to interfere with what the British courts are saying."

Not a word about the complete travesty of justice that Julian Assange is facing with the fact that every day he is brought to court - every day he was tried - he was brought to court inside a cage. He couldn't speak to his lawyers. He couldn't pass notes to his lawyers. He was stripped several times and searched each day before he went into court.

Clearly, this Australian government, that's supposed to have a duty of care towards Australian citizens, doesn't want to know.

They're turning their backs on Julian Assange and doing nothing.

Any government that allows another government - the British government, the American government - to treat any of its citizens, that have committed no crime, in this way, doesn't deserve to be in power.

And what we have to do is, when every member of Parliament asks for your vote at the next election, ask that member of Parliament: What have they done for Julian Assange for the last 10 years whilst an innocent Australian citizen, who has committed no crime, has been tortured physically, [6] confined illegally and psychologically tortured? Where have they lifted a finger for Julian Assange? Ask them that question and it will be amazed if any one of them can talk to you with a straight face.

What you have to do is you have to find some candidates who do have a backbone and do have principles who are prepared to stand up for Julian Assange. Find those candidates, vote for them.

So what we are going to do is to continue to hold these vigils every Friday night. We're going to try to reach a larger and larger audience, get more and more people to these vigils and these protests and make our voices so loud that it will be impossible for the Australian government to ignore and continue to do nothing for Julian Assange.

It's about time the Australian government acted. If they had a backbone. If they had any decency in them, here's what they would do:

Now the Australian government has done nothing. They've barely said a word about Julian Assange these last ten years. Any word they say is to cast aspersions on Julian Assange.

None of these people deserve your vote. None of them deserve to hold office. Make sure you act on that at the next federal election. Thank you. 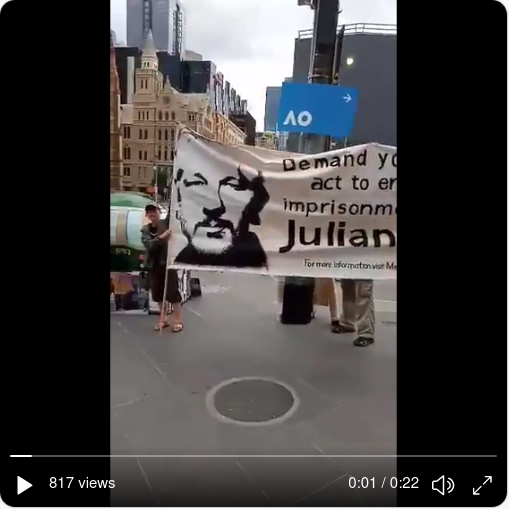 [1] On the previous Friday 12 February, I had not gone to the vigil due to the sudden and unexpected, if short-lived, outbreak in Coronavirus infections on that day. On the Friday prior to that, Friday 5 February, the banner had been made with only one tubular canvas slot at each end into which the supporting dowel poles with which it could be held up for display could be inserted. Unfortunately, because of the banner's great size - 5 meters x 1.7 meters - one pole at each end was not sufficient to support the banner. A third tubular canvas slot was needed in the middle. As a workaround, I stood behind the banner (as pictured right) and held it up with my raised arms hands in the middle. After some time this fatigued me and we chose to place it flat on the ground facing upwards. (The image is linked to a short @melbourne4wiki tweet which contains a short video from which that image was copied. That tweet was re-tweeted by "Denver Free Assange" (@DNVfreeJA) The following Friday wooden poles to support the banner were inserted into its three long narrow vertical pockets, as you can see in the video.

[2] Correction: Julian Assange is, himself, a journalist and not a whistleblower.

[3] Corrrection: In fact the WMD fabrication that was used to start the war against Iraq in 2003 was not exposed by any whistleblower or Wikileaks. United Nations weapons inspector Scott Ritter. Scott Ritter, who had previously uncovered Iraqi chemical weapons, argued in 2003, that chemical weapons in Iraq didn't exist in quantities substantial enough to pose a threat. He consequently opposed the 2003 invasion of Iraq but, for most people, that news was overwhelmed by the vast amount of corporate newsmedia reporting in favour of the invasion of Iraq.

[5] Julian Assange would be allowed out for only one hour every day into another adjacent cell as small as his main cell for exercise.

[6] Correction: During his illegal detention inside the Ecuadorian embassy, which lasted 6 years and 10 months (19/6/12 - 11/4/19) Julian was psychologically tortured, but not physically tortured. This changed after Julian Assange was dragged out of the embassy on 11 April 2019 and imprisoned at Belmarsh. There Julian Assange was subject to both psychological and physical torture.

[7] Monday 22 Feb 2021, 7:47AM +11 : Upon further reflection, whilst the British government's imprisonment and torture of Julian Assange is clearly illegal, Julian Assange's release is unlikely to occur simply as a consequence of a contingent of Australian Federal police officers attempting to enforce Australian law and international law on British soil.

However, were Australian Prime Minister Scott Morrison to speak to British Prime Minster Boris Johnson to demand Julian Assange's release, I think it highly unlikely that the British PM would not accede.

If Boris Johnson did not agree to release Julian Assange, Scott Morrison would have this recourse: He could threaten to take the case to to the International Criminal Court (ICC) or to the United Nations. The ICC would almost certainly find the United Kingdom's treatment of Julian Assange illegal, if not criminal.

If Julian Assange's case were ever brought to the United Nations, the United Kingdom's odious complicity with the US government would be clearly shown before the whole world.

In the high likelihood that Boris Johnson would then agree to release Julian Assange, Scott Morrison should then send a contingent of Australian Federal Police to escort Julian Assange from Belmarsh Prison back to Melbourne in order to safeguard him from any further malign behaviour by any agent of the United States government.

This is how a decent and humane national leader would behave.