Planning for overpopulation - do we really need it?

Is the Department of Planning in the Victorian State government vital to our lives or is it just part of endless population growth ? The Planning Department operates with a seemingly remarkable ignorance of the realities of resource (especially oil) depletion, some apprehension of climate change, scant reference to the environment, and no mention of creatures other than humans. Something funny's going on. 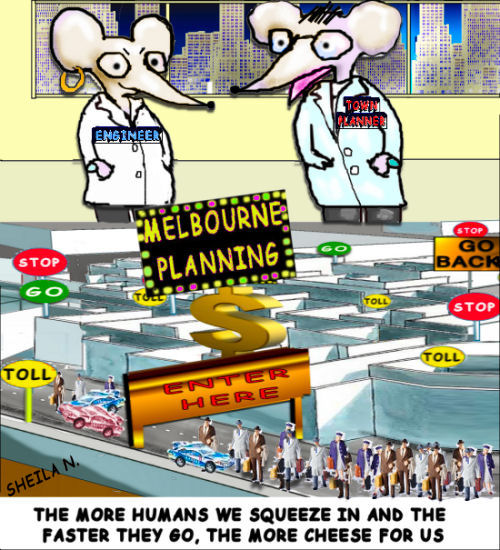 A friend and I recently were discussing disconsolately the current Victorian State Minister for Planning’s zone reforms and the department’s Metro Planning document "Melbourne, Let’s talk about the future." The purpose of both seem to be to facilitate more development, to make life easier for developers and to remove obstacles. I maintained that the more development that is allowed, the more disruptive the activities will be and the less certainty residents of Melbourne will have of the continuing amenity of their surroundings. Au contraire, they will live with the certainty that their amenity will decline.

My friend tends not to be rebellious but, like a lot of people, can see that there are powers behind the scenes at work in our lives. She came out very firmly saying, “Well you’ve got to have planning, other wise you will end up with a hotch-potch of development." The more adamant she was about this, the more I wondered if what she said was indeed true. 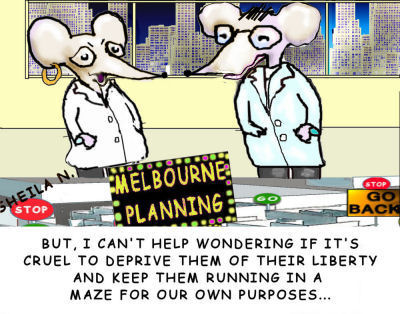 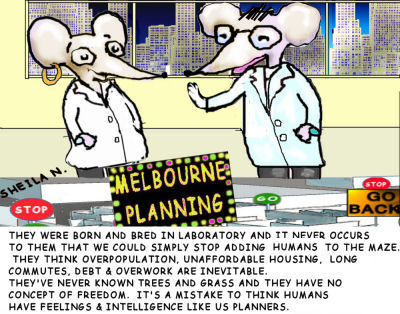 Planning in its current form seems to be all about accommodating population growth. It is about more and more human activities, buildings, roads, bridges houses. But does planning need to be exclusively about more of us and more of what we do, continually modifying our natural environment and pushing out other species?

What would our Department of Planning do if growth was slow or non existent? Would the planning Department be able to justify its existence? What sort of changes would then need to be planned for? There could be changes in the age structure of the population which might require different services. But are these the domain of the planning department? Couldn’t the Department of Human Services take care of this? Then there are changes to the types of energy sources that must be provided. Energy is privatized in Victoria but the Department of Primary industry now has the role of overseeing energy distribution and invests in new technologies (according to its website).

Because of past and present population growth, Victoria and all of Australia is way behind with infrastructure provision, so the Planning Department could put their minds to this and, for the first time in our lives, we might be adequately provided for in this respect. Or could an ‘Infrastructure department” take care of that? With a stable or near stable population, houses would still need to be built for a time as there are not enough roofs to cover the heads of the current population. Could the Planning department focus on that? Or would housing be best in the hands of the Department of Human Services? It is after all a basic human need. It would not make a terribly impressive glossy coloured document, but the homeless would be impressed.

With rapid population growth as we have suffered for the last decade, which of the State government ministers gets the most press attention? I think it is the Planning Minster. This attention is not a compliment to him nor to his predecessor though. They both hit the news because development decisions are controversial and permanent in nature with a few winners and many more losers.

With a stable or very slowly growing population, planning would no longer be “famous” as it is now in Victoria. Would it even be necessary as a separate entity?

Those in power need to look to the future because they make decisions that endure long term. The Planning department seems to respond to the greed and desires of the growth lobby by facilitating growth. With superficial buzzwords and motherhood statements in the document “Melbourne, let’s talk about the future,” the Planning department foreshadows a real shock for residents of regional towns such as Geelong and Ballarat. With the mantra, “Planning for regional city growth is vital,” the Department glibly writes off our future hope of livability by embracing growth like an adored relative and with a seemingly remarkable ignorance of the realities of resource (especially oil) depletion, some apprehension of climate change, scant reference to the environment, and no mention of creatures other than humans.

Sheila Newman has just published new theory in a new book, Demography, Territory & Law: The Rules of Animal and Human Populations (see link). Forensic biologist, Hans Brunner writes of it: "This book takes us to a completely new paradigm in multiple species population science. It shows how little we understand, and how much we need to know, of the sexual reactions when closed colonies with an orderly reproduction system are destroyed, be it people or animals." Two chapters are on multi-species demography, the rest apply the theory to non-industrial societies and the author comes up with a completely new test for the collapse model of Easter Island, which will stun those who thought they knew all about it.

“You’ve got to have Planning” (with a capital P)?

Let’s try life without it.

In Planning, Jane Monk and

In Planning, Jane Monk and Adrian Salmon are examples of the permanency of bureaucratic decision makers vis-à-vis the transitory nature of Ministers. Their vision of a high density mega-Melbourne has overridden that of the public. In fact Jane is now a director of the Metropolitan Planning Authority. Recently she was quoted in the Herald Sun as having said, "dividing the city into five sub-regions would allow councils to avoid parochial decision making." This assumption that only distant authorities may make decisions about anything is quite mad and antithetical to democracy. In a world where relocalisation is thought by many to provide the best democracy and energy logistics long term, this kind of elitist bureaucracy should be denounced and trounced. Finally the fees for foreign buyers of Australian property are going to go up, but not nearly enough. They will go up to a few thousand dollars per million only. In Singapore the fees are so steep that they have greatly reduced this scourge which Australian politicians have failed to protect us from. http://news.domain.com.au/domain/real-estate-news/foreign-buyers-set-to-be-hit-with-steep-fees-to-buy-australian-property-20150225-13ob2a.html and another http://www.abc.net.au/news/2015-02-25/foreign-real-estate-buyers-to-pay-fees-up-to-10000-dollars/6260748 So there is a little improvement in Australia, but not nearly enough. Still the real estate people and developers want it all their own way; they are convinced that they have a right to inflict their way of making wealth on the rest of us and they resent any attempts to claw something back or restrain their avalanche of concrete. Although Asia has protections against foreign development, Australian developers already sell about half of Australian property to Asia. If you go there you can see the advertising. Or just look at some foreign internet publications. http://news.domain.com.au/domain/real-estate-news/jail-threat-for-developers-who-market-all-their-apartments-offshore-20150226-13parn.html