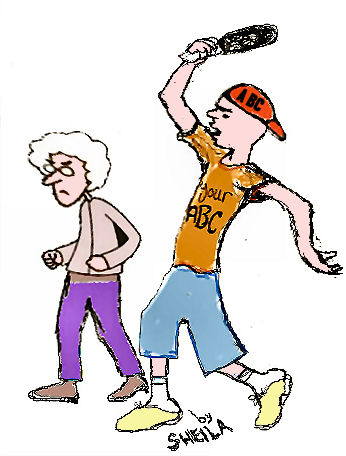 The article "Baby Boomers Hog Housing Market" on ABC News and quoted on ABC local radio 15.8.08 runs the serious risk of engendering intergenerational resentment. In the report, "Baby Boomers" (people born between 1945 and 1960) are bagged for using the equity in their first homes to buy subsequent investment properties, thus driving up the cost of housing and depriving later generations of being able to afford a roof over their heads.

The article is sparked by information reported by the Financial Services Institute of Australasia.

It seems the blame for declining housing affordability is being laid on a whole generation (easily identifiable by their appearance as most of them are in their 50s) whereas one would be more justified in laying the blame on those who have successfully lobbied governments for very high population growth - mainly through immigration.

It is well accepted that high immigration and housing construction lagging behind the added demand that comes from immigration, is the main reason for declining housing affordability. Real estate pundits and governments admit this readily. Who would plunge themselves into debt to purchase an investment residential property and deal with the hassle of maintenance and tenants, if one did not think it would be financially worth while? The prices were already rising because there are more people needing them ! Far easier to buy some easily liquidated shares and not have the hassle!

"Working families" in their fifties who have 2 or 3 mortgaged investment properties are, as I would see it, defensively taking the crumbs they can afford in order to fund their retirement and to bequeath something to their children.

It is quite possible that many of those who lobby for population growth are in the "baby boomer" category. To blame, however, all the ordinary people in that age bracket who need to invest wisely for their retirement, not to mention those many baby-boomers without homes or superannuation, is to blame the victims. They are certainly not the main beneficiaries of rising property prices.

Coincidentally there are reported serious concerns that many people of this BB generation will have insufficient means to fund their winter years.

An article also on ABC News 4.8.08 by business editor Peter Ryan and headed "Survey reveals baby-boomers' retirement cash fears," makes one wish that more of them were able to provide adequately for themselves. Seems they are damned if they do and damned if they don't!

The August 15th article is mischievous and its conclusion is spurious. It concludes that one generation is to blame for the fact that declining housing affordability affects those who don't yet own a house and who are generally in a younger age group.

This is simplistic and sensationalist.

If the blame was laid at the feet of a particular religion or ethnic group, rather than an identifyable age group, there would be outrage and complaints to the Human Rights and Equal Opportunities Commission.

Housing crisis - blame it on the boomers?

A thought provoking article, quark. It's a pity that Australia's national broadcaster has fallen into the mode of superficial analysis that formerly characterised the Murdoch press, in particular. But let's face it, anything divisive is sensational. And journalism just isn't sexy unless it's sensational. That Australia has a housing affordability crisis is beyond doubt. But is it fair to lay the blame on baby boomers? I don't think so. If we're fair dinkum about attributing responsibility for the current situation we could do worse than to examine the activities of the Property Council of Australia, for starters. While on the one hand urging rapid population growth and immigration, the Property Council simultaneously argues for a retention of negative gearing on investment properties. Now I'm not against people investing in property if they want to. But allowing the interest payments on multiple investment properties as a tax deduction, while not giving the same deduction to people buying a single residence to live in, seems unfair to me. A bit like Robin Hood in reverse.. In addition, allowing tax deductions for property diverts investment away from more socially useful investment, in areas such as renewable energy. At the same time, the PCA (consistent with most business lobby groups) sees population growth fuelled by mass immigration as an imperative to address Australia's so-called skills crisis. Coincidentally - no doubt - it's also a wonderful way to push up demand for property. Taken together, what you get is demand outstripping supply and property prices inexorably rising. Over the past 20 years, the Financial Services sector has been all over property investment like a rash. Books with titles like "Own 20 properties within 20 years" have sold like hotcakes and people have flocked to investment seminars run by property gurus. So it's no surprise that people have wanted to secure their financial futures through investing in property. But blaming those same people now for unaffordable housing is unfair and divisive. A responsible approach to the housing affordability situation would be to examine immigration/population, financial incentives like negative gearing and strategies like decentralisation in a coordinated way. But of course that's not nearly as sensational as blaming the boomers. .

Owning a dwelling that another needs to live in is exploitiative

As I demonstrated in the article Brisbane's housing unaffordability crisis spun by ABC to promote property lobby interests, also linked to above, the ABC has concealed from the Australian public how the property lobby brought about the current housing unaffordabilty crisis in the first place. I agree with the author and with Dave that for them to now turn around and blame one group for this human tragedy is contemptible.

Nevertheless, I think it does need to be acknowledged that some baby boomers have been able to gain massively from housing hyper-inflation at the expense of their fellow Australians, including, it should be also be acknowledged, other baby boomers. As result of economic growth and, more so, population growth, properties brought on the North Coast of NSW for example, for as little as hundreds of dollars back in the 60's and 70's and 80's are now worth millions.

In general, I consider any relationship where someone owns a dwelling that someone else needs to live in to be exploitative. Of course, this is a simplification as I know of landlords, who have worked hard to buy properties that others are able to rent from them comparatively cheaply. Nevertheless, notwithstanding these exceptions and the fact that many elderly people are now dependent upon rental properties for their retirement income, as the author has pointed out, I still think this situation should be actively discouraged, if not altogether outlawed by the Australian government.

A good start to ending this exploitative situation would be to remove the negative gearing concession granted to property investors, or, alternatively, to extend that concession to owner occupiers.

We have to find means other than property investment to provide for elderly people.