Here's something the Australian Press would probably rather not report on, so we had better, because it is very important.

Since Tuesday morning (31 March 09) four Caterpillar managers have been prevented by Caterpillar employees from leaving their director’s office in the Grenoble (France) factory, where 730 jobs are down for the chop.

The report opens with footage of Caterpillar’s human resources manager being allowed to drive out of the factory under medical orders for a cardiac problem after 8 hours of detention by Caterpillar workers.

Meanwhile the workers continued to detain four other managers on the first floor of the factory.

The negotiations began with only about ten workers early Tuesday morning, then, very quickly, a hundred took over the area and confronted their bosses with their demands for negotiations when they tried to leave. The bosses holed up in the offices.

The camera shows a lot of excited workers milling around in the large corridors of the first floor, outside the Director’s office where management has dug-in. 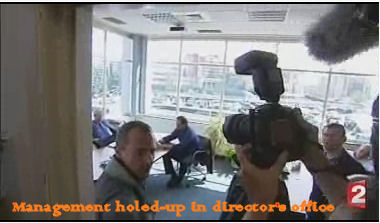 Suddenly the door of the director’s office gives way. The managers are there. They look haggard. 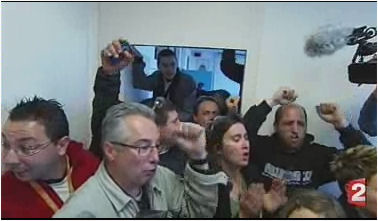 The workers surge in, boo-ing and whistling at them.

“We’re on strike. It’s not unemployment, thug!” a worker calls out twice towards the Director.

The Director General of Caterpillar France, with the almost unbelievable name of Nicolas Polutnik, mumbles incoherently something like, “ In the time to come … free… one could …. wait and see…in order to give a chance ...” It sounds a little as if he is avoiding making any legal commitment by talking nonsense. The press commentator remarks that the director could not come up with anything more. 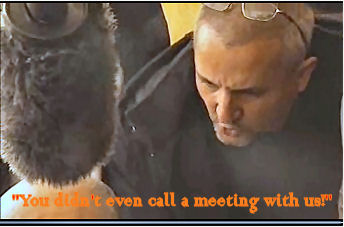 A worker berates the director from behind: “M le Directeur, you weren’t even capable of calling a meeting to discuss the situation …:”

This was the only solution that the workers could find - “Taking hostages” - as they call it, in the hope of having their voices heard. 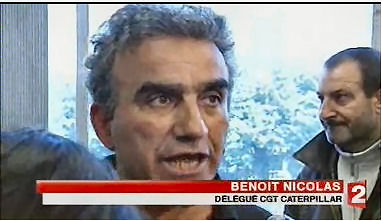 “What we want above all is an equitable sharing of the wealth which has been obtained through the living force of this enterprise, that is to say, the workers!” 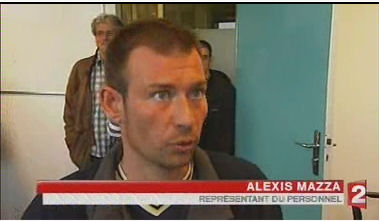 Alexis Mazza, representing the employees, said, “Today they [management] refuse to negotiate, therefore they will remain here, they will sleep here, in order to think things over, because you can’t flog workers like that! ”

No negotiation was able to be started on this day (Tuesday 31).

No doubt many corporations like Caterpillar, backed up by the same governments which have thrown taxpayers’ money at banks and big business, will be finding ways to communicate with the Caterpillar management at Grenoble. They will be telling them to hold out at all costs, because, if they give in and negotiate, workers throughout the world will see how easy it is to have the upper-hand on the hachet-men of the power-elites.

After all, there is really no reason to keep the management and owners of these factories. The workers could take over now and simply produce for local needs, or trade modestly where there was a need. The same could be said for most large enterprises like this. Vast profits are only necessary where the cost of land and rent are artificially pushed up by land-speculation, more of a problem in the English speaking countries which have different land-tenure laws from Western continental Europe. (And that problem, of course, urgently needs confronting.)

Four executives, including Nicolas Polutnik, Director of Caterpillar-France, have spent Tuesday through Wednesday nights held by their employees in the offices of their factory in Grenoble. About 50 employees relayed each other all night outside the executive offices on the first floor of the factory, then brought the four executives breakfast of croissants and chocolate bread. “We are humane,” one of the representatives of the union federation explained. Negotiations on a redundancy plan (PME - Plan Licenciement Economique ) should recommence on Wednesday morning at 9 am, with the elected members of the Committee of Enterprise (CE) and union representatives. Source: « Caterpillar: l'intersyndicale lance un appel à Nicolas Sarkozy » AP | 01.04.2009 | 07:54 Sheila Newman, population sociologist home page

Australian media is about local news because it's cheap

Minimalist coverage of international news has cocooned Australians into a mindest that, like imposed on Americans, local news is sold as more newsworthy. By consequence, the public are herded into a mindset that what our local leaders in Australia say is the best headline of available leadership. Media companies make money because the advertising revenue exceeds the cost of news and programming. News reach, news quality and newsworthy prioritisation is irrelevant to profit, so our media doesn't go there and the government provides no incentive for Australian media to do so. TV sheep are fed cheap grass, grass is cheap and media advertisers get their coverage, so the industry profits. The migration of TV from news to 'info-tainment' is because the infotainment can be targeted to a known demographic which sells better to advertisers. So while the negatives of globalisation impact us, our media denies us access to the benefits of globalisation - lessons from overseas. Local myopia feeds local myopia. Bring on internet TV so I can watch France 2 and even Al Jazeera. SBS is still juvenile and Australia's media spin various versions each night of the same home grown tabloid sensationalism - as if Bikie Gangs, AFL scores and misbehaving sportsmen matter? Check these serious news sites, except but you won't find local junk food and Harvey Norman adverts, sorry! http://info.france2.fr/economie/53022779-fr.php http://english.aljazeera.net/

Video of French Caterpillar workers' fight for jobs (in French)

Am sure there must be some news about this in the English language press. The text below from the Radio Canada site, basically says that some workers in France, fed up with the increasing number of layoffs everywhere in the
country, have resorted to kidnapping or locking up their employers. One of the richest men in France, a certain François Pinault (reminiscent of François Pignon, a stock character in French comedies, a fool) had to be freed from his captors by the police, as a group of enraged protesters had surrounded his car and taken him following a restructuring plan with 1200 layoffs. And in Grenoble, 500 employees of Caterpillar kept four company officers locked in their offices for 24 hours. The liberations happened after a night of "negotiations". In addition, some executives of a 3M factory, and a Sony subsidiary were also taken for several hours by their employees.