All around Australia, indeed all around the world, towns are fighting against having huge costly marinas foisted on their communities and much loved beaches. It is about time that someone founded an international anti-marina association to coordinate democratic movements against unsustainable business proposals for locally unwanted marinas .

Below we reproduce correspondence between the Frankston Beach Association Inc to the Hon. Justice Madden MLC, who is Victoria’s current Minister for Planning. It was the latest in Frankston community’s attempt to make itself heard in a more than 30 year battle to prevent a marina from being forced upon the community. The letter was a response to nine dot-points made by the Minister in an attempt to justify the [many times reproposed] marina in question. Ed.

"Frankston Beach Association Inc.
Preserving the beach for all to use" 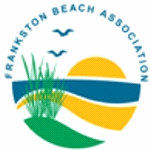 Detail of your correspondence was conveyed to us by Mr. Alistair Harkness, MP. A copy of this January 30 correspondence is attached for your reference.[1]

The Frankston Beach Association is puzzled and disappointed with the statements made in the nine points in your correspondence, responding to our 17 December 2008 Submission relating to the proposed C50 Amendment.

None of the 'nine points' in your correspondence, directly address the financial, environmental and social concerns and issues that we have clearly detailed in our Submission of 17 December 2008.

Rather, these 'nine points' appear to be a clumsy attempt by the three Authorities referred to in your correspondence, ie., Frankston Council, the DSE and Tourism Victoria, to justify their support for a grossly enlarged Marina at Olivers Hill, by falsely suggesting that their support is consistent with the previous EES and Advisory Panels' and Ministers' 'Recommendations'.

Is the Minister aware that the 'nine points' in several instances are inaccurate and misleading and appear designed to obfuscate important facts?

We briefly comment below, on each of these 'nine points'.

Justin Madden MLC wrote: “The concept of a safe boat harbour at Olivers Hill, Frankston has been actively supported by Council, the Department of Sustainability and Environment (DSE), Tourism Victoria and the boating industry.”

Since the formation of the FBA in 1982, no member of the Public has advised that they are in favour of providing a marina at Olivers Hill, at the cost of destroying the Frankston Beach and Daveys Bay.

i. On the advice of seven eminent scientists and coastal engineers will likely destroy Frankston Beach and cause Daveys Bay to silt up? and

ii. Is more than twice the size required to accommodate the boating and retail, commercial and industrial activities prescribed by the proposed C50 Amendment?

The activities proposed in the C50 Amendment can adequately be accommodated in the 15.8 hectare marina area currently approved.

This point states that Olivers Hill has undergone a comprehensive planning assessment and refers to the 1999 EES and the 2003 Planning and Advisory Committee Panel Reports, and the two Ministers' Assessments in 2000 and 2003.

This statement falsely suggests that the recommendations and standards prescribed in these Reports and Assessments are continuing to be adhered to.

In reality, Frankston Council, DSE and Tourism Victoria are paying little more than tokenism to these recommendations and through the proposed C50 amendment they are arbitrarily rejecting and disregarding many of the financial, environmental and social standards and recommendations prescribed in the Panel Reports and Ministers' Assessments.

Does the Minister accept that such conduct by these authorities is deceptive and misleading and makes a mockery of the State Planning Process?

Justin Madden MLC wrote: "The Frankston Planning Scheme was amended in 2003 to facilitate the provision of a safe boat harbour at Olivers Hill."

The Frankston Planning Scheme was amended in 2003 to facilitate the provision of a 15.8 ha marina including a reclamation area of 5.8 ha.

Justin Madden MLC wrote: "The Environmental Effects Statement (EES) assessed the impacts of rezoning 35 hectares of land and sea to a Special Use Zone for use as a safe boat harbour. The revised model proposed by Council encompasses 22 hectares and is still within the parameters initially tested by the EES."

This statement is totally incorrect and misleading.

The 1999 Environmental Effects Statement (EES) did not assess the impacts of rezoning 35 hectare of land and sea to a Special Use Zone.

The EES assessed two areas for a marina development ie., one of 6.6 hectare (option 2) and one of 15.4 hectare (option 3). The EES did not assess any specific area for rezoning to either a Public Park and Recreation Zone (PPRZ) or a Special Use Zone (SUZ).

The 2003 C15 Panel of Inquiry and Advisory Panel assessed the impacts of a 15.8 hectare marina within a 35 hectare PPRZ. The Panel recommended that a SUZ would be more appropriate than the proposed PPRZ .

Justin Madden MLC wrote: "In 2006, Frankston City Council completed a cost analysis for a preferred development model. The revised model identified more land to be reclaimed, a larger breakwater to increase the number of berths, the introduction of dry boat storage, an increase in parking provision, short term accommodation and increases to floor area for boat repairs and for retail purposes."

No credible cost analysis has been made public for the larger 22 hectare marina.

Contrary to the current Planning Scheme, no size limit has been specified in the proposed C50 amendment, on the amount of land that can be reclaimed.

As less than half the 22 hectare marina is required to accommodate both the prescribed 330 marina berths and the permitted commercial, retail and industrial activities including the stacked dry boat storage and 60 berth hotel, what additional activities are intended for the remaining unused area? (See points 4 and 7).

Council's revised model, described by the proposed C50 Amendment, contradicts and conflicts with the environmental, financial and social recommendations and standards determined by the 1999 EES and the 2003 Planning and Advisory Committee Panel Reports, and the two Ministers' Assessments in 2000 and 2003.

Justin Madden MLC wrote: "In May 2007, Council adopted a preferred development model for a safe boat harbour. I referred this model to the Priority Development Panel (PDP) for advice and evaluation."

The proposed C50 model recommended by the Priority Development Panel, differs from the 'Preferred Development Model' adopted by Council in 2007, following advice from their financial advisors, by removing the upper limit to the reclamation area.

What additional activities do Council, DSE and Tourism Victoria intend for the extra land inside the larger breakwaters? Will additional activities be offered and permitted as inducement to a developer? Will these activities include residential housing and more commercial, retail and industrial development? Will they also include an entertainment complex?

Has the Minister been advised of and considered these implications?

Justin Madden MLC wrote: "The PDP worked closely with key stakeholders, Frankston City Council, the Frankston Design Panel and representatives of the State Government including the DSE and Parks Victoria. Advice was sought on a number of issues including the environmental sustainability of the proposal. The Frankston Beach Association was also invited to make a submission during the process."

The Key Stakeholders were nominated by Council. In total they numbered approximately 13 organizations and 8 individuals.
Does the Minister consider this miniscule amount of community consultation adequate and appropriate in a community of approximately 150,000 persons, where many residents and visitors use the beach throughout the year, when the proposed marina is putting Frankston beach at risk?

The statement is made in this point that, 'Advice was sought on a number of issues including the environmental sustainability of the proposal'. This statement is meaningless. Who was invited to give this advice, when was the advice sought and on what part of the proposed marina development did the advice relate to?

Insufficient data is available on which to undertake these studies and data over a period of more than one year is required.
Are such flippant statements relating to environmental standards acceptable to the Planning Minister?

Justin Madden MLC wrote: "Frankston City Council will seek tenders from private industry to fund the construction of a safe boat harbour. State Government funding for public infrastructure through the DSE and Vic Roads Asset Management Program for slope stabilization at Olivers Hill and funding for boat ramps through the Boating Facilities Grants through Marine Safety Victoria may be made available."

The funding advice made in this point is contradictory to the funding information approved by Council and proposed to be placed in the Tender Documents.

Council's information in the proposed tender documents commits the Government to all public infrastructure funding, including Public Boat Ramps, and car parking and trailer parking and five boat launching ramps together with stabilization of Olivers Hill.

Is the Minister satisfied that Frankston Council has the authority to make this financial commitment on behalf of the Government, when development costs have not been determined?

Is the Minister aware that contrary to the current Planning Scheme requirements the proposed C50 Amendment fails to require the proponent to be financially responsible for beach restoration, sand bypassing and maintenance dredging costs?

Are Frankston Council, the DSE and Tourism Victoria being open with the Government and the Public with respect to the issues raised above?

Frankston Beach Association continues to harbour grave concerns as to the financial, environmental and social probity of this proposed development. Our main concerns relate to safeguarding Frankston Beach and Daveys Bay for the present and future use of residents and visitors to Frankston City.

A small number of self-interested parties continue to perversely push ahead with a so-called iconic development that will put Frankston on the map. This proposed development is flawed, and if it fails, the Frankston community will pay the price.
We are currently witnessing the financial failure of iconic developments world wide. The community of Frankston can ill afford a financial, environmental and social disaster on their doorstep at this time.

We respectfully request that our concerns carefully detailed in our 'Comments and Review of the proposed Frankston C50 Planning Scheme Amendment' dated 17 December 2008, be individually and properly considered and be factually responded to. 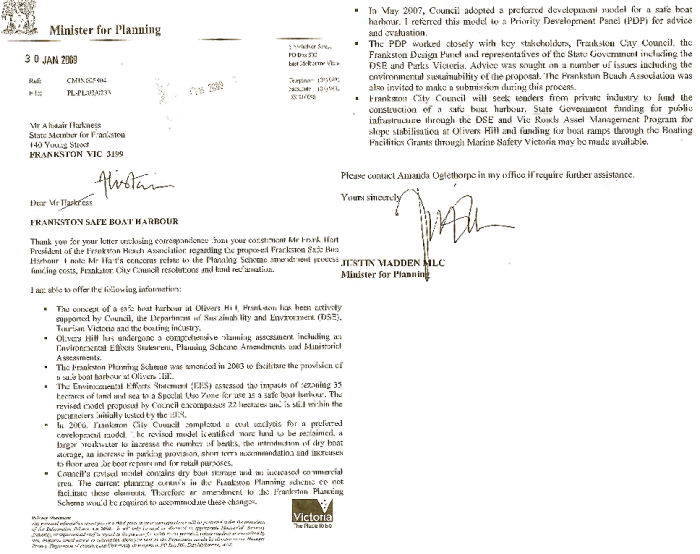 this document from Justin Madden, from which I have transcribed the nine dot points corresponding to the responses of the Frankston Beach Association.