Joe Toscano does the Murdoch Scandal and democracy in general - podcast

The latest Joe Toscano anarchist podcast dissects the reasons why the Murdoch empire needs to be toppled. Great listening and fundamental education. Also wraps up the state of democracy in Australia. 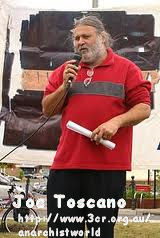 I'm sorry to say although I agree with the Prime Minister that much of Australian journalism is complete crap, I don’t agree with her when she suggests the problem is due to the 24 hour news cycle. The problems with Australian journalism and much of the journalism in the Western World has more to do with the concentration of ownership of the fourth estate in the hands of a rapidly shrinking number of players than technological innovation.

It’s no accident parliamentary democracies have traditionally highlighted the important role a free, independent and diverse media plays in the lives of free people while totalitarian regimes of all political hues fight tooth and nail to ensure only one political voice is heard via state controlled channels.

Corporate capitalism and the fourth estate

The emergence of corporate capitalism as the dominant economic force in the 21st century has destroyed the delicate balance that existed between government, the people and the fourth estate creating a climate that rewards political conformity, manufactures community consensus and subverts the idea ultimate political authority in a democratic society rests in the hands of the people not the state, the government of the day or that small section of society that owns the means of production, distribution, exchange and communication. The pathetic nature of political debate today is, to a significant degree, due to a handful of people owning the fourth estate.

Even a cursory examination of the 1854 Eureka Rebellion highlights the pivotal role a free, independent and diverse media plays in political transformation. Ballarat, a town of 20,000, was serviced by two newspapers, The Diggers’ Advocate and The Ballarat Times and Southern Cross while Melbourne, a city of less than half a million, was serviced by The Age, Argus and Herald. The political tsunami that followed the drowning of the Eureka Rebellion in a sea of blood by the colonial authorities would never have occurred if Victoria had not been serviced by a free, independent and diverse media during that period.

Julia Gillard, Tony Abbott and Bob Brown are in a position to change the political, social and cultural landscape in Australia once and for all

Julia Gillard, Tony Abbott and Bob Brown are in a position to change the political, social and cultural landscape in Australia once and for all. They find themselves in the unique position of having the community support they need to stop the parliamentary puppet masters dictating parliamentary policy. They find themselves in the position to uproot the few stunted perennials that blight political, social and cultural debate in this community and let a thousand flowers bloom by passing parliamentary legislation that forces media monopolies to limit their media holdings to 10% of the privately owned media outlets in a community. They are also in a position to pass parliamentary legislation that alters the Australian Broadcasting Commission’s guidelines so that a variety of opinions, not just the major political parties’ opinions, are brought to the fore in Australia in the publicly funded media sphere.

Source and more of this at http://www.anarchistmedia.org/current.html

Could Joe Toscano have affected the 1998 elections?

Direct Democracy not Parliamentary Rule Anti-parliamentary politics and the case against voting which features some material by Joe Toscano, is cause to doubt Joe Toscano's judgement when it was written back in 2001. Two articles which could only have harmed democracy and ordinary Australians given what we know of Australian history prior to them being written and since are An anarchist anti-election campaign - 1998 and Election 2001 - For Direct Democracy not Parliamentary Rule. John Howard won the 1996 elections giving many who voted for him the impression that he was not going to do anything too radical to Australia. After Howard won, he 'discovered' a huge 'black hole' in the Federal Budget, conveniently for him, concealed from the electors by Paul Keating during the election campaign. This gave Howard the excuse he needed to do what a number of commentators believed that he intended to do all along, that is to viciously cut back government programs and spending. I remember my own financial circumstances and career prospects having been seriously harmed by Howard's actions. The highly suspicious Port Arthur Massacre also occurred in 1996 soon after Howard was first elected. This gave Howard the excuse needed for him to change Australia's gun laws so that only police, the army and the rich had the right to own firearms. Of course, those prepared to break the law continued to break the law by owning illegal firearms so guns were not removed from the hands of criminals. Only ordinary, honest Australians had the right to bear firearms taken away from them. This undemocratic act, in fact, turned John Howard, whilst he was at the same time viciously attacking the poor economically, into the darling of Australia's "bleeding heart" anti-gun middle classes, who for months would not hear from me, one harsh word said against Howard. During his first term Howard, who had dishonestly claimed after his election defeat in 1993, to have completely abandoned any plans to introduce a GST, set up a sham Parliamentary inquiry into "tax reform". The purpose of the 'inquiry' was so obviously not to conduct an inquiry into tax reform, but, rather, to deliver a pre-set 'recommendation' for the GST that Liberal MP Paul Zammit resigned from the committee in disgust. In 1998, on script, the 'inquiry' delivered its 'recommendation' that the GST, that Howard promised in 1993 that he would never again try to introduce, be introduced. Howard closed Parliament early, and then called an early election before Parliament could be recalled. As a result the 'inquiry' report was not properly scrutinised by Parliament. As a result, Howard was able to make many claims about the 'inquiry' report during the election which were subsequently shown in Parliament to be false. Even so, he only just scraped back into power, in fact, losing the popular two-party preferred vote 48.5% to 52.5%, but that was all he needed to be able to inflict three more years of harm to ordinary Australians and democracy, just to begin with. This included his attempt 1998 to break the Maritime Union of Australia using mercenary strikebreakers. I do not know what impact Joe Toscano's anti-election campaign had on the outcome of the 1998 elections, but it most likely would have dissuaded some people who would normally have voted against Howard from voting. If it had any sizable impact, it could well have made the difference that would have allowed Howard to scrape back in. Joe Toscano's "anti-election campaign" may well have made it possible for Howard to launch his vicious attacks on Australians in his next three years of office. Of course, this is not to say that if Labor had won in 1998 it would have been any better than other 'Labor' governments in previous decades, but at least it could not have behaved anywhere nearly as nastily as the re-elected Howard Government behaved. Re-electing a government that has just beaten you with a steel bar is surely just asking to be beaten again. In subsequent years, the Howard Government was to launch the war against Afghanistan based on the pretext of September 11, participate in the illegal 2003 invasion of Iraq and, in 2005, attempt to take away collective bargaining rights that Australian workers had with his "Work Choices" act. If Joe Toscano's thinking back in 1998 and 2001 exemplifies Anarchist thinking in Australia, then it seems to be seriously flawed.