Australia second in world arms importer - did you know?

Australia is the world's second largest arms importer, according to the Stockholm International Peace Research Institute. Yet there are no armed wars in Australia and our local crime industry could not possibly use $1,677,000,000 worth of military weapons as estimated to be our imported value in 2010. Are we on-selling and who is involved? 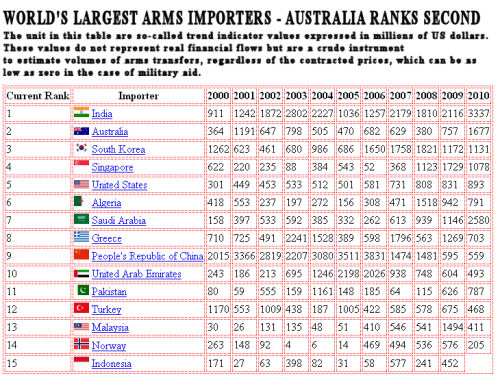 Okay, we're involved in a number of international 'peace-keeping' exercises, but how do we manage to make second in the world imports with India the first? What is going on? Are we on-selling and disguising the world traffic of these arms? Are we a middle-man for international war-mongerers? Makes little old John Howard's amazing popularity coup when he banned gun ownership for Australians look just a tad hollow.

"Australia’s rich want a greater share of this global industry. Particularly the governments of Victoria, South Australia, Queensland and the Northern Territory are vying with each other to be the most arms industry-friendly place in the Asia Pacific. Promoting the Asia Pacific Defence and Security Exhibition (since cancelled due to planned protests), organisers of this arms fair proudly announced in a press release in September 2007, that between 1994 and 2006 the Asia Pacific was the only region with increased defence expenditure as a percentage of GDP. It has been forecast that the Asia Pacific will overtake Europe and the Middle East, becoming the world’s largest arms market with US$104 billion of military projects scheduled in the next 10 years, of which US$25 billion is projected from Australia. Threats of instability and future conflict, real or imagined, caused primarily by the US “war on terror”, are driving this arms race." Source, "Dollars from Death, The Arms Industry in Australia, on the Direct Action site. (Direct Action sprang from what is referred to as Green Left which is the website of the party known as the Democratic Socialist Party (itself renamed from the Socialist Workers Party as it was known in the 1970s and 1980s, during which time it labelled itself Trotskyist. More on candobetter and socialism here.)

In 2003-07 Australia was [only] the eighth largest arms importer, accounting for 3.08% of world deliveries. Hamish Chitts writes "Most of this spending in was a result of Australia’s involvement in the occupations of Iraq and Afghanistan, but there has also been lavish spending securing Australia from the threat of mythical terrorists, and the big players in the arms industry have been quick to exploit this market."

Below is a record of the value of Australia's arms imports since 1960. The source of these figures was Indexmundi 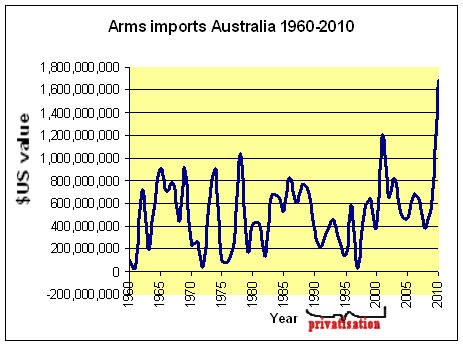 The The Medical Association for the Prevention of war (Australia) ascribes a rise in Australia's arms exports to the privatisation of our arms manufacturing industry. State-owned enterprises such as Australian Defence Industries (ADI), used to serve and supply the Australian armed forces. "Because of the program of liberalisation, the sector is now dominated by private, often multinational, corporations. The former ADI is now owned by Thales Australia, the local branch of the French-based Thales Group."

"After a protracted process ADI Ltd was privatised in 1999 passing from government ownership into the hands 50:50 partners Transfield of Australia and French defence company Thompson-CSF, later to become Thales." (Source: http://www.australiandefence.com.au/C89E4250-F806-11DD-8DFE0050568C22C9

The Medical Association for the Prevention of war (Australia) states, "A privatised military sector cannot be counted on to place national security, peace or human rights interests above the pursuit of profit. Ironically, a sales-driven arms industry is best served by the undermining of these very concerns." According to the same source, this Australian export arms industry had an estimated worth of $US45.6 billion in 2006."

Your views and knowledge sought to increase ours. Please comment.

Many gun owners in Australia

We are big users of firearms in Australia. There are many groups of people are are legally allowed to own guns. There are sporting shooters, ADF, Police, farmers, "game" hunters, security personal, and despite the controls, criminals are still able to access arms. Such is the violent nature of our society, crime, killing and intimidation are all part of our culture. The physical action of a shotgun involves a spray of pellets, and a flying bird can be wounded by even a single pellet. Other birds flying with the target bird can also be wounded. In Victoria, duck shooter numbers have drastically decreased from 95,000 in 1986 to about 19,400 . However, over the last few years, the numbers of duck shooters on the state's wetlands dropped to a very small number. Unfortunately, there are four states in Australia that still allow duck hunting, despite strong evidence of the extreme suffering involved. Every year, during the government-declared 'open season' many thousands of ducks are shot over the wetlands of Australia in the name of this ‘sport'. During the hunting season shooters in South Australia will be allowed to bag 12 ducks each day and, in the state's south-east, 25 quail. Tens of thousands of native animals and birds, including kangaroos, emus, wombats, kookaburras and cockatoos, have been legally slaughtered in Victoria in recent years. Landowners or managers who cannot resolve a wildlife issue by non-lethal means may apply for a permit to destroy or scare the animals. Inspectors don't even have to visit the property or provide non-lethal alternatives. On the other hand, conserving and protecting wildlife is very difficult and undervalued and underfunded. Victoria is largely in private hands and large swathes are already cleared and damaged. Roads, droughts, degraded habitats, and urban sprawl are taking their toll. The colonial-like mentality of land-holders with political-historical power, and the right to kill native animals, still exists in the Victorian government. It's hard to control crime and live in harmony, without the threat of violence, while so much killing is allowed - legally.