CO2 Group's Chief CEO, Andrew Grant says that anthropogenic climate change science is quite simple really: "It's a function of increased population on the earth." Candobetter.net received the following as a press release today. We obviously like the idea of wildlife corridors connecting national parks. By the same token, nothing in the corporate or the government area can be taken at face value. Until the corridors are established; until we can see that more is not taken away by related interests somewhere else, we have to remain cautious. Nonetheless, on face value, this is cheering news. So is the Chief CEO of CO2 Group's attitude to human population growth and carbon emissions. 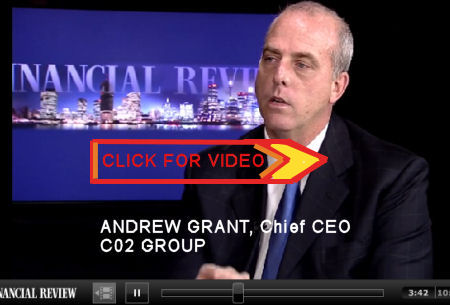 Asked by the Australian Financial Review interviewer, "What is your scientific understanding of human co2 emissions which are causing dangerous levels of global warming?", Andrew Grant, Chief CEO of the C02 Group, said:

"Well, it's really rather simple. It's a function of increased population on the earth and if you go back into look at population history for example it took from the beginning of time to 1880 for the earth to get its first billion people. Now we're at seven billion. Fundamentally what we have done is cut down 20 per cent of the world's forests and liberated that carbon into the atmosphere and then we've burnt fossil fuels at a rate where we've taken a large amount of carbon from fossil fuel reserves and put them into the atmosphere. So it's no more complex than that. As humans we have liberated more carbon at a rate quicker than the carbon cycle can handle. And it's not a good or a bad thing. There's no value based in this, but the simple reality of doing that is it changes global weather patterns. The debate really is not do we need to act? Even in Australia where it's very politicised, both parties say they support reducing emissions by 5 per cent by 2020. The debate is how."

Melbourne 8 May 2012: CO2 Group is pleased to announce it has been successful in gaining funding for two projects of the Federal Government’s Biodiversity Fund. The grants, worth $3.8 million, will support two projects in Western Australia and New South Wales.

CO2 Group’s Chief Executive Officer, Andrew Grant said: “We are delighted to receive these grants, which we see as recognition of the quality of our work in the Australian market and our deep environmental expertise.

“The two projects will integrate biodiversity outcomes with large-scale commercial carbon plantings, creating a unique partnership between a for-profit commercial entity and the government. A partnership of this nature and scale has not been attempted outside the not-for-profit sector,” said Mr Grant.

CO2 Group’s project in WA will contribute to the Fitz-Stirling Functional Landscape Plan, the Carnaby's black cockatoo Recovery Plan and also assist with the conservation of a range of other nationally and regionally significant conservation targets such as western whipbird, mallee fowl, tammar wallaby, western mouse, and black gloved wallaby.

Another CO2 Group project site in NSW offers an opportunity to commence consolidation of a chain of remnant vegetation stands along a 100km section in the Upper Central West and Plains of NSW.

All of the projects supported by the Biodiversity Fund will help to revegetate, rehabilitate and restore more than 18 million hectares of the Australian landscape over the next six years.

CO2 Group has a history of being a leader in its field and was the first organisation to achieve accreditation for reforestation projects under the NSW Greenhouse Gas Abatement Scheme and the Federal Government’s Carbon Farming Initiative. With 26,400 hectares under management across the country, plus 3500 hectares of native remnant vegetation, CO2 Group is the largest provider of dedicated carbon sink plantings in Australia. The company currently manages landmark commercial contracts for Qantas Airways, Eraring Energy, Macquarie Bank, Woodside Energy, INPEX Browse, Origin Energy, Newmont Mining and Wannon Water."

Please comment on this article and tell us what you may have experienced about this group and its work. Obviously this kind of investment seems infinitely superior to land speculation in its usual form, which is to clear land, build infrastructure and housing, then invite loads of people into the country in order to drive up the price of the housing. We don't see the downside of this kind of investment, except where it impinges on property rights and common land of indigenous and other Australians. But we could be naive. Obviously we have a positive view of a CEO who seems to understand the importance of human population growth in the creation of pollution/atmospheric change. Marketing companies, such as the one that sent the press release on, also understand that ecological blogs like that kind of statement. The Primeminister got support against Kevin Rudd for that kind of statement. How sincere is it? We don't know.